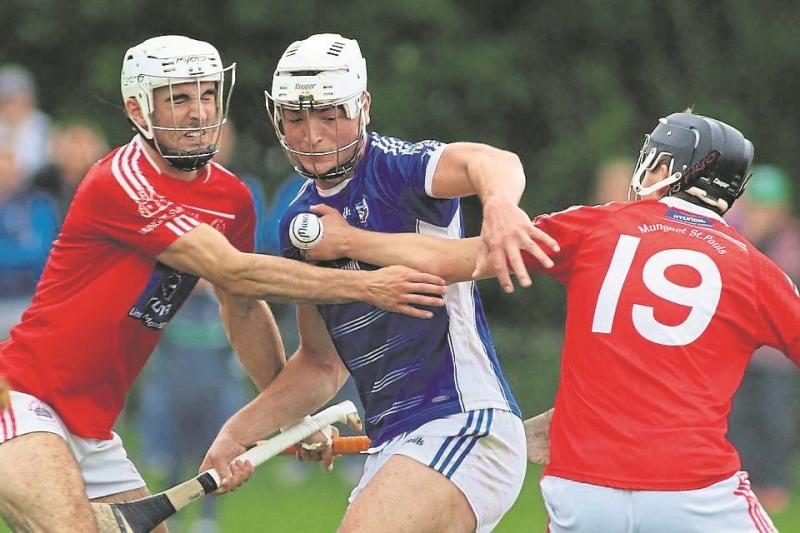 Kyle Hayes in action for Kildimo-Pallaskenry

A storming second half saw Mungret overcome Kildimo-Pallaskenry in round one of the Bon Secours Limerick senior club hurling championship.

Promoted back up senior after an absence of over 30 years, Mungret trailed by five points at half time but in the end found the final three points to secure a 1-16 to 1-13 victory in Clarina.

A Kyle Hayes goal helped Kildimo-Pallaskenry into a 1-8 to 0-6 half time lead.

It was an opening half in which Mungret failed to score from play - all six scores were Paul O'Brien pointed frees.

Points from free-taker Barry O'Connell, Cathal Downes and David Fitzgerald helped Kildimo-Pallaskenry into a 0-7 to 0-4 lead on 20-minutes.

Then Kyle Hayes soloed through the middle to goal and help his side 1-8 to 0-4 ahead with five minutes to half time.

Crucially O'Brien found two late points for Mungret to leave five between the teams at the break and it could have been closer but John Chawke saved from Barry Duff to deny the men in red a goal.

Five minutes into the second half, O'Brien cut in from the left and they did have a goal.

When Brian Barry and Brian O'Meara added points, the game was level for the third time, 1-10 each and 11-minutes gone in the second half.

Niall Mulcahy, who played senior hurling with Kerry this season, then had Mungret ahead for the first time with a neat point.

And, the lead could have been greater but Chawke saved a Paul O'Brien penalty after Mulcahy was fouled.

Kyle Hayes finished with 1-3 from play and his point levelled once more entering the final 10-minutes.

Mungret again surged ahead but O'Connell pointed frees left the tie level 1-13 each in the final minute.

But Mungret finished on top and points from subs Conor O'Halloran and Cian O'Brien either side of a Paul O'Brien score sealed their win.

Paul O'Brien finished with 1-10 (0-8frees) for Mungret, who play Ballybrown in round two, while Kildimo-Pallaskenry must regroup to face South Liberties.