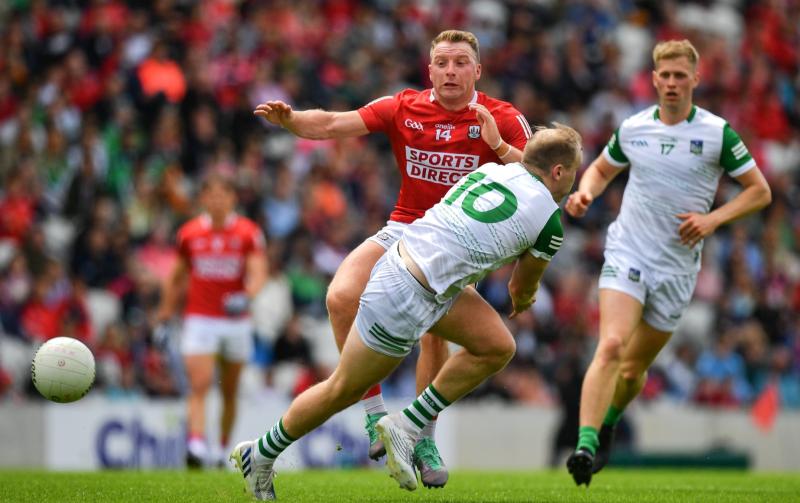 LIMERICK came up short in their bid to secure a first All-Ireland senior football quarter-final appearance in 11 years when suffering a 2-18 to 1-16 defeat to Cork in their Round 2 qualifier at Páirc Uí Chaoimh on Sunday.

Billy Lee's charges remained right in the contest when trailing by just two points, 1-15 to 1-13, in the 62nd minute when Cork had a player dismissed for two yellow cards.

However, a goal from a 65th minute penalty, converted by Brian Hurley, turned the game decisively in Cork's favour and helped the Leesiders into a five-point lead.

Limerick did manage to close the gap to within four points on two occasions subsequently, but the Shannonsiders were ultimately unable to reel their opponents in.

Cork, who led by a single point at half-time, 0-8 to 0-7, upped their intensity levels in the second period and deserved their victory in the end.

Limerick will take plenty of positives from their display, but will rue kicking 11 wides and an unfortunate black card in the second half which Cork made the most of, scoring 1-3 during the period their opponents were down to 14 players.

Limerick, who produced a much improved showing on their disappointing Munster final defeat to Kerry, last beat Cork in the senior football championship in the 2003 Munster quarter-final

Limerick and Cork were meeting for the third time in four seasons in the championship, with Cork having also won the 2019 and 2021 Munster semi-finals fixtures.

The Limerick starting line-up showed four changes from the one announced on Saturday morning.

Limerick trailed by just a single point at half-time, 0-7 to 0-8, despite playing into a strong breeze in the opening 35 minutes.

After wind-assisted Cork moved into an early two point lead, Limerick hit back with three successive points between the sixth and ninth minutes from Gordon Brown, Robbie Bourke and Adrian Enright.

Showing no hangover from their Munster final defeat, Limerick moved the ball impressively and were patient in working openings in attack.

Their first wide of the contest did not arrive until the 14th minute at which time Billy Lee's charges were tied 0-3 to 0-3 with their opponents.

Points from a Hugh Bourke free and Enright's second point from play had Limerick two to the good at 0-5 to 0-3.

Limerick also led 0-6 to 0-4 after 23 minutes when Enright landed his third point from play in a free-flowing, open contest.

However, three points in a row from Cork, two from Stephen Sherlock and one from Eoin Sweeney helped the Leesiders regain the lead 0-7 to 0-6 after 31 minutes.

To their credit, Limerick rallied and the rampaging Cian Sheehan kicked a smashing equalising point off his left, before Sherlock's pointed free had the home side one point to the good at half-time.

The Munster rivals were level, 0-10 each, 10 minutes into the second half.

However, a run of 1-3 without reply helping an improving Cork side take a grip on the game, the Leesiders goal coming from Cathail O'Mahony on 50 minutes.

To their credit, Limerick battled back and a smashing goal from Brian Donovan left three points between the sides, 1-15 to 1-12, with 10 minutes remaining.

Cork were then reduced to 14 players when substitute Paul Walsh was dismissed after been shown two yellow cards in quick succession.

However, Limerick, who can look forward to playing in Division 2 of the Allianz Football league next season, were ultimately unable to take advantage of their numerical superiority.