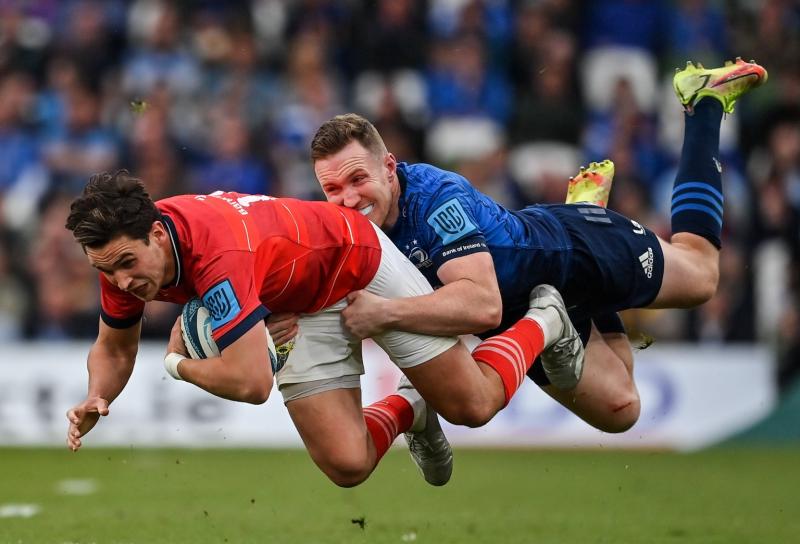 MISFIRING Munster Rugby missed out on securing home advantage in the quarter-final play-offs of the United Rugby Championship after suffering a bitterly disappointing 35-25 defeat to an understrength Leinster Rugby side at the Aviva Stadium on Saturday night.

Munster must now travel to Kingspan Stadium for a last eight clash on the weekend of June 3-4 after Munster fell to yet another defeat to Heineken Champions Cup finalists Leinster.

Saturday night's defeat in front of an attendance of 32,411 against a much-changed Leinster side saw Munster finish in sixth place in the final URC table with Ulster claiming third spot.

While Munster needed a win to secure a home quarter-final and a bonus point win to claim home advantage in the semi-finals should the side get that far, Johann van Graan's charges left the Dublin 4 venue empty-handed.

The defeat leaves Munster will plenty to ponder as Leinster rested their 'first choice' players for the contest with an eye on next weekend's big Champions Cup final with La Rochelle.

Munster will be anxious that the likes of Damian de Allende, Peter O’Mahony, Tadhg Beirne and Dave Kilcoyne can be fit in time for their trip to Belfast next month.

Leinster’s only defeat in their last 24 visits to Aviva Stadium in all tournaments was 17-25 to Saracens in the quarter-final of the European Champions Cup in September 2020.

Leinster led the latest interprovincial clash between these great rivals 15-12 at half-time.

The home side got off to the best possible start when easing into an 8-0 lead after just eight minutes with a first minute try from Scott Penny and a Harry Byrne penalty.

To their credit, Munster hit back with tries from Jack O'Donoghue and Mike Haley in the 11th and 16th minutes. Carbery converted the latter try to help the visitors into a 12-8 lead.

That score proved to be Munster's final points of the half after a smashing Leinster love saw scrum-half Foley dot down to give Leo Cullen's charges their three point interval lead.

Munster hit the front at the start of the second half when Murray sniped over for a try, while Carbery's conversion made it 19-15 to the visitors.

Byrne and Carbery traded penalties befpre Leinster were awarded a penalty try and a further five-pointer from Rory O'Loughlin put the game beyond Munster.