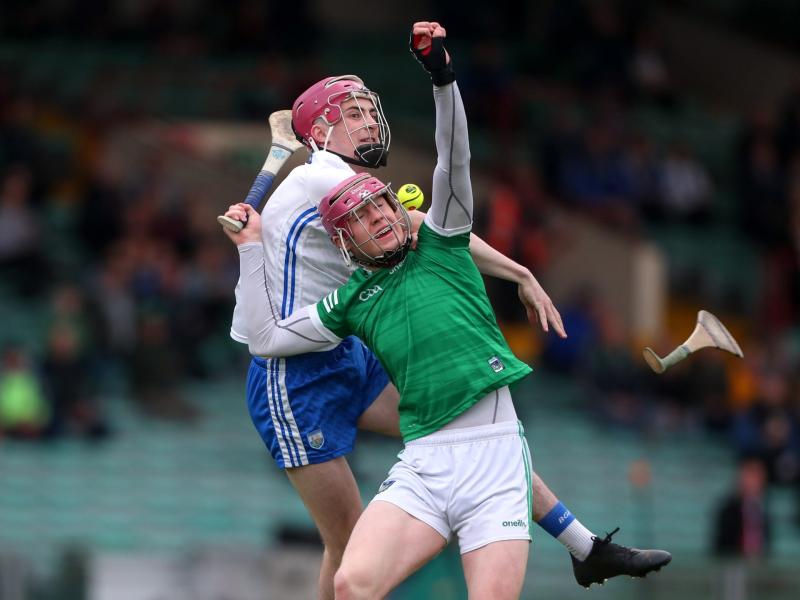 Shane O'Brien of Limerick in action against Josh Fitzgerald of Waterford. PIC: Sportsfile

LIMERICK booked their place in the Munster U20 Hurling Championship final this Wednesday evening with a three point victory over Waterford.

In the TUS Gaelic Grounds it finished Limerick 0-27 Waterford 3-15.

Limerick blitzed Waterford early in the second half with eight successive points to move 0-19 to 0-11 ahead but The Decies battled back with three goals in a nervy finish.

Limerick had five points each from play from Aidan O'Connor, Adam English and Shane O'Brien.

The game was level at 0-11 each at half time. It was an opening half in which Waterford had the aid of a slight breeze but any advantage was eroded with 10 wides - Limerick had just two.

The sides were level on eight occasions.

Limerick did have 10 points from play across six players.

Waterford hit the ground running and had two points scored before the Limerick account was opened in the fourth minute.

But the men in blue and white should have been further ahead but for six wides in the opening seven minutes.

Shane O'Brien and Eddie Stokes had points to get Limerick off the marl but Waterford again surged ahead.

But as the first half reached it's mid-point Limerick were ahead for the first time - Adam English, Shane O'Brien and Aidan O'Connor all with points from play for a 0-5 to 0-4 lead.

Further point from O'Connor and O'Brien had the home side 0-7 to 0-6 ahead but Waterford were still very much in this contest.

When they found their radar they moved back ahead to lead 0-9 to 0-7 inside the final 10-minutes of the first half.

Donnacha O'Dalaigh and Chris Thomas points looked to have Limerick heading to the dressing room in front until The Decies struck back once again in a half that swung from end-to-end.

It was a second point from Adam English that eventually sent the sides to the interval dressing room tied 0-11 each.

On the change of ends, Limerick went up a level and hit eight successive points from the throw-in.

English had the first two and then O'Connor had four in a row.

Waterford's first score of the new half didn't arrive until the 12th when it was a tonic goal that came their way - sub Cian Rellis finding the net.

English, O'Connor and Coughlan replied but Waterford went in search of another goal and were rewarded when another sub Jake Foley raised a green flag on 53-minutes.

But Waterford came coming and Patrick Fitzgerald fired home their third goal in injury time from a 21-metre free.

When he landed a point it was a two point game until O'Connor's 10th point sealed the passage into the final.