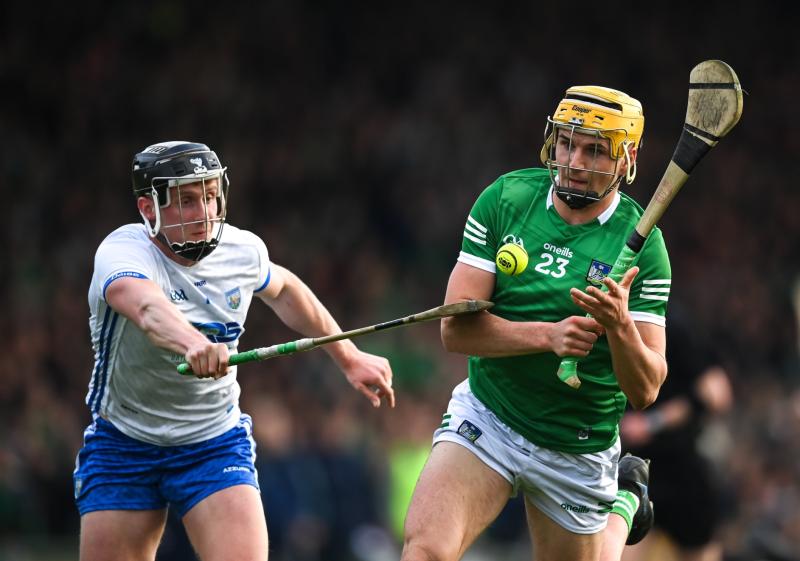 In the TUS Gaelic Grounds it finished Limerick 0-30, Waterford 2-21.

In a game in which the sides were level on nine occasions, Limerick scored the final two points to finally see off the challenge of Liam Cahill's side.

John Kiely's side move onto round three on May 8 when Tipperary come to town.

This victory was secured without the services of Cian Lynch for the majority of the tie, on top of the injured Kyle Hayes, Seamus Flanagan, Peter Casey and Barry Murphy.

It was an opening half in which Waterford had the aid of the strong breeze. Limerick didn't hit the front until the final score of the half after the sides had been level on four occasions.

It was Aaron Gillane that had Limerick off the mark in the sixth minute with a free after he was fouled. By half time, the Patrickswell man had four points from play and three from frees.

His club-mate Cian Lynch was forced off injured on eight minutes but his replacement Cathal O'Neill pointed with his first touch and soon the game was level 0-3 each and 11-minutes played.

Limerick did have a nervy moment in defence when Michael Kiely went close to a seventh minute goal.

The Decies did build on the early momentum though and were five points clear by the mid-point of the half - 0-8 to 0-3.

Just like in Pairc Ui Chaoimh a one earlier, Diarmaid Byrnes was central to settling Limerick with long range scores from frees and one from play.

With a couple of referring decision irking Limerick, Waterford were back four points clear and 10-minutes to half time.

Limerick then jumped to life and outscored their opponents 8-3 in the remainder of the half.

Gillane, O'Neill and Gearoid Hegarty points tied up proceedings at 0-11 each.

Austin Gleeson hit back but then came the final three points of the half for Limerick - Gillane with two crackers from play.

So a one point lead at the break for Limerick after a half in which the side in blue and white had five wides and Limerick just two.

Five minutes into the second half it was six successive points for Limerick - three either side of half time.

Dessie Hutchinson then sprung to life to ignite his side.

The sides were level on a number of occasions before Patrick Curran fired Waterford 0-20 to 0-19 ahead on the 13th minute of the half.

When David Reidy and Tom Morrissey pointed, Limerick were back in control and 0-23 to 0-21 ahead and 20-minutes gone in the half.

Darragh O'Donovan had a quick-fire double to help Limerick seven clear with the stopwatch just inside the final 10-minutes.

All was then turned on it's head with two Waterford goal inside two minutes. Stephen Bennett with the first from a free and then Jack Prendergast to lave one point between the teams and five minutes to play.

Sub Pat Ryan settled nerves with a fine point and then a Byrnes free left Waterford needing an injury time goal. They went in search of another green flag but on his 50th championship appearance it was Nickie Quaid that emerged with the sliothar to secure victory.