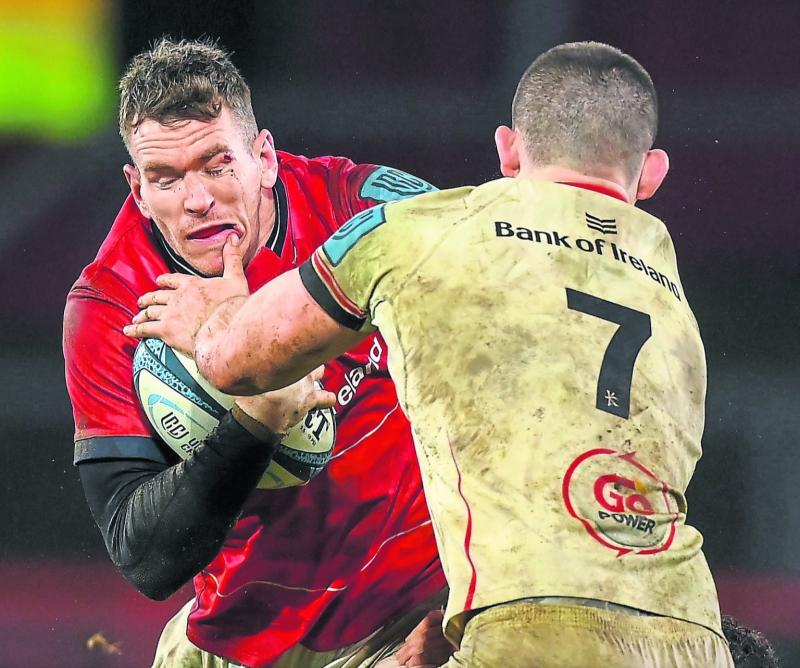 Munster centre Chris Farrell is tackled by Nick Timoney, of Ulster, during their URC fixture at Thomond Park this season

MUNSTER Rugby switch their focus back to the United Rugby Championship this Friday night when facing interprovincial rivals Ulster in a crucial regular season fixture at Kingspan Stadium.

Both sides face into the game on the back of a six-day turnaround having experienced contrasting fortunes in their last 16 Heineken Champions Cup fixtures last Saturday.

Munster succeeded in seeing off Exeter Chiefs 34-23 on aggregate to secure their passage into the quarter-finals and a last eight meeting with Toulouse at the Aviva Stadium next month.

Toulouse's passage to the quarter-finals had been at the expense of Ulster by a single point margin on aggregate, 50-49.
Friday night's URC game between the provincial rivals is a key fixture in determining finishing positions in the table and with it home advantage in the play-offs.

Following Friday night's game in Belfast, Munster Rugby complete their programme of regular season fixtures in the URC with a home fixture against the Cardiff Blues at Musgrave Park on Friday, April 29 followed by an away date against Leinster at the Aviva Stadium on Saturday, May 21, 7.15pm.

Meanwhile, Munster out-half Joey Carbery, who turned in an impressive display in the side's Heineken Champions Cup last 16 win over Exeter Chiefs on Saturday, is hoping that side can push on after securing their place at the last eight stage of the competition for a 19th time in all.

Asked how significant a win Saturday's one was over Exeter, Carbery said: “I think it was huge, that last two weeks (defeat to Leinster and Exeter in first leg) have been disappointing, and it's good to get back and put a proper performance down.

“It's a good indicator of where we should be nearly every week. If we can keep building on that and getting better we'll be in a good place.

“The keeps us alive in Europe. We move on to the quarters now and I think it puts a foot down of where we can get to. It is good belief for us as a squad to know that when we show up on the day we can go out and put our foot forward. We all know we can do it and we just need to go out and show it like we did today.

“I think every day that we go out there, we want to put what the jersey stands for in a better place. We're only players, 15 guys going out there, and the history of this club is way bigger than us and we want to keep improving on that, so it's an incredible team to be a part of and an incredible place to come out and play, from how the supporters sound, how they treat you, it's an incredibly special place.”

Carbery praised the role the crowd played in the weekend win over Exeter.

“They definitely spur us on hugely and the tough times and when we are defending on our own line and you hear the crowd coming on, it gives you a little bit extra energy, so they play a huge part for us and we never, ever take for granted their support.”