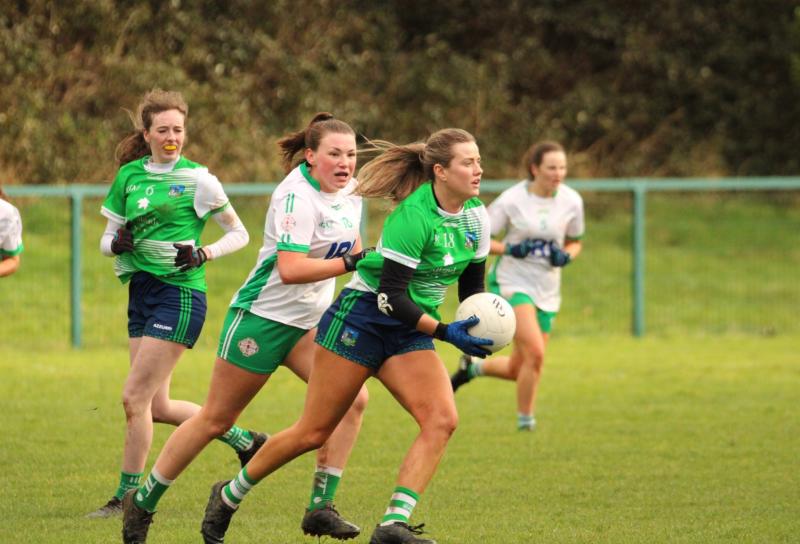 Rebecca Delee carries the ball forward for Limerick during the win over London. PIC: Sinead Kiely

TWO second half goal propelled Limerick to victory over London in round one of the Lidl Ladies Football League this Sunday.

It was victory in his first competitive game as Limerick manager for Graham Shine.

Limerick entertain Offaly in round two next Sunday.

This round one game was level at 0-5 each at half time but second half goals from Mairead Kavanagh and Catriona Davis sealed the win for the home side in a game that was played in driving wind and rain at the Martinstown venue.

By the first half water break London cut the lead to a single point.

Katie Heelan and Davis (free) edged Limerick ahead again but Aisleen Cunningham frees and scores from Renee Murphy and former Cork All-Ireland winner Beatrice Murphy ensured the game was level for the first time at half time.

Five minutes into the second half came the first Limerick goal. Mairead Kavanagh gathered possession in front of goals when a Davis '45 dropped short and the St Ailbes player made no mistake to find the net for a 1-5 to 0-6 lead.

London again rallied but Kavanagh and Iris Kennelly points moved Limerick a goal clear for the first time since the opening minutes.

There was to be just one score in the final quarter as Limerick began their campaign on a winning note.