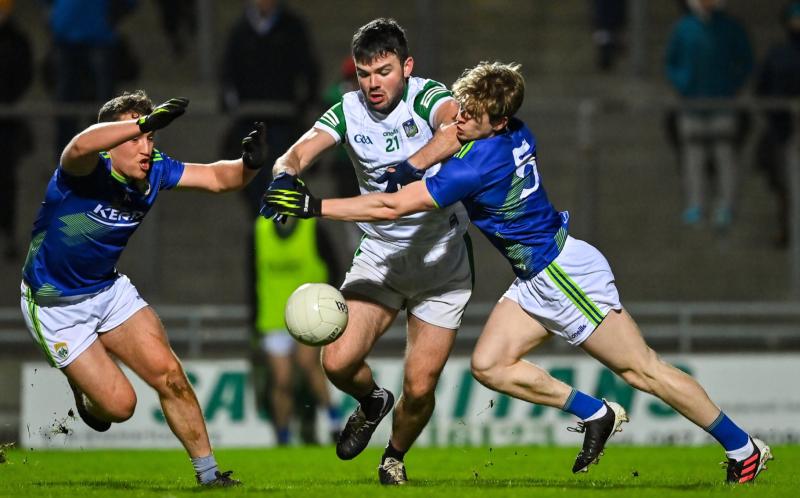 Rory O’Brien of Limerick is tackled by Dara Moynihan, left, and Pa Warren, of Kerry, during the McGrath Cup fixture at Austin Stack Park, Tralee on Wednesday night

AN EXPERIMENTAL Limerick side suffered a 23-point defeat in their McGrath Cup opener at Austin Stack Park, Tralee on Wednesday evening in what was Jack O’Connor’s first game in charge in his return as Kerry manager.

By half-time, Billy Lee’s Limerick side - the current McGrath Cup champions – were 16 points down against a very strong Kingdom side.

In truth, this Group B Round 1 game was done and dusted after just five minutes when Paudie Clifford found the back of the net to put Kerry five points ahead.

By the 11th minute, the younger of the two Clifford brothers, David, tapped home from close range to make it 2-3 to 0-1 in favour of Kerry. Limerick had responded with their opening point from Cillian Fahy.

Additional first half points by Paul Geaney, Stephen O’Brien, Paudie Clifford, Pa Warren, David Clifford and Pa Warren had Kerry leading 2-13 to 0-3 at the break. Fahy had slotted over his second of the evening to give the travelling Limerick support something to shout about.

Both sides emptied their benches in the second half, but Limerick could only manage three further scores – a free from Robbie Bourke, a Dara Noonan point, and a Peter Nash point from play with three minutes remaining – as Kerry opened the gap to 23 points.

Next up for Billy’s Lee charges is a home tie against Tipperary in Mick Neville Park in Rathkeale this Sunday, January 9 at 2pm.

Limerick open their Division 3 Allianz League campaign against Longford in the TUS Gaelic Grounds on January 29.