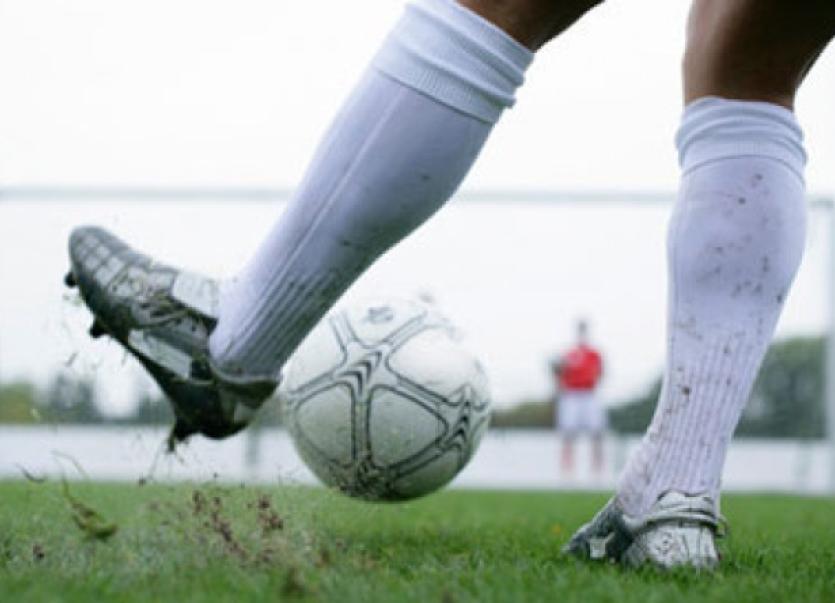 THE Limerick Desmond Schoolboy League’s gallant bid for a first Kennedy Cup success ended in a heart-breaking penalty shoot-out defeat in their semi-final clash with the Kerry League at UL Bowl this Thursday.

THE Limerick Desmond Schoolboy League’s gallant bid for a first Kennedy Cup success ended in a heart-breaking penalty shoot-out defeat in their semi-final clash with the Kerry League at UL Bowl this Thursday.

The Kerry side scored a nail-biting 11-10 penalty shoot out victory after the sides had finished level, 1-1, at the end of normal time.

After a forgettable opening period, played out before a large attendance at the UL Bowl, the semi-final clash sprung to life in the third quarter.

The Kerry side went ahead 10 minutes into the second half when Paddy O’Rourke and Darragh Lyne created the opening for Patrick D’Arcy of Killarney Celtic to grab the game’s opening goal.

However, a resilient Desmond League side drew level within two minutes when lively striker Michael Conlon, of Creeves Celtic, showed admirable composure to finish superbly inside the penalty area.

Desmond, appearing in their first ever Kennedy Cup semi-final, looked well placed to win the game in normal time when the Kerry League’s ‘keeper was sent off for a challenge on Conlon as he raced through.

The Desmond side was desperately unlucky not to grab a winner in normal time with a superb free-kick from Bryan Nix came crashing back off the crossbar, while Tadg McEvoy headed inches wide from a corner.

The Kerry side held on to force a penalty shoot and managed to edge it, scoring 11 of their 14 penalties taken, compared to the Desmond side’s 10 successful spot kicks.

The Desmond League will face the NDSL in the third and fourth place play-off at UL this Friday at 11.45am.

The four-in-a-row chasing DDSL will face the Kerry League in the Kennedy Cup final on the UL Bowl at 2pm this Friday.

Meanwhile, the Limerick District Schoolboy League (LDSL) side claimed a 13th place finish at the Kennedy Cup when edging North Tipperary 5-4 on penalties in their play-off clash at UL this Thursday evening. The sides were level 1-1 at half-time, with Tony Moumbana, of Pike Rovers, scoring for the local side. The LDSL took a 2-1 lead in the second half when Corbally’s Colin Browne prodded the ball home after a corner, However, North Tipp set the tie to penalties when equalising late on.

The LDSL, who were edged out of a place in the knock-out stages of the Kennedy Cup by finalists, the Kerry League, won the penalty shoot-out 5-4 with Shadrach Ogie, of Pike Rovers, netting the winning penalty.

Limerick District had defeated the Clare League 4-1 in their play-off game earlier on Thursday.