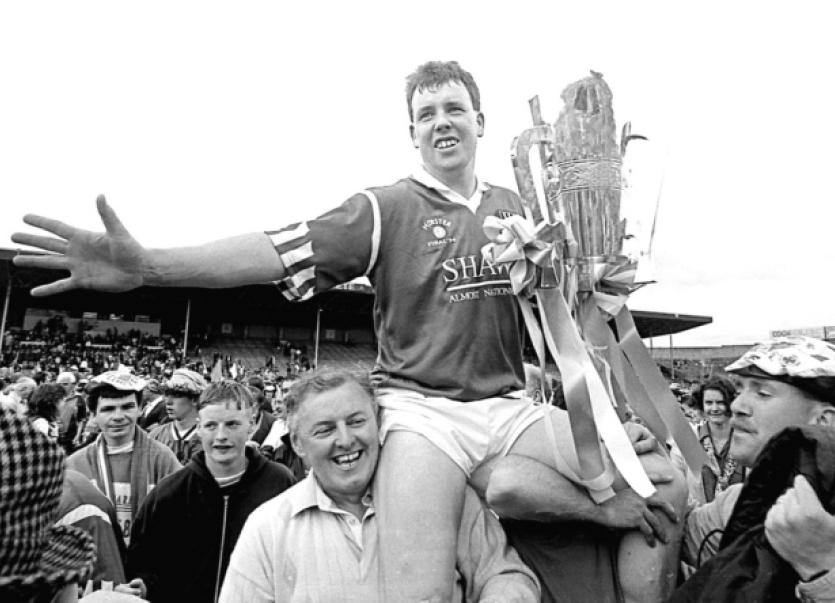 TWENTY years ago this week the Limerick hurlers ended their wait for a first Munster title in 13 years.

TWENTY years ago this week the Limerick hurlers ended their wait for a first Munster title in 13 years.

Thirteen years of a Munster championship famine ended and up the steps he went to lift the Munster SHC trophy in Semple Stadium.

“Last year in the Gaelic Grounds brought it all back for me,” recalled the Patrickswell man this week.

“I remember standing up there to get the cup and just looking down at the Limerick colour on the field - they are great memories,” he recalled of the Munster final of July 10, 1994.

“Lifting that cup and running out onto Croke Park for the All Ireland in ‘94 are two of the memories that I will always have. They were great days.”

Munster Cup in hand, Kirby was then carried shoulder high through the thousands of Limerick fans on the Semple Stadium field.

“I think you turn into a 10 year old all over again with the excitement. The supporters were unreal. In fairness it had been 13 years since we had won one - for a hurling county we just don’t win enough but still the supporters are just great,” outlined the four time All Star.

So what made the difference in ‘94?

But much is traced back to the opening round win over Cork in the Gaelic Grounds.

It was a rain-soaked day when the Ennis Road venue was umbrella covered.

Cork raced into a 2-4 to 0-2 and memories of the previous year came flooding back for Limerick.

Just twelve months earlier a side that had won the National Hurling League and reached the Munster final of ‘92 had gone to Ennis to play Clare. But there was a shock in store and Clare emerged 3-16 to 3-12 winners.

Within minutes of the start of the ‘94 championship, hopes were already fading after a blistering start from The Rebels.

Kirby stood over a 21-metre free but his effort was saved for a ‘65. Mike Houlihan delivered into the goalmouth a Kirby doubled on the delivery to flash to the net.

“It all started against Cork in the Gaelic Grounds - a fine wet day,” recalled Houlihan.

“I think winning your first round is so important and it can gel a team together and is great for moral. That was a start of an era for a lot of players. Some would have started in ‘92 when we got to the final below in Pairc Ui Chaoimh and we had won the league that year too - there were plenty coming through from the minors in ‘84 and the U-21s in ‘87 and then a few more came on board. Those players had won at underage and more had Munster club titles - we had beaten Cork clubs in ‘92 and ‘94 and when you start to believe you can beat them,” outlined the Kilmallock man.

Along with Kirby and Houlihan, Ciaran Carey, Ger Hegarty, Joe O’Connor and Mike Galligan were other survivors from the ‘92 Munster final team to that which took the field in the decider two years later.

“We had new management and the team just seemed to click and gelled with the wins,” recalled Mike Galligan.

“Of course we got to the Munster final in ‘92 and they gave us a bit of a trimming. Then in the first round in ‘93 it was Clare and there were no backdoors in those days,” said the Claughaun half forward.

Tom Ryan came into the scene on the back of Ballybrown club success and was joined by selectors Liam Lenihan (Tournafulla) and Rory Kiely (Feenagh-Kilmeedy) as well as physical trainer Dave Mahedy.

In that round one game debuts were handed out to Damien Quigley, Steve McDonogh, John O’Neill and Joe Quaid, while the likes of Ger Galvin, John Roche and Mick Wallace were other new faces on the scene.

All that confidence was necessary to battle back to victory in the opening round clash.

Within minutes of Kirby crashing the ball to the net, Limerick added further goals from Pat Heffernan.

Houlihan can still remember the value of the win.

“Beating Cork in the first round was a big thing for moral. When you win the first round it sets out your stall for the year. Cork had been in the All Ireland final of 1992 and still had the likes of Ger Cunningham, Seanie O’Gorman, Jim Cashman all in their team with several All Ireland medals,” recalled the midfielder.

“You need a bit of luck to get over the first round. I think if you look back at the last 15 years our record would be deplorable. The win this year must be the first time since the ‘90’s that we have won first rounds back-to-back,” explained Houlihan.

Limerick progressed to win that Cork game, 4-11 to 3-10 with Heffernan getting a memorable second half goal when he delightfully flicked to the net after a Carey delivery.

That brought Limerick to a Munster semi-final against Waterford and after a tight battle Tom Ryan had guided his side to a Munster final on a 2-14 to 2-12. Although without a Munster title since 1981, Limerick were a coming team and it was no surprise to see them back in the decider, according to Houlihan.

“Remember that club hurling in Limerick was strong with The Well, Ballybrown and ourselves. Just look at now and Na Piarsaigh have won two of the last three and again Limerick are strong at inter-county level. The minor and U-21s had won and it’s the same now, players have Harty Cup medals and are winning underage so they want to achieve more.”

And achieve more they did.

“They were good times - although we did lose the All Ireland finals,” sighed Kirby.

But back to the Munster final!

“A good day..... great times. It was one of them days. I’d say myself Mike (Galligan) and Frankie (Carroll) must have hit 16/17 points from the half forward line. We just went into the field with momentum and that was key,” said Kirby.

“There are days when you hit the ball and it just goes over the bar.”

Of course there was no shortage of motivation heading to Thurles for the final with the championship encounter of 12-months previous still raw.

“That was a huge setback to lose in Ennis - we thought we were going well and had a chance after being in the Munster final and winning the league in ‘92. Out in Ennis Mike Houlihan was sent off and we just never rallied,” Kirby explained.

Fired up by those memories Limerick set the early pace in the ‘94 decider and were 0-5 to 0-2 ahead in the early stages. But back came the Len Gaynor managed Clare and a Stephen Sheedy point levelled at 0-6 each. A huge long range effort from Frankie Carroll helped Limerick to the interval lead. In front of 43,368 Limerick stormed to victory - 0-25 to 2-10.

Man of the Match was Mike Galligan with a remarkable seven points from play.

“Clare had been to the Munster final in 1993 against Tipperary but things just seemed to go right for us. After half time we got a flow of points and that put Clare away,” he recalled.

“To play well in a Munster final is great - in ‘92 didn’t go too well for me but in ‘94 the ball broke my way and its always nice to look back on that. I was working in Clare so I had seen both sides of it after wins and losses. The first Munster medal is always special.”

But Galligan has a fondness for the championship win of two years later.

“96 I will never forget - we beat Cork down in Cork, then we got back at Clare for ‘95 and of course there was a replay against Tipp in the final,” he recalled.

The Clare-Limerick rivalry of the period made it all the sweeter for Houlihan.

“They had ‘93 and then we did ‘94 and it was the opposite in ‘95 and then us again - it was in swings but of course they won the All Irelands and we didn’t. It’s very hard to be beaten any year so it does give you a bit extra the next time you meet,” he explained.

But ‘94 was the start of a number of big years.

“It was a good era for Limerick hurling. The Munster championship is so special but it takes everything to win it. The smallest effect can make the difference. That day we were hitting scores from all angles - Clare never really got off the bracket that day,” said Houlihan.

In the end Limerick ran out nine point winners.

“I remember at the start of the year Tom Ryan asking me to be captain after Patrickswell had won the county championship. I didn’t really expect much after ‘93 but what an honour to captain you county and to win,” said Kirby.