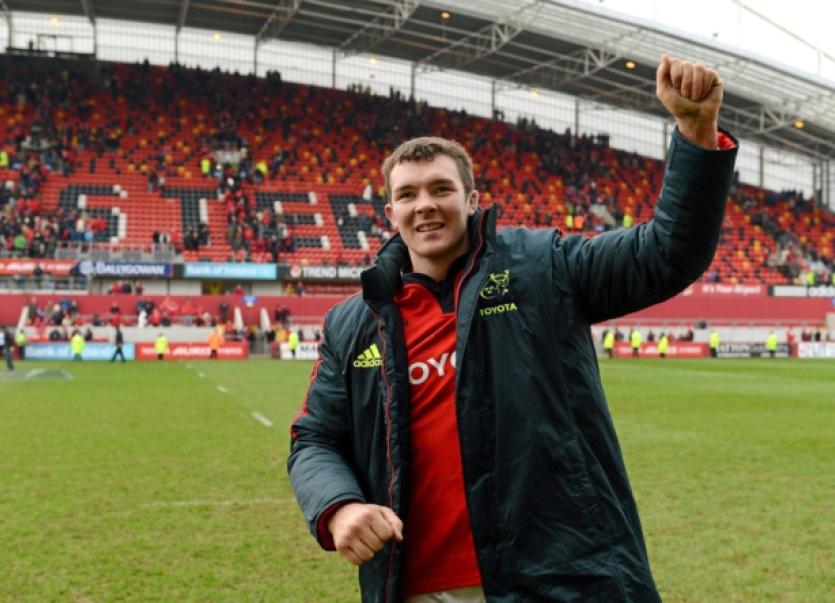 PETER O’Mahony has been announced as the new Munster captain for the 2013-2014 season.

PETER O’Mahony has been announced as the new Munster captain for the 2013-2014 season.

Following on from his recent captaincy of the Ireland touring squad to North America, the 23-year-old has been selected to captain Munster for the upcoming season.

Taking over from Doug Howlett who retired in June, O’Mahony is no stranger to the role and previously captained Munster during the 2011/12 season in Paul O’Connell’s absence, and in doing so claimed the Munster Rugby Young Player of the Year award.

O’Mahony also captained Munster A to the inaugural British and Irish Cup Final in 2010 and has previously captained Ireland U-20s and U-18s.

With 46 Munster caps to his name O’Mahony made his league debut in January 2010 as a replacement against Ulster. He then put in a Man of the Match performance on his Heineken Cup debut against Northampton Saints in November 2011 and scored his first Munster try a week later against Castres Olympique. He has represented Ireland on 16 occasions and was seen as unlucky to miss out on the Lions tour this summer.

“It is the biggest honour of my career so far and it is very special to me,” said O’Mahony today. “When I was asked by Rob initially I was just shocked and my first instinct was to jump at it, but I had time to go away and think about it and I wanted to talk to people to get their thoughts.

“Fellas like Paulie are very important guys in this squad and hopefully he and the other guys will be behind me for the year and I’m really looking forward to it. I’m not going to try and fill Paulie’s boots, Axel’s boots or Dougie’s, I’m going to try and be my own captain, look after the lads and figure out the way I’m going to do things.”

“Peter is a naturally gifted leader,” said Munster head coach Rob Penney, “and is still very young but has a lot of the attributes that are special and intrinsic to Munster. He will grow in to being a special leader of this group of men. I have spoken to players including Paul O’Connell who was extremely supportive of Pete’s appointment.

“We went through a process last year to appoint Dougie via the players and this year Peter’s name was to the forefront of that list so taking all that information on board it was a no brainer that Pete would be appointed.”