Out in the Open: A heartless Limerickman - by Dan Paddy Andy 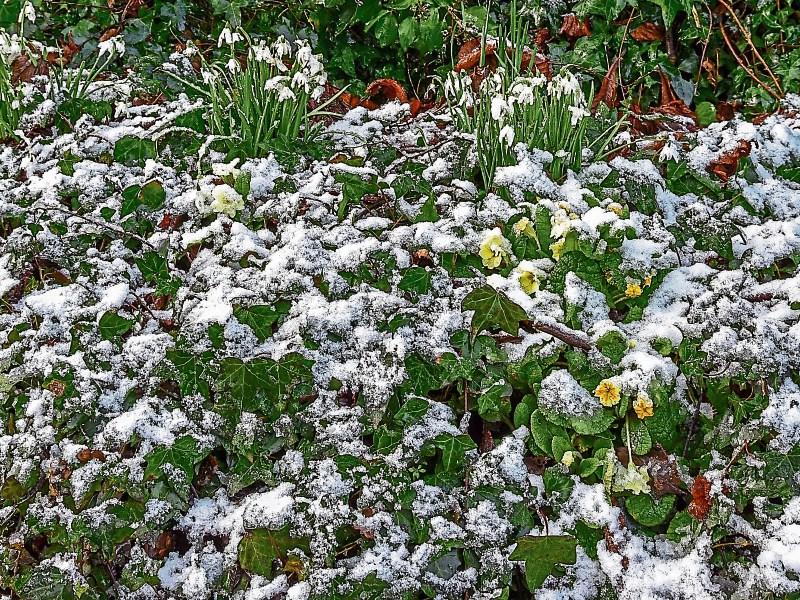 PICTURE THIS: Snowdrops and primroses pictured by Denis Hickey after a light snow

BACK this week to the great matchmaker. No picture of Dan Paddy Andy would be complete without a glimpse or two at his early life. His schooling was scanty, although in later years he was to develop into an outstanding scholar, fully acquainted with the history of the Stacks Mountains and with a thorough understanding of the people who dwelt there.

In Dan’s boyhood there were only two kinds of scholars, the very good and the rest. The very good were those who topped their classes and went on to be teachers, civil servants, postment and road stewards. Few, if any, of those major professions emerge from this countryside in Dan’s youth.

In those days a scholar might remain on the National School if he so wished until the age of sixteen. However, if he failed to secure a county council or government job after this period he was regarded with a good deal of suspicion by local employers, the vast majority of whom were farmers. The suspicion arose from two factors. Firstly, it was regarded as a fait accompli that youth who spent so much time in the classroom was rarely fitted for manual work on a farm. Secondly, it was also widely accepted that an educated labourer was fonder of agitating than working.

On the other hand dunces and fools made excellent drudges. They never questioned because they didn’t know how to question. All that concerned them was a bed, smoke, a woman and three square meals a day.

The educated workers sought more such as annual holidays, an unheard of luxury in Dan’s boyhood. Consequently nobody wanted them. They boarded the emigrant ship and took their dignity and their education with them. All did well in the countries of their adoption, American, Australia, Canada and England. English, was the spoken language of the aforementioned places and in a period when emigration was a way of life, a man with fluent English, who could read and write had a head start over other exiles who had no English at all.

Dan Paddy Andy fell somewhere between the two stools. His sight which always troubled him turned him into a slow learner, a bad reader and a poor writer. As a result he had no problems getting work from a farmer. He was a well built fellow, destined in time to take over his father’s farm but for the present there were too many mouths to feed and it was decided he should go to work elsewhere.

When word went out that he was available a stout man in a horse trap arrived on Sunday afternoon and explained that the boy who normally worked for him had disappeared without trace. The farmer, whose name we shall designate to be Paddy O’Leary, came from East Limerick where he kept fifty milch cows on a hundred acres of prime land. The time of the year was mid-July and it transpired that Mr O’Leary hadn’t a sop of hay saved and also his corn corps would be ripe in the near future. He require the services of Dan until the end of November.

A bargain was struck after Dan’s father and mother exacted certain conditions. The farmer was agreeable. At four o’clock when the July sun was high in the sky Dan left home for the first time. They arrived at the farm house after a journey of six hours. Straightaway with the help of Mrs O’Leary and an old crone they turned into the cows. Dan explained to O’Leary that he hadn’t eater since the non of the day.

“Listen,” said O’Leary “and I’ll give you sound advice.”

“What would that be,” Dan asked.

“It’s a foolish youth,” said O’Leary, “that puts food in an empty stomach.”

Dan was somewhat puzzled by this and the following day just before dinner time he told O’Leary that he had no intention of starving to death.

“You may be sure,” said O’Leary, “that the grub here will put a blossom and a shine on you so that your father and mother will be wondering who the fine stranger is when you return home in November.”

The day in question was a Friday, a day of fast and abstinence.”

“If I was at home in Ronagown,” said Dan, “I’d be facing for my fine fried mackerel or a pair of herrings and if there was no fish there would be the finest onion dip with new spuds and butter and a panny of new milk to wash the whole lot down. If what I’ve recounted wasn’t on the menu, there would be three or four fried eggs and spuds galore.”

In the kitchen of the farmhouse there were two tables, the main one for the farmer and his wife and the two young children, the other, a smaller, rickety one for Dan and the old crone.

“She was so ould,” said Dan, “that she forgot where she came from. She worked for her keep and the occasional half quarter of tobacco. She spared her pension money for to cover the costs of her funeral which wasn’t long at all after them. May the good God grant the creature a silver bed in heaven.”

When Dan and the old woman sat down for the mid-day meal the farmers wife went up into the room and returned with a five foot high screen which she placed between her own table and that of the servants. This was so Dan and the crone could not see what was on the main table and to discourage any high-falutin notions with regard to food.

Finally, after she served her husband with his meal, she attended to the wants of Dan and the old woman. She placed a plate on the table with several old spuds on it, explaining that the new ones weren’t fit to be dug just yet. This was a lie because Dan had seen O’Leary pulling stalks earlier in the morning. After the spuds came a small jug of skimmed milk, and one lone middling sized white hen egg.

At home in Renagown no one would eat a whit hen egg. Eggs had to be speckled or brown or even off-white. White hen eggs were given to calves and greyhounds but never to humans. There was the same lack of meas in white calves. Bawnies they were call and it was believed that they were inferior to coloured cattle. On the other hand there was no objection to white women, according to Dan.

“Blasht me,” said Dan, “but there was fierce demand for white skin on women and little or no demand for yellow or brown and what matter but one was no better than the other inside in the bed or out of it”

“Is there any more eggs coming up missus?” Dan enquired of the farmers wife.

“Wisha what do ye want more for,” said she, “haven’t ye a heap of spuds and plenty of milk. Divide the egg not like a good boy and ‘twill keep ye going handsome ‘til the supper.”

On some week days and on Sundays there would be meat, either fresh or salted, but there was never enough of it and it was always fat. There was only one vegetable and that was kale.

“I was coming to believe,” said Dan, “that there was no more lean meat left in the world so I put it to the farmer that I would have to get a fair entitlement of lean meat. However, he gave me such an account of the effects it had on the human stomach that I wasn’t sure whether fat or lean was better.”

“Many’s the time my thoughts went back to my mothers fiahool table in Renagown. Any man passing the road might turn in and be sure of a hearty welcome plus the fill of his craw. Since that time I never saw the bate of O’Leary and I met many a strange fish during the course of my travels.

“The meat on his own table was always lean. The spuds were always floury and the eggs were always brown. The screen, you may be sure, was always standing between us, otherwise I wouldn’t have been responsible from by actions. I left O’Leary the end of November. I saw him once only since then and that was at Listowel Race after the war. He was eating a penny bun and I swear to you the same man could buy out half of Listowel.

“A man without a heart is no man and you may be sure that neither O’Leary nor his wife will ever die from heart attacks because they had no hearts. I left O’Leary,” Dan went on, “with welts and calluses all over me, with a stoop on my back that stayed for six months and with a loss of a stone and a half in weight. It made me appreciate the decent home of my father and mother and I never cribbed again when goodies were scarce or if there was no shillin for my picke. I must say in all fairness, that O’Leary and his wife were well matched and I couldn’t have done better myself.”

“You may be sure and certain of one thing, “Dan said sagely, “and that is this: If O’Leary’s children don’t drink his hard earned monies you may be sure that his grandchildren will because that’s the way of the world and ‘twas a wise man that said ‘after the gatherer comes the scatterer.”