Out in the Open: The man who has Sonny’s ear (and how he got it) 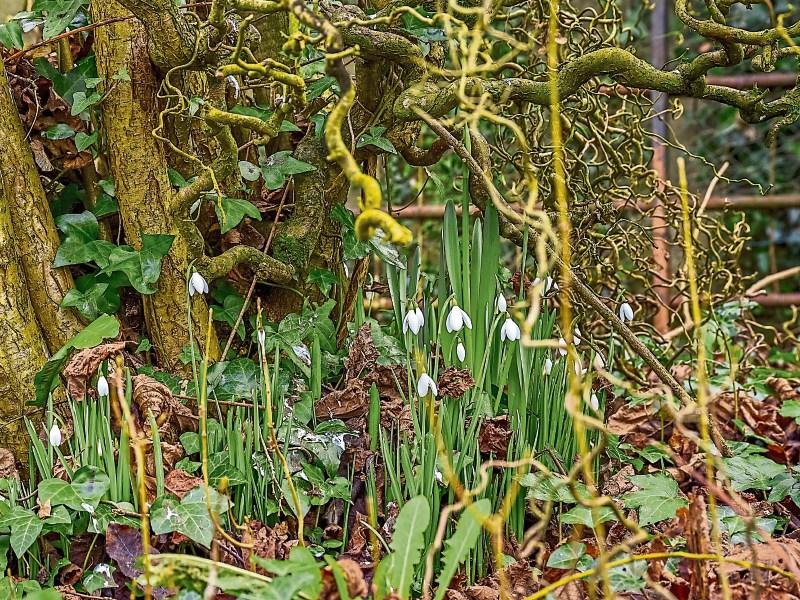 Denis Hickey snapped these snowdrops under the tree in Co Limerick

LAST WEEK I was reading an international magazine which dealt with the African State of Zaire, and with that strange genius, Bisengi-Mana, who happens to be director of President Mobutu’s Political Bureau. I confess that I only skimmed over the contents of the article. What really attracted my attention was the headline: “ The man who has Mobuta’s ear.”

It took me back over the years to a wren dance where a serious altercation took place over the division of an enamel bucket of porter, the last drainings and dregs of a half tierce which had served the party well over the night. The incident happened at three thirty in the morning.

The man whose good fortune was to be the sole distributor had apparently seen to his own needs first and had stashed away two two-pound jampots filled with the precious liquid before seeing to the needs of the others in the company.

When news of his parody went around he was immediately assaulted from all sides and but for the intervention of Sonny Canavan, who happened to be an honoured guest at the party, the man might have been maimed.

Much was tolerated at the type of wren dance. Passes were made at men’s wives, corns were stood up and couples were knocked to the ground in the heat of the dancing. Aspersions were cast and insults exchanged but none of the indiscretions I have mentioned were regarded as sufficient cause for restoration to fisticuffs.

Only the unequal apportionment of porter was considered to be sufficient grounds for assault and battery. Before the bucket carrier was struck a single blow he was first held firmly by two of the strongest men present. The bucket was then removed with a minimum movement from his grasp lest a single drop of its contents was wasted.

After that he was considered fair game for anybody who felt he had been wronged. Meanwhile an independent enquiry was taking place into the likely whereabouts of the jampots. They were quickly found and their contents quickly consumed while the affray was at its height.

In his efforts to save the life of the bucket carrier, Canavan was the target for several poorly aimed blows, which were the rightful property of the man he was defending. These, of course, had no effect on Canavan, who had been an army boxer and also a widely respected bouncer in a number of public houses in Listowel. He did not retaliate when a blow caught him accidentally.

The real trouble started when a pint- sized fiddle player, crazed from drink, found himself without the room to draw a clout at the bucket-man. He did what any aspiring all-in scrapper might do under the circumstances. He opened his mouth and fastened his teeth on the ear of his victim. Alas for him, he chose the wrong ear.

Instead of the bucket-man he fastened upon the much prized ear of Sonny Canavan. Having secured a firm hold, he held on for all he was worth.

Immediately Canavan reacted with the classic response to such an assault. He gave his assailant an elbow into the gut. The fiddle, however, was made of superior mettle. He refused to relinquish his grip.

What happened then is history. So great was the force of the elbow delivered by Canavan that our friend was thrown through the kitchen door and found himself unexpectedly astride a rick of turn which stood outside. Canavan would have followed him but he was restrained by the more sober of the revellers. When the fiddler recovered his senses, he found a strange object in his mouth. It was a portion of Sonny Canavan’s ear.

Drunk as he was the fellow appreciated the magnitude of the transgression he had perpetrated. He also appreciated the value of the trophy between his teeth.. He transferred it to his waistcoat pocket. The following morning he departed for England and some time later to America, where he took to displaying the portion of the ear in taverns and nightclubs.

So like Bisengi-Mana, who has Mobutu’s ear, this insignificant escapee from Canavan’s wrath is also possessed of Canavan’s ear. As I have said I might have forgotten the incident altogether but for reading the magazine. There are a few instances these day of ear biting. In my youth the newspapers were full of such occurrences. Nose biting was also common and many is the hand that fell for a snap in the heat of an argument. Still it was the ear that took pride of place.

Sonny Canavan’s left ear is not as whole as his right one, but it doesn’t worry him.

“There’s oftentimes,” says Sonny, “when I hear too much.”

Let us now address ourselves now to the mountain of correspondence which has piled up over the past several months.

Several letters from bachelors I have redirected to my good friend Patrick Ahern of Glensharrold, Carrickerry, and he has promised to do his best to provide wives for those who require them. There are a number of letters from Frank Mahoney of Clyduff but I’m sure Frank will forgive me if I postpone publication until the evenings get longer.

There is one letter which I feel constrained to include this week. It has to do with an article I wrote a fortnight back on the subject of capping eggs. Its author Paddy Lysaght of 3 Osmington Terrace, Limerick, himself a prize-winning essayist.

“Dear Mr Keane, I fear you’ve got your perspectives all mixed up in this egg capping business. Perhaps it’s your ego that’s at fault? I don’t know.

“On and on you wen ad infinitum almost about the correct way to de-cap an egg, when if you had studied your subject correctly, you should have know that your dissertation is now outdated due to that wonderful invention now on the American market, namely, a little machine like a miniature power saw which when plugged in and place at a horizontal position at right angles for the egg which is about to be decapitated, slices the top off cleanly, hygienically and almost instantaneously at the press of a button so automated that it is easily operated by the index finger of his right hand.”

“I grant you this ‘yoke’ might not reach the Irish market for some time, but that is not the point. Anyone essaying to write on such a serious subject as egg decapitation should be thoroughly ‘aut fait’ with his subject; he should be in possession of up-to-date-minute information. Otherwise, like Humpty Dumpty he is liable to have a great fall when such lacunae in his knowledge are brought to his notice.

“But the foregoing is only incidental to the point of my letter. Surely, J.B. you must be aware, considering the thought and study you have given this august subject that the important point of egg decapitation is not the physical thing but (and you only mentioned this almost in passing and at the tail of your thesis) the conscious choice of the end to be de-capped. One who would think of decapping the egg at the narrow end or even contemplating doing so, does not deserved to be called a human being. It is simply not done.

“Our own Dean Swift, you may recall (but then it is becoming clear to me that your knowledge of this profound subject is superficial in the extreme) has written somewhere of a war being fought between two nations on this point. Which is the correct end to decapitate an egg ?”

“Of course these nations were not as silly as we might think. Wars have been waged for much sillier reasons.

“And now my dear J.B. now that I have had my say, I feel much better thank you. Actually I feel elated, just as a hen must, after much clock-clocking finally gives birth to an egg. Sincerely, Paddy Lysaght.”

As usual Mr Lysaght has something of relevance to say. Egg decapitation is a tricky business as indeed is egg boiling as many a house wife knows to her cost. There are some women, excellent in every respect, who cannot and will not boil eggs, according to instructions. The eggs are either too hard, or too soft and I have been witness to several serious rows as a result.

Seated in the bar nursing a gin and tonic was an American lady, who awaited a train to Dublin. Her husband, long since deceased, had been a drunkard and an idler all his life and never amounted to anything until after his death. Upon his demise she had his body cremated and with the ashes she succeeded in making an egg timer.

This article by the late and great John B Keane first appeared in the Limerick Leader on February 12, 1977.