Out in the Open: Violence in North Kerry 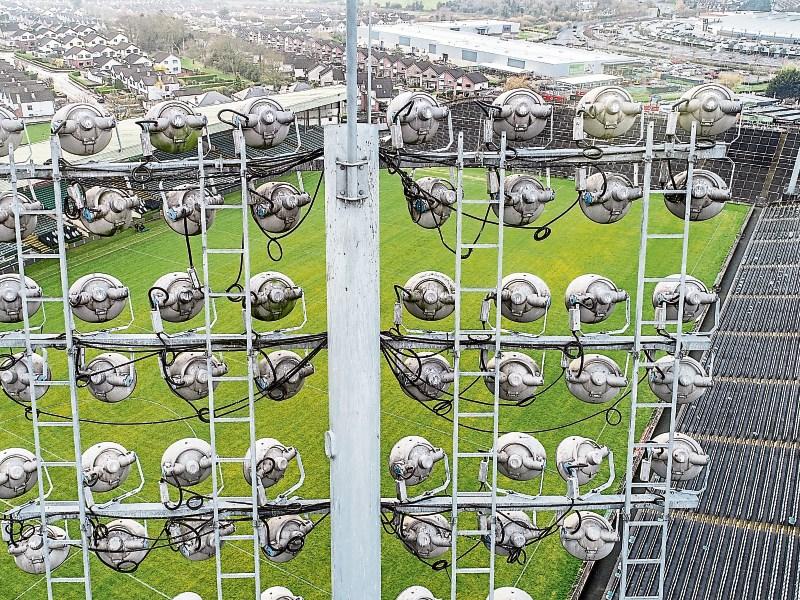 Bird’s eye view: With the aid of a drone Tom Russell got this shot high above the LIT Gaelic Grounds

AS MOST readers know by now, violence erupted in many towns and villages in North Kerry during the recent August weekend.

At the time, I decided to sing dumb on the matter as most reports were distorted and many downright mischievous.

The best thing to do, I felt, was wait and see so that a reasonably accurate account might be assembled. The facts are that at least three Ballybunion publicans were seriously assaulted and in at least two pubs there was considerable violence with glasses flying and other weapons much in evidence.

In Ballyheigue there was also a good deal of skirmishing with one serious incident during which a young man lost an eye. In Tralee, one public house resembled a battlefield, with glasses and ashtrays, to mention but a few of the missiles involved, whizzing indiscriminately through the air.

The chief culprits were teenage girls and one witness described many of the these as being rotten drunk and totally insane.

I came across some young ladies in a similar condition in the main street of Ballybunion.

They were so alcoholically berserk that cars could not pass while they disgraced themselves on the roadway. Any attempts to remonstrate was greeted with a threat of violence.

In the town of Dingle, which has been mercifully free from violence and thuggery until now, many publicans closed their doors.

One publican told me that he was almost overpowered by the smell emanating from the young men's bodies.

There was disorder in some pubs, and there was unhealthy incidents in the streets.

There was also some trouble in Listowel, but in comparison to Ballybunion, it could be described as negligible.

The foregoing then is a brief resume of what happened across the August weekend. It has, of course, been threatening for some time, ever since a certain pub in Ballybunion opened its doors some years ago to boys and girls of all ages.

Even after August and Whit weekends, it became the mecca of every drop-out and misfit in the country.

This was when it began, but one may well ask why in God's name is it allowed to continue?

As one who loves Ballybunion more than I do any resort in Ireland, I think it is a shame and disgrace that this loveliest of all family resorts is held up to ransom annually by a shower of dirty, unkempt, malodorous, urchins.

There may be people reading this who are likely to become incensed before I'm finished, but if they do, my observations will have served their purpose.

It is now obvious that most of the backgrounds came from certain areas of Limerick and Cork, with all due apologies to the decent, hard-working people of these two fine cities.

They came without means of support, and they came for no other purpose than to cause trouble.

Before I go on, let me recite an experience which happened to myself. On the Friday night of August weekend, I was sitting in my own premises when three youths entered. They called for three pints of Smithwicks. The barmaid refused on the grounds that one was underage.

He looked about fourteen or at the most fifteen.

The leader of the party roundly abused the barmaid, but they left quickly when myself and a friend advised them to do so.

Later that night when the pubs were clearing, I saw the same trio who had been earlier expelled from my own premises coming up the street.

The under-age member of the group was drunk.

It was quite apparent that he was served in some pub in the town.

On the same night, I noticed several other youngsters who I knew to be underage.

They were also alcoholically under the weather.

They had also been served by publicans in town who must have jnown or guessed their ages.

I regret to say that the same situation applies in certain pubs not only in Listowel but also in Ballybunion, Ballyheigue and Tralee.

I concede that the majority of publicans make an honest effort to discourage under-age drinkers.

Certain others do not.

I can go on oath to say that on last August weekend I saw at least fifty teenagers who could have been no more than sixteen under the influence of drink and worse, still a menace to society.

They did not purchase the drinks in supermarkets.

They were knowingly served in public houses by unscrupulous publicans who should be thoroughly ashamed of themselves.

Most publicans who read this will agree with me.

It is by no means an easy job to determine the age of certain youngsters, and I fully accept that many mistakes are made, but to give the benefit of the doubt to youngsters is to gamble with the future of another man's children.

Let me assure readers, whether they are publicans or parents, the publicans who serve drink to under-age customers are in a minority.

They are also the bane of other publicans who too often are tarred with the same brush.

But what does a publican do when he is requested to serve intoxicating drink to youngsters who might be described as borderline cases, for instance, to a young fellow who may look seventeen but who, is in reality, is nineteen?

The answer is, of course, do not serve him unless some form of identification is available.

You will be subject to to abuse, maybe even assault, if they think they will get away with it.

On the credit side, however, word will soon spread that you are running a no-messing establishment and very soon you won't be troubled by borderline cases except on very isolated occasions indeed.

Until this year eruptions of teenage violence during big summer weekends was the fault of drunken and half-drunken teenage boys, but of late there is a dimension.

During the disturbances in the Tralee pub on August Sunday night, most of the violence was engineered by teenage girls.

They simply could not be restrained, and any attempt to mollify them could lead to a glass in the face.

The obvious solution for publicans who are likely to be faced with violence is to close doors in the face of a teenage takeover.

If the door is manned by an astute and mature person, business may proceed as usual.

Whatever way one looks at the problem, the time has come for positive action if the situation is not to grow out of all proportion with the inevitable killing just around the corner.

Louis Heaphy, the genial Ballylongford process-server, has resigned his position in favour of a regular job.

He served all together in excess of five thousand summonses, and not one person said as much as boo to him during the course of his deliveries.

He will be missed by all those who frequently break the law and by those who incur debts which they have no hope of paying.

A woman from Brosna once told me that she would think nothing of going in debt if it meant getting a summons from Louis Heaphy.

What saved Louis time and again was his infectious smile.

According to himself, the biggest tricksters of all were those who looked the least like trickers. For instance, he delivered more summonses to so-called respectable people than he did to those who are held in low esteem.

"I once gave a sheaf of civil bills," Louis told me, "to a man you'd think butter wouldn't melt in his mouth. I thought he would be the last man in the world to incur debts, with his lovely suit of clothes and two big gold teeth in the butt of his jaw that would buy a farm of land for you. He was owed thousands, but 'twas the same as if he didn't owe a halfpenny. I declare to God, but you'd give him your money to mind."

So much for Louis Heaphy, the man who took the sting our of summonses. We wish him well in his new position. And fondly hope that he'll never be at the wrong end of a civil bill or a summons.

Since recording the decline of sea trout in the River Feale, I have received numerous letters on the subject.

All writers lay the blame on the drift netting which is taking place along the west coast, particularly at the mouths of rivers. One writer gives a short account of why the Feale is so-called, but he is, I fear, being unduly speculative.

Literally translated, the word Feale means bountiful, although it is doubtful if this description will apply much longer due to the falling off in trout and salmon stocks.

The river assumed its name from the Lady Fial who was the wife of Lughaidh, son of Ith.

One day while Fial was bathing in the river a man observed her from the shore and so mortified was she that she died of shame.

The man in question happened to be her husband, but she was, apparently, unaware of his identity.

Exactly where the lady's death took place is not known, but it is believed that is occurred somewhere between Listowel and Abbeyfeale.

This article first appeared in The Leader on August 21, 1976.