Out in the Open: Stopped in the street... by a pillar of the Church 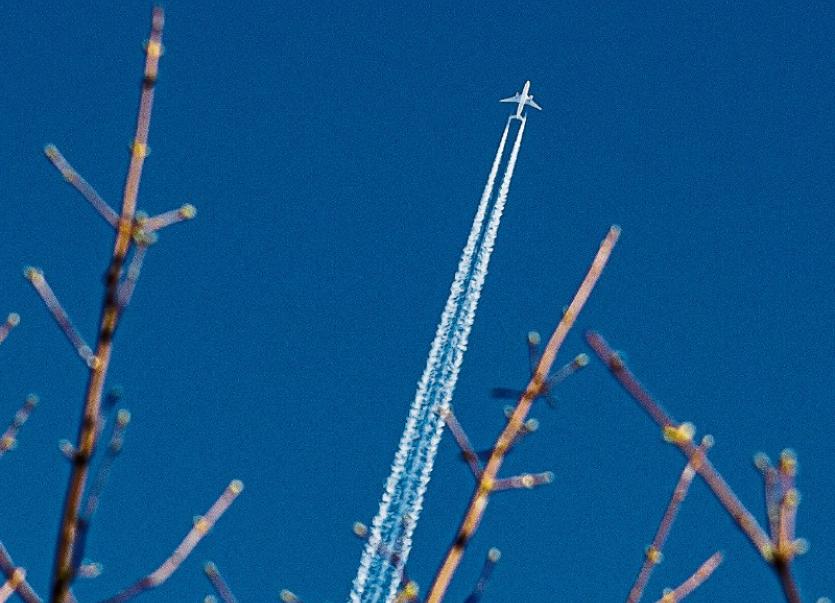 PICTURE THIS: Leaving on a jetplane: United Airlines’ B777-200, flight number 925, cruising at 36,000ft over Limerick from Heathrow to Washington DC snapped by Leah O’Carroll

LAST Saturday, in the street, I was taken to task by a lady of my acquaintance regarding my comments in these columns on the missioners who recently conducted such a successful retreat in the parish of Listowel.

She confessed that she was somewhat surprised and shocked at me, I was partly taken aback because the woman in question is a pillar of the Church and the backbone of more than one charity. I asked her what it was that had given her offence.

She quoted at length from a verbal communication entrusted to her by another woman, a mutual friend of sorts with a superficial interest in religion but possessed of an intense dedication when it comes to the destruction of other people's characters.

“Stand there,” I said, “and don't move.” I dashed indoors and located the “Limerick Leader.” Then I returned to the scene of the impeachment and asked the good lady to point out the paragraphs which had offended her.

Dutifully she read the relative sections.

“But this,” said she, “compliments the missioners.”

“That is so,” I said “ and will you now be good enough to return to your informant and request, on my behalf, an unqualified apology?”

“Why not?” I asked. She did not reply at once. Instead she nudged me and indicated a young lady who happened to be passing by.

“Did you ever see anything like that?” she said, indicating the girl's receding but unmistakably voluptuous figure.

The girl, as though she sensed she was under discussion, turned and favoured us with an impudent smile.

Her face was heavily made up under hair which was kinky and fronded.

“Isn’t that disgraceful?” said my acquaintance. To this, I made no reply, I recovered my paper and departed, more convinced than ever that most people see what they want to see and hear only what they want to hear.

While we are on the subject of religion, let us look at the likeliness who are now firmly established in the area.

Recently they mounted a sustained campaign in Listowel and district. They handed out leaflets and sold other literature at modest prices. They made house to house calls and the vast majority of people received them kindly.

It’s a great pity somebody doesn’t tell them that they have as much a chance of attracting adherents in Listowel as a snowball has in Death Valley, Calif.

One good thing about present day missions in conclusion, is that the visiting conductors are no longer quarantined by traditional segregation or by other multiple prejudices.

Now to the cuckoo, that blithe Moroccan sprite, who shall be calling upon us shortly to spend the summer here.

Every year about this time I like to say a few words about this most welcome of visitors.

What does the old song say about him:

“The cuckoo come in April

He sings his tune in May,

at the end of June he changes his tune.

And in July he fly’s away.”

Every April 18th the cuckoo arrives at a grove known as The Sallies in the townland of Offoulia, in the parish of Ballydonoghue, which divides the parishes of Listowel and Ballybunion.

This is no exaggeration. At that time in April the sallie are in full leaf and capable of providing adequate cover for the shy creature. Also other birds will have made their nest by this time and all he has to do is murder the fledgling occupants and take over.

He arrives around 7.30 in the evening and he spends the hours before darkness cuck-coooing which is the call of the cock bird of the species.

The female is who calls “cuckoo” without adornment of any kind, prefix or entitled.

Before nightfall his call amazingly, is answered and as the skies darken his mate for the summer season cuddles up to him and they spend the first of many happy nights together. It is my wont on April evenings to call upon my friend Sonny Canavan of Dirha West. Together we stroll along the bog by little known cart passages and barely discernible goat paths until night descends gently and we retrace our steps.

Without fail on the 18th day of April the cuckoo, freshly arrive from Morocco or some haunt nearby that antique lands will announce his arrival.

Even the great herd of the goats raise there heads at the first , second and third calls. There after they take no notice, too intent in their search for herbs, shoots and young green grass.

In the next few months there will be many reports about early cuckoos.

Those not familiar with the terse but musical message of these dun-coloured tourists are often inclined to confuse the chortling of ring-doves and wood pigeons with cuckoo-calls.

Consequently there will be reports of cuckoos arriving long before their time.

Great care should be exercised therefore when there are reports of premature cuckoo calls. The reliability of the reporter should be weighed against the prevailing weather conditions and verification by way of corroboration should be requested.

Then and only then can we be certain that the first cuckoo has indeed arrived.

There is a feeling of disappointment and disillusionment in Listowel now that it has been announced that the offices of North Kerry Milk Products are to be situated in Tralee.

The reason given is that the offices would be more central.

If this is so why didn’t they press for the factory there in the first place? The feeling in Listowel is that Tralee has been given the cream and that they have been fobbed off with skim.

I have heard no valid argument in favour of the removal of the office staff to Tralee unless it is that many of them have houses there already.

In fact it seems somewhat impractical to locate the offices and the factory so far apart, 17 miles to be exact.

A local businessman with a wide reputation from sound thinking assures me that it is an uneconomical move and there was no way, at any time, by virtue of vote distribution, that the offices could be sightly near the Listowel factory.

There was never any intent to have the offices in Listowel and the recent vote by the directors of the North Kerry Milk Products was a a mere exercise in hypocrisy and analogical with the voting system in the Six Counties.

Others in Listowel feel that Listowel has been victimised rather harshly especially since it was the people of the town who had to endure the unbearable smells form the factory in the formative years.

The bye-roads too, adjacent to the town, were in a shocking state after the huge whey tankers had finished with them.

The Listowel Urban Council, in particular, showed great patience with the factory people.

It was they who had to absorb the complaints of the townspeople.

The forbearance shown by the majority of Listowel people in face of the sickening and often overwhelming odours deserve a better reward from North Kerry Milk Products.

Listowel people have long been renowned for a certain naivety in industrial matters and a certain innocence in industrial enlightning. Once again the town has been caught with its trousers down.

No matter what will be said in the future, there can be no adequate reason for the transfer of the office staff 17 miles from the production area.

Listowel, not Tralee, is the recognised centre of the milk industry. If this is the case then the place for the offices is Listowel.

It may not be too late and the decision may be irrevocable but it should serve as a lesson for the future.

If Listowel was good enough to endure the growing pains, the smells and the effluent, it was surely good enough for the offices.

The article was first published in the Limerick Leader on April 10, 1976.