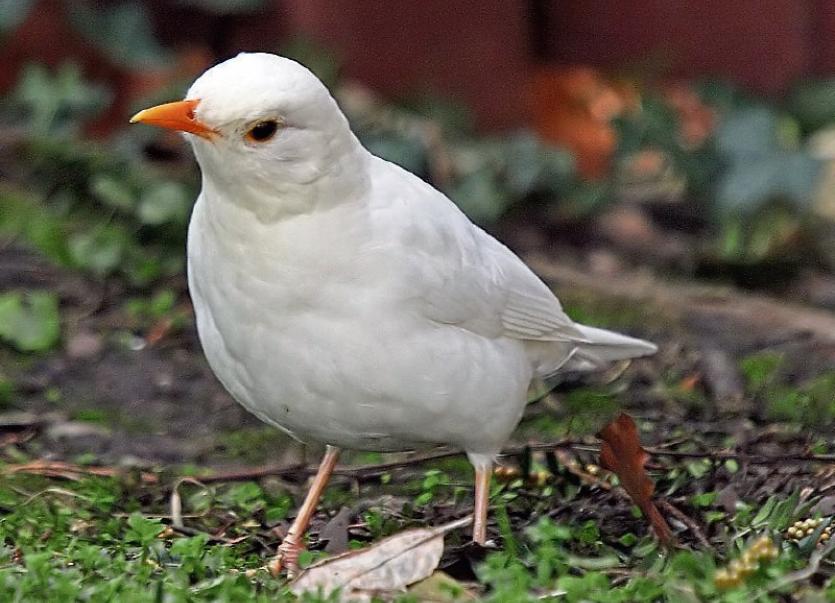 There are more white blackbirds in these parts than previously suspected, writes John B Keane

LET US start off the proceedings this week with a simple riddle.

When I was a youngster riddles had great relevance to social and cultural development but, since the advent of what is loosely known as Modern Poetry they are frowned upon.

The riddle is this:

If you found an egg on a piano stool, what English poem would immediately come to mind?” Take your time. Don’t be in a hurry.

The answer is, of course, The Lay of the Last Minstrel.

Having opened on this note of unaccustomed levity, I will now endeavour to take a serious look at the local scene.

AT THE time of writing, I have before me countless reports of white blackbirds.

It was Dan Heffernan of Islandanny who first informed me of the existence of one of these wraithlike apparitions in a grove of trees near the Heffernan home in Islandanny.

Then Frank Hall took up the story, and now, from all quarters of the immediate realm, there are reports of sightings.

Naturally, we will have to discount many of these as the creations of gamesters and halfwits but there can be no doubt that there are more white blackbirds in this part of the world than was hitherto suspected.

According to L.C. of Murroe, there are several in that district.

The same would apply to the bushy lands of Barrigone, while Mick Deenihan of Finuge informs me that between the bridges of Finuge and Listowel there are at least seven of these gentle, feathered songsters wafting up and down above the rise and fall of the tides.

Dermot O’Brien of Duagh has counted five in those fertile fields between the Smearla Bridge and the heights of Kicara, while from across the river comes an account of an exceedingly fine warbler of the same unusual species.

There is, of course, always the sad note, the unexpected and unwelcome gust of spitewind to ruffle the waters of our serenity.

Mrs. Kay O’Connor of Ballybunion writes to say that she turned off the television as soon as I made mention of white blackbirds. She did not want her children scandalised.

She gives me to understand that she is also writing to Mr. Thomas Hardiman about the programme in question and she asks finally, why I can’t be like Bunny Carr.

This, however, is the only discordant note and there are many valuable contributions.

“You think an owl hunts for mice alone at night,” opens P. J. Connell of Abbeyfeale.

“They hunt for sleeping birds and mate with them against their will often enough. This is the way the white blackbird came into the world the first time. An owl, and probably a hen blackbird or thrush. They wouldn’t be bother with a wren.”

P. J. has some other extraordinary observations but since offence is easily taken we will not dwell upon them here.

ON SUNDAY morning of last week, the water which came from the town’s taps was the filthiest to date. To say it was brown would be unfair. It was more black than brown.

There was an uproar all over the place as a result.

One man called his wife aside and told her that if she washed the spuds with it, he would not eat them afterwards.

Seriously, whatever went wrong, there was never anything quite like it seen in the town of Listowel up to this.

This could well be the straw that broke the camel’s back.

WHERE WAS Jack Faulkner when the lights went out? Like Moses, he was in the dark but the odd thing about Jack is that he can see better in the dark than he can in the light.

“I was getting on fine during the E.S.B. strike,” Jack told me, “until I went into a pub in Glin. There was a lamp inside and it dazzled me. Talk about a rabbit with myxomatosis. Did you ever hear of anyone dazzling a woman?”

I confessed I had not.

“Neither did I,” said Jack, “but it might be a good idea for bachelors.

According to Jack, women would be dazzled by bright lights if a man was lucky enough to catch them in the dark. “There’s no law against it either,” he assured me, “and if you had one of ‘em well dazzled you might be able to come around her and propose.”

FRANCES Kendall Husband is a travelling man with a difference.

He is, according to his notepaper, a “D.LITT. HONORARY,” and has several other doctorates including one for music.

He got the lot in Wales although he does not state which universities.

Doctor Husband was in Listowel recently where he slept in the garage of the presbytery.

He is most grateful to the Listowel priests who gave him a meal and a warm lie down indoors.

The venue was Moore’s public house where he held a representative audience enraptured for hours on Sunday last from noon opening time to closing time in the afternoon.

Afterward the distinguished doctor was seen heading towards Newcastle West where it is expected he spent the night.

In Carrigkerry the audience included Bill Ahern who posed many difficult questions on classical music. The doctor made light of them by answering every one.

The doctor accompanied his lecture with mouth organ music which was much appreciated by those who were present. His vast repertoire included extracts from Bach, Beethoven, Wagner and Schubert, to mention but a few. There wasn’t a word while he paraded the works of the great composers before the border people.

The upshot of the entertainment is that he has been invited back to Carrigkerry again and will give another lecture there in the not-too-distant future.

The late, great John B Keane was a Leader columnist for more than 30 years. This column first appeared in our edition of December 8 1973

FROM A cultural point of view, Listowel is an extremely busy town just now. There are three major shows in rehearsal and a fourth scheduled to begin rehearsals shortly.

First, there is the pantomime which is being produced by Fr. Pat Ahern of Siamsa fame. Fr. Ahern is also director of the new folk centre which will shortly be built at Finuge.

This year’s pantomime is Hansel and Gretel and there is a cast of 60, working nightly at Halla Realta na Maidine, so that the show will be in shape for Christmas.

With Marjorie Long and Cathal Fitzgerald helping out on the production, there is every likelihood that this year’s panto will be as successful as last year’s.

The Listowel Drama Group are rehearsing Bryan MacMahon’s fine play, “The Bugle in the Blood.”

As topical now as it was when first produced over 20 years ago, Michael Whelan’s production should be well worth a visit when the play is staged early in February.

There are many new faces in the drama scene this year.

The Listowel Players are currently rehearsing “Sive” at Medill’s Hall, in Patrick Street. Only one of the original cast remains. This is Nora Relihan who played the part of Mena Galvin in the Abbey, at Belfast Opera House, and elsewhere.

Production is by Jack McGillicuddy.

Again, there will be many new faces, including my own, as one of the tinkers.

Finally, there is the Lartigue Theatre, where many fine shows have been already staged. It is hoped that Brendan Behan’s, “The Quare Fella,” will get an airing there in the late spring. Production will be by Danny Hannon.

The last Lartigue production was “The Long and the Short and the Tall,” by Willis Hall. It was widely acclaimed at the time and later presented in Gurtycloona, in Bantry. “The Quare Fella” is an ideal choice for this young and talented group.