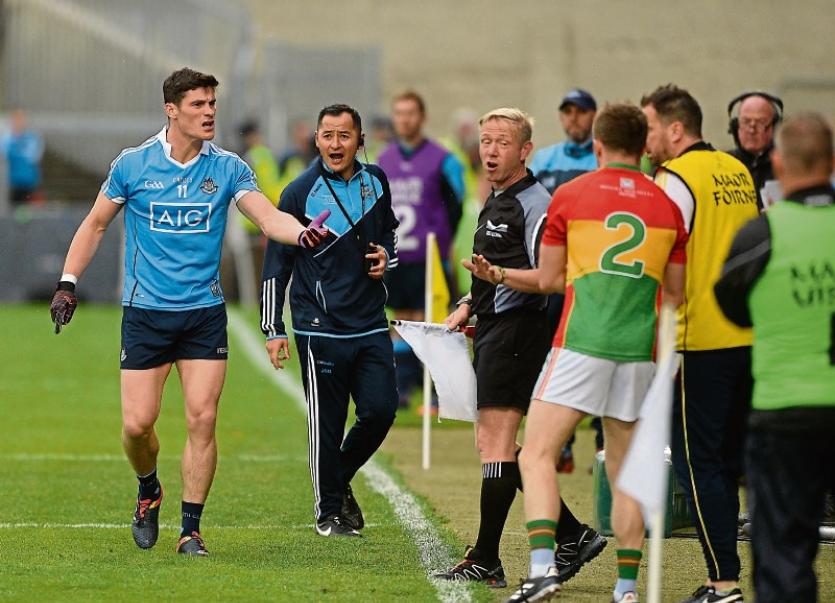 Diarmuid Connolly has received a big ban for a minor altercation with a linesman. What would he have made of Glin v Listowel? Picture: Sportsfile

HOW LONG more is the GAA. going to tolerate the successive invasions of playing pitches by so-called supporters?

It happened again last week in Finuge during a football tournament when Listowel played Moyvane. A number of thugs ran onto the pitch and assaulted players. To watch pseudo-supporters milling around the goal area was enough to make one spectator comment, “The GAA is finished if this sort of thing continues.”

He certainly had a point. I can forgive players fighting in the heat of the moment. Anyway, the fight is generally over and done with in a matter of seconds.

Even when there is a flare-up involving a number of players, the referee can always resume control with disciplinary action.

The referee, however, is powerless against those hooligans who rush on to the field of play or who create disturbances contiguous to it. Is there no answer or is there a way to effectively deal with those who would spoil sport for everybody?

If there is an answer, it had better come soon.

I met Jack Wilberforce Faulkner in Finuge during the carnival. Glin were playing Foynes when Jack joined me on the sideline.

“Who are you shouting for?” I asked Jack.

“How can I shout,” said Jack, “with my supper on one side and my dinner on the other?”

Jack went on to tell me he never becomes involved in rows over anything, no matter how serious the provocation. He told me there is always a way out if one is prepared to keep the head.

In many ways Jack is as wise as his late Chinese counterpart, the famous Confucius, who said exactly the same as Jack only another way.

No doubt great minds think alike. We stood on the sideline while the tide of play ebbed and flowed. Glin were deservedly victorious but Foynes are a team who can and must improve.

When the match was over the rain came down and we hurried to Tierney’s.

“You know what we do when it rains in Glin?” asked Jack.

“We lets it rain,” said Jack, and with that he led the way towards the pub.

SCOOP of the week is the news that a number of woodcock have been seen in that pleasant spot know as the Sallies, in the townland of Affoulia.

The woodcock were first seen by Mrs Mary Anne O’Shea about a fortnight ago in that place know as Aristotle’s Field, which is adjacent to the Sallies.

Another native of the area informs me that the woodcock left Affoulia exactly the same time as Jacqueline Kennedy married Aristotle Onassis. In case the reader would be inclined to tie-up Aristotle’s Field with Aristotle Onassis, let me make it clear that the field was so called as far back as human memory can recall.

Local people attach no significance to the departure of the woodcock coinciding with Jacqueline Kennedy’s marriage.

There are some, however, who say that the return of the woodcock is a sign of fine weather. Con Hartnett, who lives close by the townland of Affoulia, claims that there is a thrush who sings on a palm tree at the gable-end of his house, without equal as a songster in any part of this country.

He starts his refrain at break of day and he sings all through the morning and noon before departing to search for his lunch and supper. In the evening, he returns and sings away quite happily until night falls.

There is no song like that of a thrust in good voice, and I think it is vitally important to record instances of out-of-the-ordinary singing.

Let others speak of wars and mergers and matrimony but we will always be faithful to the ideals which put song above the mundane.

NOW to strike a less poetic note. Glin and Listowel met in the final of the Finuge Football Tournament last week. The game drew a small crowd and it rained throughout a dull, drab evening.

If the elements were drab, however, action on the field of play was not because, from the start of the game right to the end, there was a constant scrapping.

In the end, Glin deserved their victory. They were more tenacious and although they did not go in front till the final minute they were always poised never more than two points behind.

It was a hard game, in many ways redolent of the faction fighting of the last century. One blessing, however, was that the crowd on the sideline was never involved physically, and for this we must be extremely grateful.

In all, six players were sent to the sideline by referee, Pat Lane, and two others were helped off as a result of injury.

If Glin won the football, I would say that Listowel had an edge in the matter of fisticuffs.

Their punching was faster, sharper and crisper. Some of the Glin stalwarts were more inclined to wrestle. Wrestling has little entertainment value except when professionals are involved.

Some of the best punching was seen early in the first half when a few players were temporarily flattened. Of the six players sent off, I would say that only four were guilty.

Other players got away with worse without caution and there was some interesting belting behind the referee’s back. It is a pity that Gaelic football should be reduced to such a level.

On the other hand, interested parties will tell you that there is no hope of drawing a crowd unless there is a prospect of violence on the field of play.

If Listowel and Glin meet again, there should be a record crowd. Actually, there is little between the teams and if the fighting could only be eliminated there would be a rare treat of excellent football.

Another unsavoury aspect of recent games is the incitement by hysterical onlookers when they advise their teams to hit and kick. Be that as it may, the Glin versus Listowel game was full of good football. There were some beautiful passing movements and some well-taken scores. I will single out nobody for special mention either for football or fighting. I would say one of the chief reasons why Glin won was that they had a balanced side while Listowel had a number of passengers.

I hope the teams meet again and I hope they play nothing but football when they do. It’s a shame to see genuine talent being dissipated by disorder and violence.

The field of play is a place for the building of lasting friendships and happy memories, a place where good example in sport should always be evident. Anybody who says otherwise is no friend to the game of Gaelic football.

The late, great John B Keane was a Leader columnist for more than 30 years. This column first appeared in our edition of May 12 1973

DUAGH is in the news again. I have received a number of letters concerning this handsome village near the Feale River. One comes from Pat Kennedy of Murroe, County Limerick.

“Dear Mr. Keane, would you ever send me this poem:

Who trampled down the English flag,

The boys of sweet Duagh”

Alas, Pat, I do not know the words of the song in question save for the verse you quoted and another quite like it which runs like this:

Who hurled back the English knave,

With hatchet, rope and saw.

Maybe some reader will oblige Pat Kennedy with the words he requires.