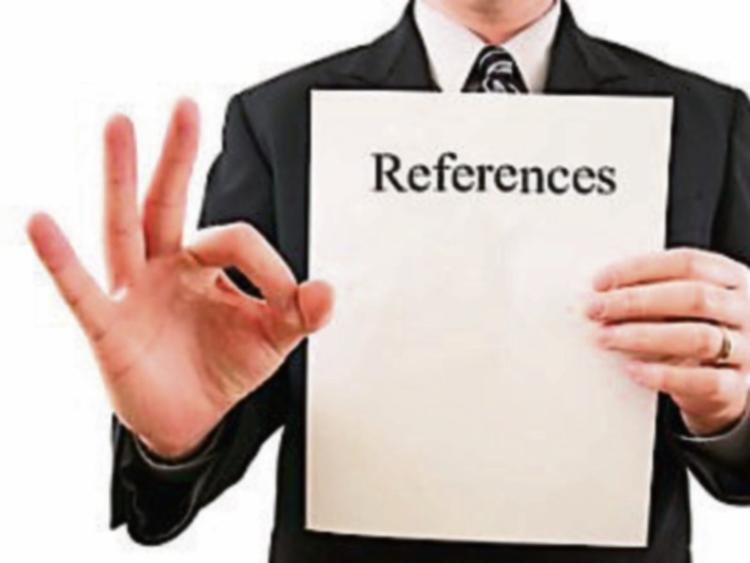 When providing a reference is unavoidable, be sure to follow John B's style

IT IS SEVERAL years now since I first debated the subject of references in these columns.

I would get letters from young gentlemen who had just emigrated to England requesting references which would show that they had been in my employ as barmen and were honest, capable and sound in wind and limb, etc, etc.

Some of these young gentlemen would have terminated fairly extensive tours of the country’s penal institutions where they spent terms of weeks and often months at a time.

Then would come a bulky letter requesting information about an applicant for a position as postman in London or Manchester.

My name would have been given by the applicant as a referee and the information required would include an account of the applicant’s character, extent of trustworthiness, list of former positions held by the applicant and how long he had been working with me.

In all cases I had no knowledge whatsoever of the applicant and often when I would write and ask them why they had chosen me the answer was always the same. They could think of nobody else.

There is no such thing as a bad reference. If ever I am asked for a reference by a doubtful character and have no way of refusing, I write something like this.

“Michael So and So is well known to me. So are his father and mother and the rest of his family. You would find it hard to meet nicer. He is a man of undoubted talent and will definitely bear watching in the future.”

The trouble is that they have often found themselves in positions of trust as a result of submitting such references.

Perhaps the best reference ever written by one human being on behalf of another was that composed by the poet and teacher Donnchadha Rua Mac Conmara for his pupil Richard Fitzgerald.

There is a fine translation by Michael Harnett, the Newcastle West poet from Eachtra Ghiolla an Amaráin and Other Poems edited y Tomás Ó Flannghaile and published by Sealy, Byrnes and Walker, Dublin, c.1910.

Unfortunately, because of its length I will not be able to furnish the whole.

Here, however, is the first half. When the evenings are longer and the frost evicted from the air, I may present the other half.

Whereas there has come to my school

And the active, accomplished,

And the speedy, swift-footed

And the broad-shouldered, spirited swordsman,

By name the gallant Richard Fitzgerald:

Learning the lessons, arguments and arts of the school

And constantly courting the lovely ladies

Namely the nine sweet spirits who sit hard by Helicon

Ever bathing Irish poets in the brook of the bards:

For these reasons I order and command

From Coleraine to Cashel

From Lismore to Letterkenny,

To give without grudging

To enrich without refusal

To offer no opposition to

As I mentioned last week it is now a fact that Joe Quaid’s life and times, at which he has been working for several years now, is still far from completion.

The Mercier Press of Cork have agreed to take over the job and Joe is agreeable. What will happen is this. Nollaig McCarthy, Raidió Éireann’s outstanding interviewer, will journey to Joe’s home in Knockadirreen, which commands a sweeping view of North Kerry, West Limerick and a fair portion of North Cork.

Here she will sit down with her tape recorder and with gentle prompting inveigle Joe to recall the best of that which is past, in short, all the customs, characters and events of consequence over the three generations which span from his Athea boyhood to the days of leisurely retirement in his present abode at Knockadirreen.

I will be sitting in at these interviews and while the slate-grey clouds scurry across the uplands of Derk Mountain overhead us the tales of other times will come flooding from the past.

There is no more suitable setting that I know of for storytelling.

But Joe’s life will not be the only one to come under scrutiny for it is also the plan of Mercier to record in print the life and times of a matchmaker. Maybe Patrick Ahern of Carraigkerry would be interested?

There is a book planned on a bachelor or bachelors and who knows but Willie Finucane and Jack McElligott might fit the bill.

The life and times of an Irish itinerant is a definite part of the project, which will include a dozen or so books. I will give nobody three guesses as to the identity of the itinerant.

The books will cover the Irish rural scene from the twenties and as far back as tradition will carry its recorders.

It is hoped that every aspect of rural life will be covered for posterity.

As Sean Feehan of Mercier said when I spoke to him last: “This,” said he, “could be a memorable series and it is important to record these people now. Too much of what was valuable had been lost for too long.”

It is gratifying to recall that many of the subjects of the planned books made their first appearance in the Limerick Leader.

AND NOW a short letter from a lady in Athea or, to be exact, Upper Athea.

“Dear John B., I read in the Limerick leader of the longest word.

“It would seem to be unpronounceable.

“ Well, I discovered this one in a very interesting book and thought other readers of your column might be interested in reading about it, mainly Jack Faulkner.

“The word is TAUMATAWHAKATANGIHANGAKOUTAMATEA. It is a place in New Zealand. It is a Maori word for the name of a hill in the southern Hawk’s Bay district of North Island, New Zealand.

In English it means the place where Tamatea, the man with the big knee, who slid, climbed and swallowed mountains and was known as Traveller, played on his flute to his loved one.

The late, great John B Keane was a Leader columnist for more than 30 years. This column first appeared in our edition of March 3 1093