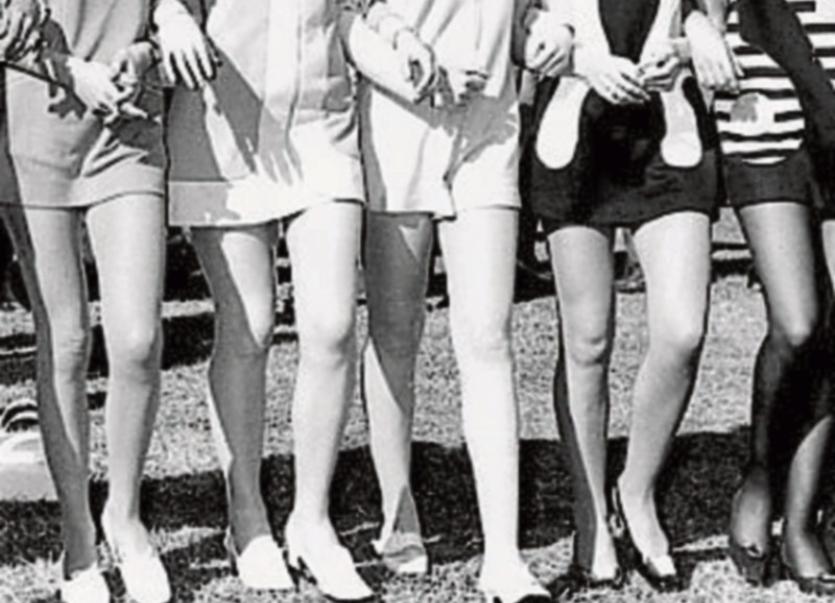 THE best description I ever got of mini-skirtedness was from a curate who was renowned for his trite turn of phrase.

The reason I mention mini-skirts at all is because of a letter I have just received from one who signs herself “Mother of a Ballaugh bachelor”.

‘Twould make a wonderful title for a television play. Anyway, she takes exception to recent remarks of mine concerning a flier of a widow whose nocturnal necromancing I briefly described in these columns some weeks ago.

I won’t quote all the letter. There are four closely-packed pages. I will begin in the middle and stop when I feel that no useful purpose would be served by going further.

“It is your innocence,” she writes, “that makes me laugh. My marriageable son would not dream of marrying the low types that frequent dance-halls these days.

“A lot of them don’t be able to get up for Mass on Sunday mornings. I have seen for myself in a public house in your own town these young ladies swallowin’ down beer, whiskey and vodka.

“I have no objection to my son marrying. I would give him every encouragement but where would he find a respectable girl these days, a girl who would stay at home and mind her children and look after the housework?

“I saw a girl during Glin carnival last year with her navel exposed and this is supposed to be fashionable. Can you honestly tell me that these ones with the short skirts are modest or decent?

“It is a fine thing to go around naked. That would be at least honest but the modern misses are worse than naked. They are seducers. They should be whipped. What a life they would lead a decent boy. I would not be seen in the same company as them.

“The real reason there are so many bachelors in rural Ireland is not scarcity of women. It is that no good living man is prepared to risk his whole life for a half-naked alcoholic.”

This is only part of the letter. There are passages which would literally burn the paper were I to include them. Mother of Ballaugh bachelor is entitled to her opinion. It is not for me to say whether she is right or wrong.

What I will say is that the world would be forlorn if there were no more mini-skirts.

A reader informs me that almost every town had its own name for the driodars which would be left over in public houses after busy days or nights. A Newcastle West reader writes to inform that when he was sent to the pub as a gorsoon fifty years ago he was told to get tuppence worth of “Sups of All Things”.

The Newcastle reader agrees that no two cargoes tasted the same.

Sometimes a pint glass of the mixture would make a man drunk and another time a gallon of it wouldn’t knock a stir out of him. Let me quote from the Newcastle man.

Another correspondent informs me that driodars was only regarded as a base for more potent mixtures in his native district of Charleville.

A box of boot polish might be added or a pint or two of paraffin oil, then commonly know as lamp oil. These additions helped flavour and stiffen the concoction.

“I never heard of anyone dying from a dose of it,” the Charleville correspondent concludes.

All Sorts as it was generally called in this part of the world was a great favourite with travelling tradesmen and artists.

The latter were mostly musicians but there was a fair sprinkling of contortionists, long whip crackers, wheel cockers and chain men.

Neither of these two groups was choosy about the type of driodars they received.

Mostly they slept out of doors and they would buy a half gallon or so of All Sorts before retiring.

They would lace it with lamp oil or methylated spirits and there were some who liked a drop of turpentine to spice it a bit.

Sometimes the imbibers went temporarily insane. It may have been the incompatibility of the lamp-oil and one of the ingredients in the half gallon of driodars. Whatever it was it often drove these now-extinct travelling men crazy.

They could be heard screaming and shouting at night like men demented. Sometimes they would run barefoot dressed only in a short shirt through the streets of a town, the eyes wild in the head, the mouths open and froth-covered.

They were frightening spectacles to those who were not used to them but to those who were, they provided only the assurance that all was well with the world because these liquor-crazed miscreants never assaulted people or never used strong language.

In today’s lingo they might be described as men doing their thing. In the morning they were up at the crack of dawn ready and eager to work.

With no suggestion of disrespect driodars were also very much in demand for the wakes of poor men or paupers.

A publican with a good heart would employ all his talents to ensure the mixture was not wanting in the unusual. It was up to the mourners to colour according to taste.

FOR many years a servant boy worked with a farmer until he finally gave his notice on the grounds that he wasn’t getting getting enough meat for his dinner.

The farmer took him to court claiming that the boy had not finished out the time he was paid for.

The boy’s defence was that the farmer owned him money as a result of not providing sufficient meat.

In his evidence the farmer made the following statement:

“He has plenty to eat. Every day he gets plenty cabbage and bacon.”

“I believe you,” said the judge, “but wouldn’t it be nicer if you gave him plenty of bacon and cabbage.”

The late, great John B Keane was a Leader columnist for more than 30 years. This column first appeared in our edition of February 15, 1972