Thackeray should have got off his backside in Listowel 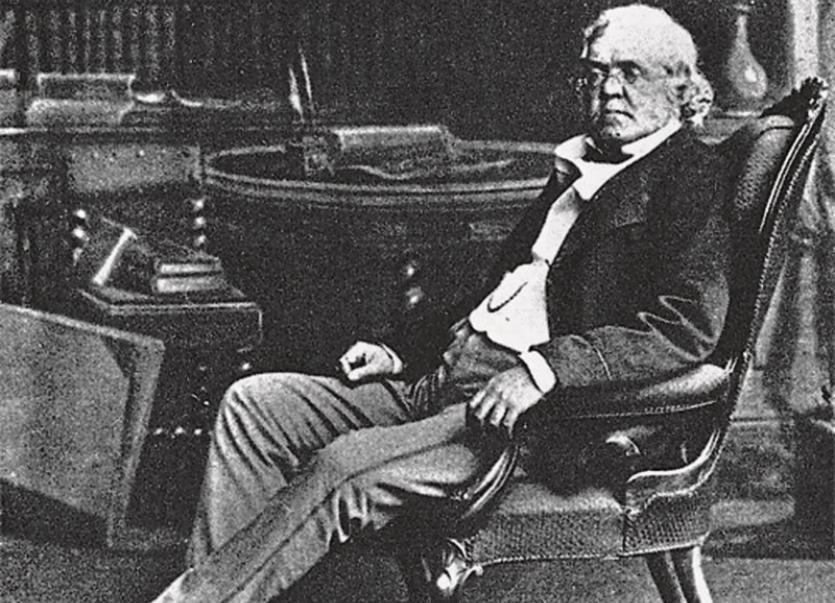 FROM time to time towns and villages fall in for their fair share of malignment or praise and this is a good thing because it shows the mettle of a place and makes people accept the unchangeable fact that none of them is immune to criticism.

If ever anybody feels put out about overexposure read what William Thackeray had to say about the town of Listowel on his way from Killarney to Tarbert in 1842.

“But pretty as Listowel is from the distance it has, on a more intimate acquaintance, by no means the prosperous appearance which a first glance gives it.

“The place seemed like a scene from a country theatre, once smartly painted by the artist but the paint has cracked in many places …. Here of course the usual crowd of idlers gather round the car, the epileptic idiot holding piteously out his empty snuff box; the brutal idiot in an old soldier’s coat proffering his money box and grinning and clattering like the single half-penny it contained.

“As for trade there seemed to be none, a great Jeremy Diddler kind of hotel stood hard-by swaggering and out-at-the-elbows and six pretty girls were smiling out of a beggarly straw-bonnet shop dressed as smartly as any gentleman’s daughters of good estate … but of all the roads over which human bones were jolted the first part of this to Tarbert deserves the palm.”

He has more to say, for instance a nasty reference to the absence of tradesmen and artisans in the town.

But what a pathological liar the man is. Thom’s Directory of 1829 credits the town with a hundred tradesmen and artisans not to mention several doctors, surgeons and teachers.

And why shouldn’t the six pretty girls he saw be dressed as well as any gentleman’s daughters? What Thackeray did, of course, was to sit on his bottom in the stagecoach and not move a foot to alter his first impression.

In this respect he was no different from any another correspondent who passed through since then.

At the time of Thackeray’s visit it is interesting to note that the town had twelve boot and shoemakers, four nail makers, six blacksmiths, two apothecaries, five coopers, two glaziers and scores of other trades.

A fairer description of the town would be that given in Slater’s Directory of 1856: “It is cheerfully and pleasantly situated on ground gently declining to the banks of the River Feale over which is a handsome bridge of five arches.”

The hotel so foully described by Thackeray was of course the Listowel Arms, whose then proprietor John Adams enjoyed a wide reputation as a landlord.

If Listowel was unlucky to be visited by Thackeray, Ballybunion was fortunate that it was visited by Tennyson some years later.

In his poem, The Lotus Eaters, there is a description of cliff walls which was inspired by his visit to Ballybunion which he praised left, right and centre before leaving it.

Thomas Moore visited North Kerry too and passed through Athea on his way to Kilmorna, now famous for its bachelors. In Kilmeaney House where he was a guest, Moore wrote the song Morna’s Grove.

Brendan Behan never wrote a song about Abbeyfeale but he told me himself that he never passed it without wetting his whistle. Joys’ corner house was his stopping place.

I HAVE been taken to task a few times recently for acting as a patron to the Anti-Common Market Campaign. I could cite a thousand reasons for my stand but one will do for a beginning.

If I have to go on a long and hazardous journey and if I must have companions I would like them to be of my own choosing.

I would also like if their backgrounds were without reproach and if they had reputations for keeping their words and promises.

Now for an interesting letter from a Duagh gambler.

“I struck more knaves,” he says, “than there are blades of grass in Jer Dillon’s farm of Limerick.

“Some time ago you wrote about post mortems on games of forty-one and twenty-five, and so on. You never said anything about the table belting which is the best part of the game.

“I mean what is the use of beating a knave with the five if you can’t hit the table a good bang to knock satisfaction out of the winning.”

The Duagh man has a point and I am all for table belting although it is frowned upon in some schools. A relation of mine from Lyreacrompane was once in the last four of a gamble for a cock turkey. He only wanted five to win. One trick and the cock turkey would be his.

Clubs were trumps and the man whose lead it was put a trump on the table which was the correct thing to do as one must always lead when there is someone aboard who needs only one trick to win.

As I say he led off with a trump. It was the deuce of clubs, a good hardy class of a card that often went round the table without being beaten.

The next man covered it with the queen. There was no rob as the ace was not playing.

The next man had the five but since he had good picture cards with it and since he only needed fifteen for game he decided to hold on and go for his own game especially as he had seen the ace of heart in the hand of the man next to him.

His neighbour stuck the ace of hearts into the dealer who was my cousin. That worthy gentleman had the knave and he struck with all the force of the hammer of Thor.

As he smote the red ace all the other cards leaped on the table so powerfully did he come down.

He won the turkey but he broke his wrist.

What happened to him was not uncommon. The County Hospital and the Bon Secour have played host to hundreds like him.

I personally know a man of 80 who broke two fingers while striking the nine of diamonds with the ten, and I heard of a man who broke his hand belting the four of spades with the deuce.

When the spirit of competition catches a man and if he has a few drinks taken he is capable of smashing a weak table to smithereens.

A heavy man with the five in his hand waiting to strike a knave or an ace of hearts is capable of reducing a strong table to bruscair.

Sticking a low man for spite is asking for trouble, because if the low man has the beating of the man that stuck him, the table must be very strong indeed to withstand the fierce wallop it is certain to get in an instance like this.

As you go through life, dear reader, you will see tiny deformities and scars on the hands of other people. These, you may be sure, are hallmarks of your true gambler.

The late, great John B Keane was a Leader columnist for more than 30 years. This column first appeared in our edition of February 5, 1972