RACING: Your guide to the fifth day of the 2022 Galway Festival 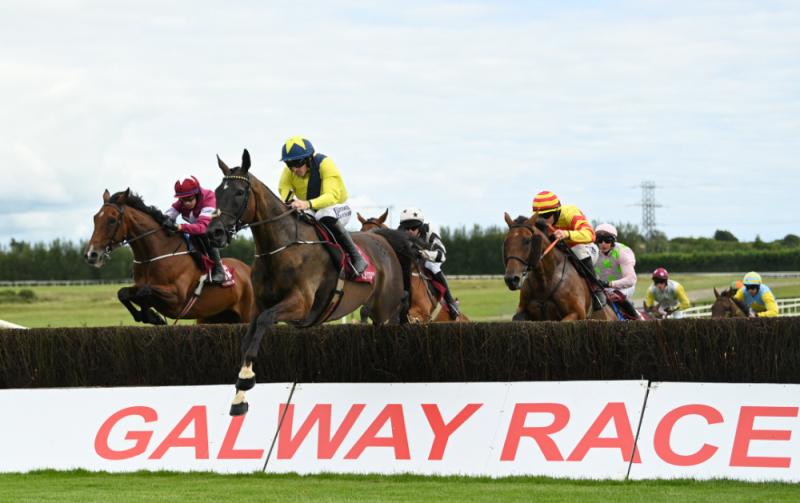 The Galway Festival continues on Friday evening with more cracking action at the track. PIC: Sportsfile

The Galway Festival continues on Friday evening with more cracking action at the track.

The action gets underway at 5.00pm and concludes at 8.40pm. The going on the Jumps course is Good and the Flat course is Good to Yielding. Showers are forecast at the track and you can find the latest odds at BoyleSports Galway races betting

The opening €80,000 Galway Handicap Hurdle (5.00pm) sees Zoffanien as a leading player in the two-mile event. He bounced back to form in fine style with a deserving victory at Killarney earlier on this term. Lunar Power was talented novice who filled second in a pair of Graded events and he is interesting pitched into handicap company here, whilst Willie Mullins has Tempo Chapter Two who was successful at Fairyhouse in February, but has struggled in three handicaps since.

Ebasari was a smart winner at Downpatrick on his latest start and is another unexposed runner, along with Jiving Jerry who won at Galway in October, before filling second at Naas when last seen. Vultan is a fascinating runner here for Tony Martin as he makes his debut for the yard having won at Gowran Park when last seen, whilst Wild Shot has enjoyed a win on the Flat since recording successive victories at Downpatrick and Tramore earlier this year.

Another highlight on the card is the €80,000 Guinness Galway Blazers Handicap Chase over an extended two miles and six furlongs at 6.00pm. The race includes former Irish Grand National hero Freewheelin Dylan as well as the likes of Bussselton, Jeremys Flame and Batcio.

The undoubted highlight is the 6.35pm, the €110,000 Guinness Handicap over 12 furlongs back on the level. Aidan O’Brien looks to have a fascinating runner in this event in the shape of Shark Bay. A 135,000gns son of Australia, he opened his account at Cork earlier this term, before arguably disappointing in three subsequent starts. However, it was much more like it when recording a neck win at Killarney earlier this month, before backing that up at Gowran Park last week when winning in workmanlike fashion, displaying a good attitude to score by a head. It will be interesting to see how he handles Galway given he still seems to lack experience despite this being his 10th start, but he clearly has a will to win and is deeply respected.

Other interesting contenders include Cask Mate who has finished in mid-division at Galway of late, but remains capable of going close along recent Ballinrobe winner Merroir. Laelaps was a good second at Ballinrobe last time out and also needs respect. Dha Leath has won her last two starts and impressed when striking at Roscommon last time out and is another of note along with recent Ballinrobe scorer Sionnach Eile in this event.