TIPS: Ruby Walsh and Paddy Power kick off Derby day at the Curragh ahead of a huge day of flat racing 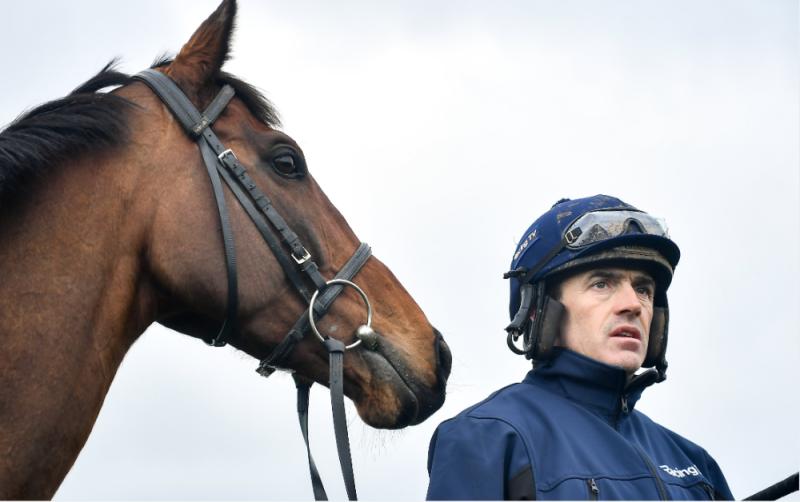 Ruby Walsh is part of the expert panel previewing the Derby day action at the Curragh, Photo by David Fitzgerald/Sportsfile

Paddy Power presented a live edition of From The Horse’s Mouth show at the Curragh today. Their expert panel look through the card for a cracking day’s racing on Dubai Duty Free Irish Derby day.

Ruby Walsh's tip for the second race of the day,  2pm Dubai Duty Free Summer Fillies Handicap was Dexter Belle for Eddie Lynam who will be ridden by Chris Hayes. At the time of writing the four-year old sits at 12-1 so definitely one for a look at each way.

The third race of the day, Dubai Duty Free Celebration Stakes listed race has Colin Keane and Ger Lyons as the favourites with Straight Answer, the pair were prolific on day one at the Curragh combing for three winners. Ruby Walsh said he couldnt pick a winner for this one and when he passed to Fran Berry who felt similarly but said Pretreville with Ronan Whelan on his back at 17-2 was worth a mention.

The flying six furlong GAIN Railway Stakes is up next on the card, and Fran Berry cant see past Aidan O'Brien's Blackbeard who currently sits at 6-5 in the betting but it was disagreement from Ruby Walsh who fancied the little discussed Shartash under trainer Johnny Murtagh who stands at a tempting 11/2.

Much of all the talk surrounding the Irish Derby has been Champion trainer Aidan O'Brien's decision to only have one runner in the Group 1 classic race with filly Tuesday.

Ruby Walsh remains unimpressed by both the market leaders in Tuesday and Westover who sit at 7-4 and 6-4 respectively. The Kildare man has instead opted for Lionel who will be ridden by Jamie Spencer in the race, who himself sits at a promising 11-1 but Ruby does recommend an each way bet.

Fran Berry remains form despite outside doubts that the horse he would want to be on come 3:45pm at the Curragh is Tuesday. But Berry mentioned the trainer of Lionel, David Menuisier who the jockey worked for in England and says the French trainer is hot on his horse for this one.

Special mention was also made to French Claim at 25-1 who the experts say has a chance should some rain arrive.

The rest of the card

The ARM Holding International Stakes following the Derby, Rumbles of Thunder got both votes from the experts and leads the betting for the 4:20pm at the Curragh at 2-1.

Fran Berry's vote for the Dubai Duty Free Handicap went to Joseph O'Brien and Dante's Pass and believes the potently heavy ground could suit the 11-1 shot.

The last race of the day is at 5:25pm and is the  Dubai Duty Free Handicap over a mile and two furlongs. Fran Berry's last pick of the day was Crystal Black for Dermot Weld with Chris Hayes on his back and the four-year old currently sits at 9-1.