RACING: Tips and analysis for Thursday’s card at Limerick 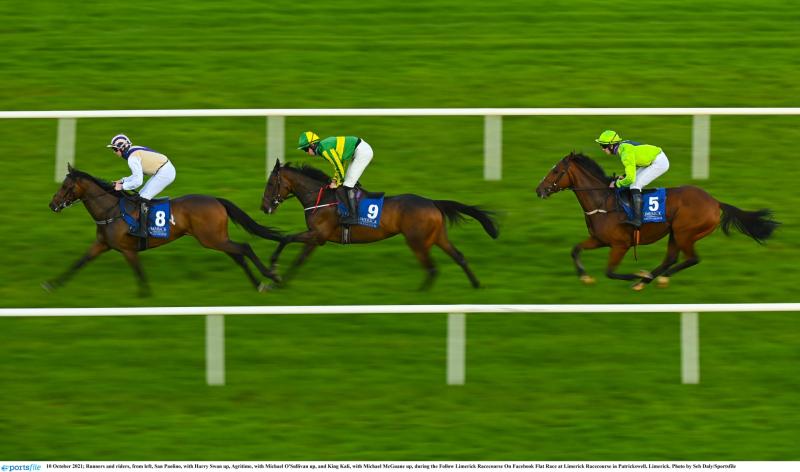 RACING: Tips and analysis for Thursday’s card at Limerick

Racing begins at 1.20pm and concludes at 5.20pm - find all the latest horse racing odds with Betfair.

The ground is currently Good, Good to Yielding in places.

At 3.38pm, the McDermott’s Gala Patrickswell Handicap Hurdle is the most valuable race on the card, contested over two miles and five furlongs, with a field of 16 runners heading to post.

Noble Birth finished second of 10 at Navan last month and will appreciate this step back up in trip - judged on his staying on performance last time.

With a similar profile is Francois, who also moves up following a second last time and there is little to separate the two on paper.

Sparkling Stars won over hurdles at Naas, before finishing second at Navan just over a month ago and is also firmly in the mix here, although conceding weight all-round will be tough.

Itsnotinit was a course and distance winner back in December and is not without hope on this switch back to hurdles - with the blinkers on.

Opening the meeting at 1.20pm is the Molly’s Late Bar Maiden Hurdle, with a full field set to compete over the two-mile trip.

Bynx was massively unlucky not to score in a three-way blanket finish at Cork a fortnight ago, and on form, is plenty good enough to shed her maiden tag here.

Weddell Sea was useful on the flat and looks progressive, having ran into fifth on hurdles debut in February, in a race that was won by HMS Seahorse.

Prince Of Peace is another useful flat performer who has joined a new yard for this hurdle debut, and could be the pick of the unraced over hurdles.

Walk In The Park mare and newcomer Leitrim Park is the pick on paper, related to smart dual-code gelding Clondaw Warrior, as well as being closely related to a couple of bumper winners.

Magic Conquerer’s third in a bumper at Naas is the pick of the form from those already raced, and the Presenting mare is entitled to do better this time around.

Visible Attraction was somewhat disappointing when 6/4 favourite on debut, but may well be better for that run and enters calculations.