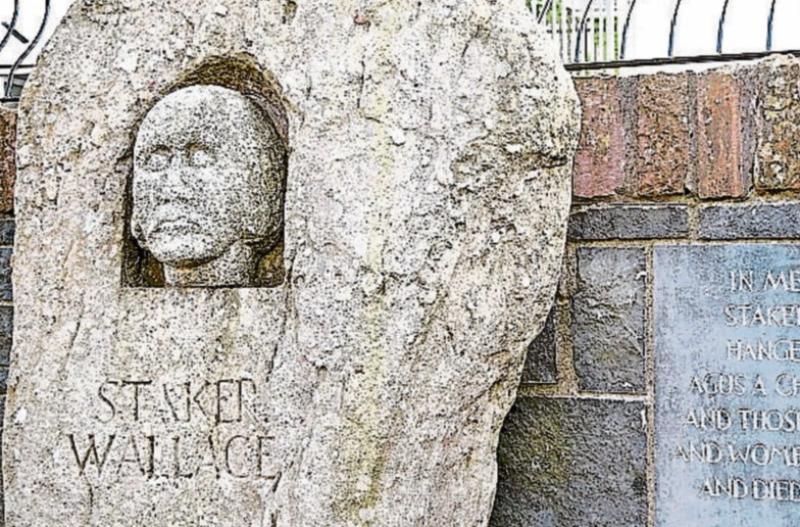 The Staker Wallace memorial in Kilfinane

“ARE these the bones of Staker Wallace?” was the headline in the Limerick Leader in 2006 after human remains were found in Kilfinane.

Sixteen years on we have an answer. This all goes back to 2006 when human bones were discovered in Kilfinane when the council were carrying out urban renewal works.

Locals believed that the remains of Wallace were among the bones found. It was thought three men were buried in the grave.

Patrick Staker Wallace (or Wallis) was executed by the British in the lead up to the 1798 rebellion. Wallace was commander of a local division of United Irishmen and was arrested following an alleged plot to murder the local landlord, Capt Oliver.

The 65-year-old was offered his freedom by Capt Oliver in return for the names of other United Irishmen and the location of their weapons. He refused.

Wallace was jailed in Kilfinane and underwent public flogging before he was publicly hanged and beheaded. His head was put on a spike above the Market House for a number of weeks before he was buried in the town.

The actions of the Irish patriot, believed to be from Bulgaden, were never forgotten. He is remembered in song - A Lament to Staker Wallace; name of a GAA Club and a statue in Kilfinane.

However, it appears he was forgotten about for 14 years as the Leader revealed in 2020 through correspondence from the council that, “This project was put on a back burner due to ongoing pressure of work”.

Kilfinane man James O’Brien, who raised his concerns in 2020 over the delay with Minister for State Niall Collins, said: “Those bones lay forgotten for over 200 years. It's a fright to God if they are forgotten again.”

Mr O’Brien can vividly recall the day the bones were discovered in 2006.

Mr Collins said, “Sitting on skeletal remains for over 14 years, which are an integral part of the history, heritage and culture of Kilfinane is simply not acceptable”. He called on the council to immediately begin the testing process.

Funding for the work was sought in 2021 under the 2022 council budget with an osteoarchaeologist procured in October 2021. Human osteoarchaeology is the scientific study of human skeletons excavated from archaeological sites

Funding was confirmed in January 2022 and the bones were delivered to the osteoarchaeologist that month.

Sarah McCutcheon, archaeologist with Limerick City and County Council, said the osteoarchaeologist has now completed her review of the bones.

“A summary of the information gleaned is that the minimum number of individuals contained in the collection is five although there might be up to seven. There is no clear evidence of any skeletal material from a 65-year-old individual (Wallace’ age when he was killed).

“The age range for the material is between 25 and 45-years-old. There is no evidence of trauma on any of the bones in the group.

“It looks like Staker Wallace’s bones may not be part of the collection,” said Ms McCutcheon.

The whereabouts of the Limerick patriot remains remain a mystery.