University of Limerick reveals timeframe for its city centre masterplan 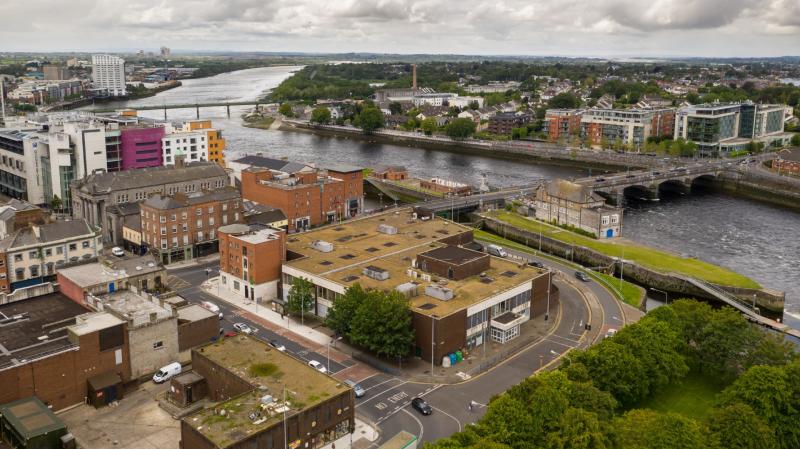 An overhead view of the University of Limerick's city centre campus

THE UNIVERSITY of Limerick (UL) has announced it will lodge a planning application for further development of its city campus by the end of 2023.

The third-level college has taken over the former Dunnes Stores complex in Sarsfield Street, and plans to link up with the local authority to further develop the space around the building, which it purchased in 2019.

Next year will see a development plan unveiled, UL working hand-in-hand with the council which is aiming to develop the riverside overall, as part of its World Class Waterfront project.

UL president, Prof Kerstin Mey said: “We are planning for a major educational, economic, cultural, and social footprint in our city centre campus. Developing the plan and design of the future campus as a pivotal site on Limerick’s waterfront will take some time but we will be at planning application stage by the end of next year.”

Ultimately, it’s intended the city centre campus will have up to 3,000 students.

She revealed there has been a significant response to a call-out to the campus community seeking expressions of interest for an interim use while the masterplanning for a wider use takes place.

Potential future uses for opening the existing footprint of the building – around 5,500 square metres – will be announced in due course, but Prof Mey said: “UL is committed to Limerick city and do want to use the existing building in the meantime to engage with the city, its communities, businesses, and industry in a meaningful way.”

In the short-term, the UL city centre campus is set for a face-lift with an internationally renowned artist to create a mural on the Sarsfield Street building.

Working in tandem with local artist collective Draw Out and Spanish urban artist Digo Diego, a mural will be painted on the full side of the building facing the river at Honan’s Quay.

Limerick City Build, who run Draw Out, have started enabling works for the project and will host an event called ‘Leave Your Mark’ for Culture Night at the building this Friday at 6pm.

This will be an introduction to street art event facilitated by two street artists where members of the public can leave their mark with paint under the skin of the mural and on the fabric of the building, as a mark left in time on the mural’s foundation – a family friendly graffiti activity.

Admission is free – all welcome.