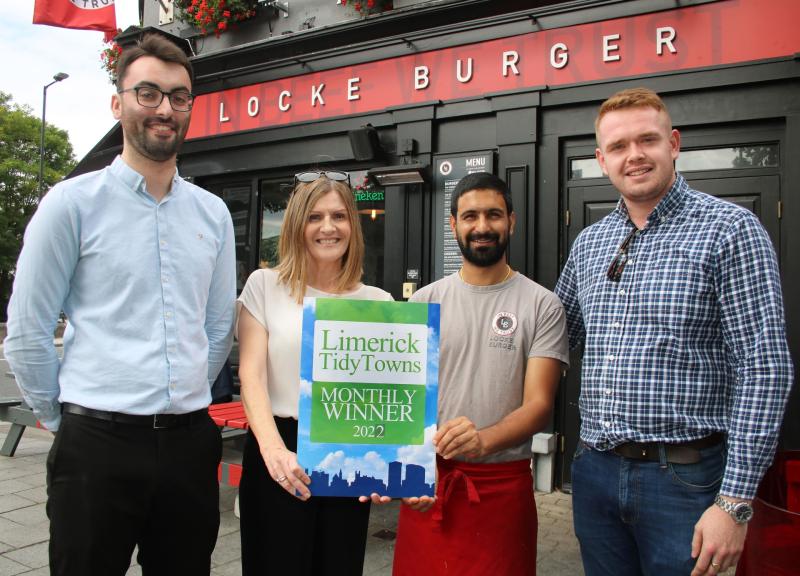 AN INDEPENDENT burger restaurant which opened at the end of the first Covid-19 lockdown has won a Tidy Towns award.

It was only in the summer of 2020 that it found a new home on the corner of George’s Quay and Athlunkard Street.

Now, it’s won a Limerick City Tidy Towns award, with the judges praising the transformation from a derelict unit into a fully functioning food outlet.

Maura O’Neill of Limerick City Tidy Towns said: “The opening of Locke Burger’s new permanent home on George’s Quay was one of the few highlights of Summer 2020, just as we were coming to the end of the first Covid lockdown. Not only did it offer a high quality new takeaway option which encouraged people back into the city, it also transformed what was a previously derelict building into this beautiful new unit. The contemporary grey paintwork contrasts strikingly with the bright red signage and door and it is a fabulous addition to the Medieval part of the city, especially with its outdoor seating by the river which brings a renewed buzz to the already popular Locke Bar.”

Since the business started, Locke Burger has also added a larger dine-in unit at Castletroy.

As a monthly winner, Locke Burger will be in with the chance of winning this year’s overall prize at their annual event to be held early in 2023.