On a wing and a prayer: Brave bungee jumpers raise €30,000 for Limerick charities 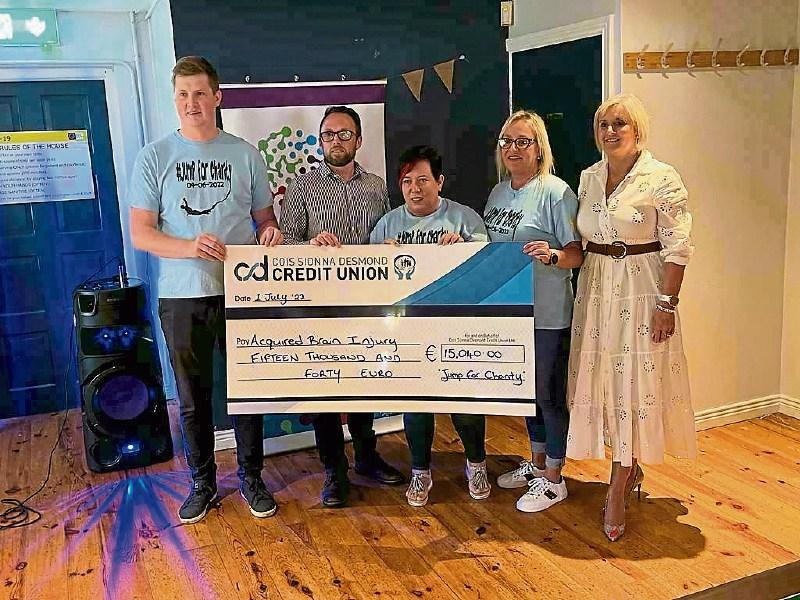 TWO charities have an extra bounce in their step thanks to Europe’s largest single-day charity bungee jump.

It was held in the Top of the Town pub car park in Askeaton last month – a perfect spot in case anyone needed a stiff drink after taking the plunge!

The event, helped by the participation of around 80 brave jumpers and lovely weather, proved an immense success.

“Initially, we weren’t even sure the jump was a good idea,” acknowledged Jessica Lawlor, committee member.

“But once it was out there, the whole lot just grew legs, and more legs. A few of us put a fair bit of work into it, in the run-in, and there was no shortage either of volunteers on the day.”

Josh Sheahan hosted the jump, which consisted of participants leaping 180 feet from a crane that towered over the town.

Each jumper committed to raising a minimum of €300 each, and most surpassed this target. The final amount collected was €30,000, and this was split between Limerick Treaty Suicide Prevention, and Acquired Brain Injury (ABI) Ireland, who have been presented with their cheques.

“This is a phenomenal amount for ourselves and no words of mine can truly thank the people of Askeaton for this contribution,” said Josephine Corbett of Treaty Suicide Prevention.

Alan O’Connell, ABI Ireland said: “Like Josephine, this sort of unknown funding at the start of the year is a very welcome boost for us, based in Limerick. We too thank the committee and participants for their generous support which will help continue our work.”