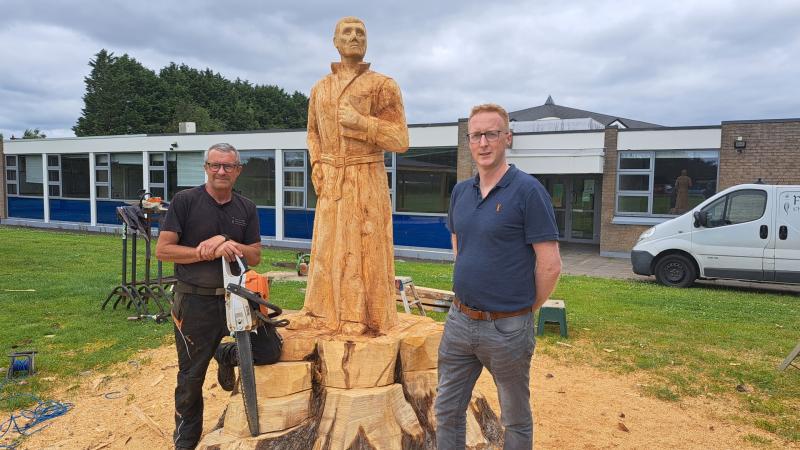 Pictured at the Ignatius 500 Sculpturer are Will Fogarty (Left) Chainsaw Sculptor and Brendan Iunn, teacher at Crescent College Comprehensive

A MAGNIFICENT wooden sculpture has been commissioned at the front of a Limerick school to celebrate Ignatius 500.

The sculpture, which is located at Crescent College Comprehensive in Dooradoyle, celebrates the 500th anniversary of the founder of the Jesuits, Ignatius Loyola's conversion to the church after his wounding due to a cannonball strike on the battlements in Pamplona, Spain in 1521.

In celebrating this anniversary school principal Diarmuid Mullins said that he hopes “this project will acknowledge the cannonball moment at which Ignatius changed the course of his life and also set about dramatic change with the formation of the Jesuits.”

Throughout the world there are around 800 schools set up by the Jesuits, Crescent College being one of them.

Limerick school gets go ahead for refurbishment and new science block

Brendan Iunn a teacher at Crescent College commented: “If not for Ignatius' cannonball moment, we wouldn't have hundreds of Jesuit schools, universities or organisations that all serve to make the world a greater place.”

The sculpture made out of a tree that stood in the same spot is the work of chainsaw sculptor Will Fogarty from Hospital, County Limerick.

The piece is part of a new development of the area at the front of the school which sees the old trees that once stood tall being reimagined as they must be removed for health and safety reasons.

“There will be a formal unveiling when the school community returns in late August and I’d like to acknowledge the support of the schools Past Pupils Union in supporting this project. This last sculpture will start a celebration of Crescents 50 years at its site in Dooradoyle,” Mr Mullins added.