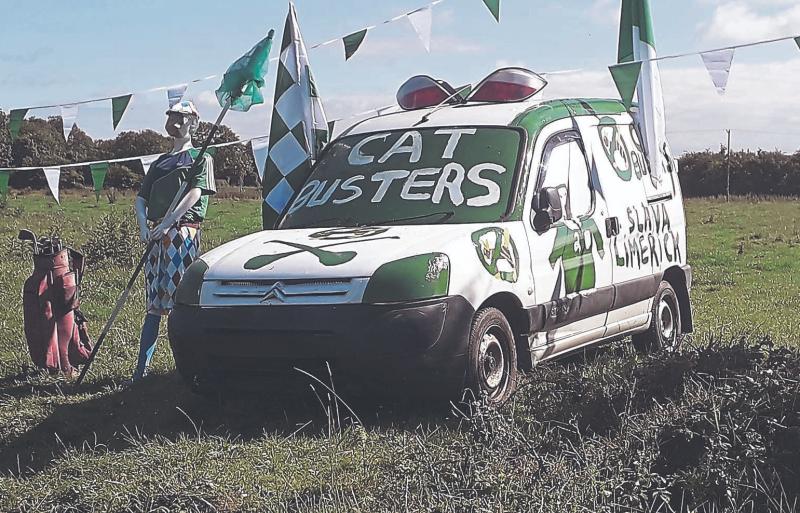 The Leonardo da Vinci of Limerick hurling Roger Mulqueen with his latest display in Bruff. He hopes Sean Finn et al are ‘Catbusters’ on Sunday

IF THERE’S something strange in your neighbourhood who you gonna call? Catbusters!

The pressure was on the Leonardo da Vinci of Limerick GAA to come with his latest creation to celebrate the boys in green and especially his own Bruff GAA clubman Sean Finn.

The dairy farmer started building his quirky installations in 2018 and has it kept going for every All-Ireland final since. Last year’s theme was “strawgate” and this year it’s Bill Murray.

“The idea came from my small nephew Cian Mulqueen. He was at the JP McManus Pro-Am and he got his picture taken with Bill Murray. I was trying to think of an idea and he suggested something along the lines of Ghostbusters so when we were playing Kilkenny I thought of Catbusters,” laughed Roger.

He was busy with his paint brush to cover over the red of Cork last year on the van. Slava Limerick written on the side of the vehicle is a nod to Dimitri who is half Ukrainian and Italian.

Roger borrowed the mannequin from Raspberry Red in Bruff and put a Bill Murray mask on it. The snazzy shorts are most definitely not from the boutique!

“I went to a golf classic last year. My cousin’s husband organised it. He said don’t make a show of us and I said no problem at all. That’s one of the outfits myself and a friend wore to it – the shorts are like something John Daly would wear!

“We had a bit of craic at it. The golf clubs are my own. They’re worth about 50 pence!” smiled Roger.

As always his handiwork has gone down a storm.

“People are beeping their horns. We had a family here on Saturday out taking photos,” said Roger.

Despite his Catbusters moniker he says Kilkenny are anything but a busted flush.

“I’d be worried. Kilkenny are Kilkenny in finals – that’s they way I put it. Look at Brian Cody’s record of 11 All-Irelands as manager. They caught us on the hop in 2019. There was Darragh O’Donvan’s sideline and the 65 that wasn’t a 65.

“We’re waiting for that since so there is a small bit of a revenge aspect to it but we have to concentrate on ourselves. If the boys play well we should be winning hopefully,” said Roger.

Let’s hope the ghosts of the All-Ireland semi-final in 2019 are vanquished on Sunday!