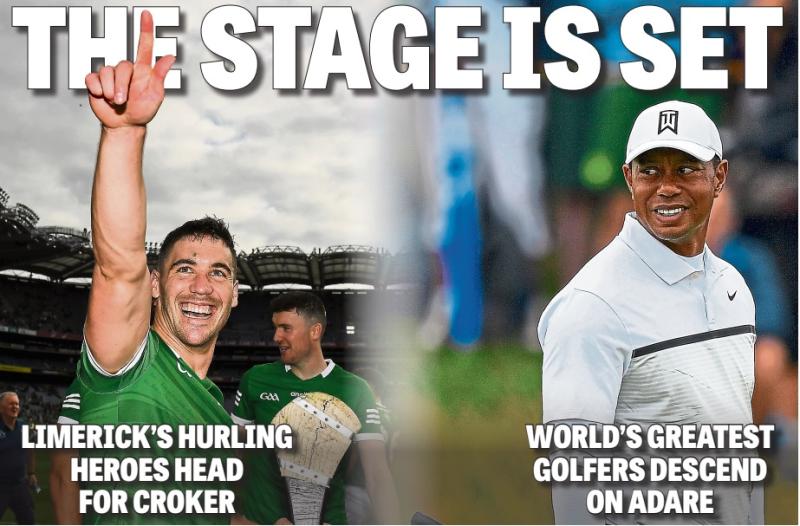 THE STAGE is set for one of the biggest weeks in Limerick’s sporting history.

Sports fans, particularly those with a penchant for the stick and small ball, be it hurling or golf , will be in seventh heaven over the next seven days. For not alone are our local hurling heroes - the Limerick senior hurlers - contesting the All-Ireland semi-final in Croke Park on Sunday, but, over the following two days, the top 10 golfers on the planet will showcase their talent on County Limerick soil.

“We’re privileged to be joined by the world’s greatest golfers, those who have achieved so much in their careers, and some incredible personalities to augment the occasion. Let’s hope for a bit of sunshine to really make what we expect to be a very special couple of days in Limerick,” said tournament host, JP McManus, ahead of the 2022 JP McManus Pro-Am which takes place at Adare Manor on Monday and Tuesday.

The sold-out event is being broadcast live on Sky Sports, and The Golf Channel in the USA.

Are you heading to the @JPProAm next week? If so, make sure to check out our special preview in this week's Limerick Leader newspaper On sale now for just €3 - in shops and online at https://t.co/C5sc7CF4OI pic.twitter.com/ZyheIg9j5O

The current holders of the four Major championships – Matt Fitzpatrick, Scottie Scheffler, Justin Thomas and Collin Morikawa are lining up alongside the likes of 15-time Major champion Tiger Woods.

Among the celebrities set to tee it up at the Manor next week are friend of Limerick, actor Bill Murray, singer Niall Horan and Hollywood stars Mark Wahlberg and Jamie Dornan.

Limerick hurling fans - including hurling sponsor JP McManus - will be hoping that the big event is preceded by a victory in Croke Park for the senior hurlers on Sunday.

John Kiely’s men take on Galway in GAA headquarters at 3.30pm and Limerick has received a welcome boost with the news that 2021 Hurler of the Year, Cian Lynch, has returned to training after being out of action for almost 10 weeks due to a hamstring injury.