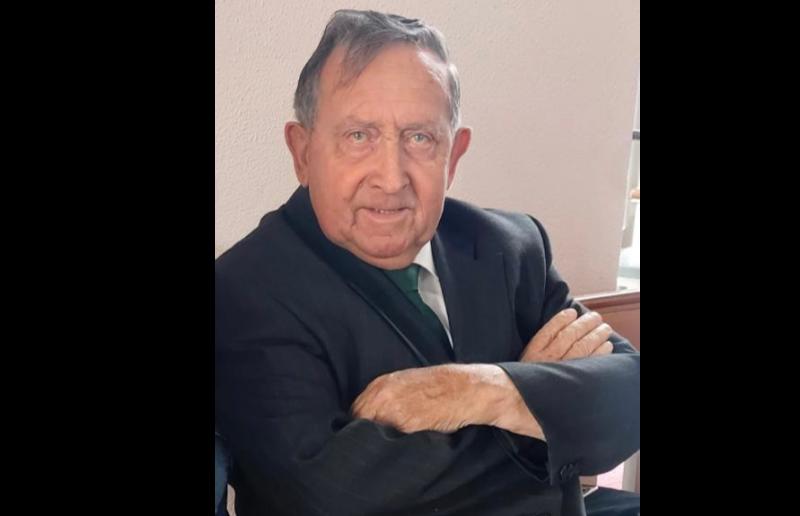 The late Billy 'Hal' Mulcahy 'was known far and wide'

“TODAY we bid farewell to Billy ‘Hal’ Mulcahy, a name that will live long in the annals of folklore in Kilmallock”.

These were the words of Canon Willie Fitzmaurice, the chief celebrant this Sunday afternoon at the funeral Mass of “one of the more colourful and legendary characters in Kilmallock”.

“A man for all seasons who embodied the true sense of Kilmallock”, Billy ‘Hal’ Mulcahy of Ashill, Kilmallock, passed away peacefully at University Hospital, Limerick last Wednesday. He was 82.

A former mayor of Kilmallock, Billy was involved in almost every club or organisation ever founded in the town and district, apart from, maybe, The Flower Club.

“Hal was a community activist who contributed so much to the life of the community,” said Canon Fitzmaurice, the parish priest of Croom who concelebratred the Mass with Fr Chris O'Donnell and Fr David Casey, both of Kilmallock parish.

“Kilmallock GAA club is synonymous with his life,” Canon Fitzmaurice continued, “he was involved in festivals and the community council. He was never afraid of any challenge. He commentated on the various video transmissions of important GAA games, the video of which would be shown again that night in the local pubs.”

When he returned to Kilmallock after working for a time in Brentford, north of London, Billy became affectionately known as ‘The Hal’.

“In those times he had an uncanny resemblance to the comedian Hal Roche,” Canon Fitzmaurice recalled, “and the story goes that while he was walking along the street in Brentford, he overheard two ladies behind him remarking that Hal Roche was in front of them and Billy turned around and complimented them for recognising him. The nickname has stuck with him ever since.”

When Billy came back to Ireland and took up the position of postman, he became rooted in community life.

His son Liam recalled how his father was a man who loved people and a man people loved.

“He took control of a room the minute he walked in,” Liam said, reflecting on his father.

“Dad was the only man that Michael Daffy (undertaker) went to the Regional for and brought him home alive,” he smiled, referring to Billy’s two near death experiences.

Billy was the MC of the Kilmallock St Patrick's Day parades. He had many associations with many local groups, not least the local undertaking business, with Todd and Denis Quish, and then with Michael Daffy.

“Dad wanted Kilmallock to be the best at everything - festivals, bingo, Saint Patrick’s Day, Tidy Towns, mayoral elections, Kilmallock Athletics Club, An Post, we could go on forever,” said Liam.

“He put himself in the heart of it. His love for the GAA was evident. Kilmallock GAA was something special. There was never a Kilmallock man who once had a bad game in a Limerick jersey and that was evident with Graeme Mulcahy and 'Shaughs' (Andrew O’Shaughnessy) who were his idols.

It is with great sadness Kilmallock Gaa heard the sad news this week that the great Billy Hal Mulcahy had passed away . Billy was a true Gael and his dedication to the Club lasted a life time .He was the longest serving committee member in the club. https://t.co/s0Naqe4Soc pic.twitter.com/I9BSjInAKH

“His commentary of the game, the passion in his voice. He was always glad to go to Bulgaden to let any Stakers supporters know the news of Kimallock’s success.”

Billy also has a fierce interest in coursing.

“The coursing club and the dogs were also a big passion of his,” said Liam, "he loved the commentary and his own dogs running in the 1983 Mount Coote Cup and then recently in 2011 with Hal’s Back, aptly named.

A number of family members brought an array of gifts to the altar which summed up Billy’s rich life succinctly. Billy’s daughter-in-law Stacey brought  to the altar an imitation glass of Guinness.

“Billy always felt at home with a Guinness which led to a lot of good social interaction,” said Canon Fitzmaurice.

His granddaughter Kayla carried a Kilmallock jersey and a sliotar.

Granddaughter Caoimhe carried Billy’s An Post jumper - he has spent 26 years working with An Post in Kilmallock. Another granddaughter Amy brought up a coursing card symbolising Billy’s love of coursing and greyhounds.

Prayers were also offered up for Billy’s beloved granddaughter Sophie Mulcahy who sadly passed away in 2014.

Community, and, in particular, family was at the heart of everything Billy ‘Hal’ Mulcahy did.

He will be greatly missed by his wife Bridie, daughter Elaine (Dore), sons John and Liam, his grandchildren “whom he cherished, his extended family, his host of friends and those at Bulgaden who he regarded as his second home,” said Canon Fitzmaurice.

Son Liam paid particular tribute to his beloved mother Bridie whom Billy wed on October 8, 1966. Bridie and Billy “had many great times together”.

“Behind every good man is an incredible woman and, by God, we have one,” said Liam, fighting back the tears.

“Mam has been incredible to Dad and we know we had him for a lot longer because of you Mam. You were his rock.”

Billy’s granddaughter Caoimhe in her reflection piece said he was “just the best”.

“Billy,” she said, “I could go on all day about how much love and admiration I have for you but I’ll keep it short and sweet, just like you! Goodnight Bill, love always.”

As The Parting Glass rang out across Saints Peter and Paul’s Church in Kilmallock, hundreds of people filed past the coffin of the Kilmallock legend which was adorned with a Kilmallock GAA jersey.

As the funeral cortege made its way down Sarsfield Street to Billy’s final resting place, the local cemetery, many a good story was told in hushed tones about a man who “burned the candle at both ends and always remained a light for his family and many more in the community,” Billy ‘Hal’ Mulcahy.