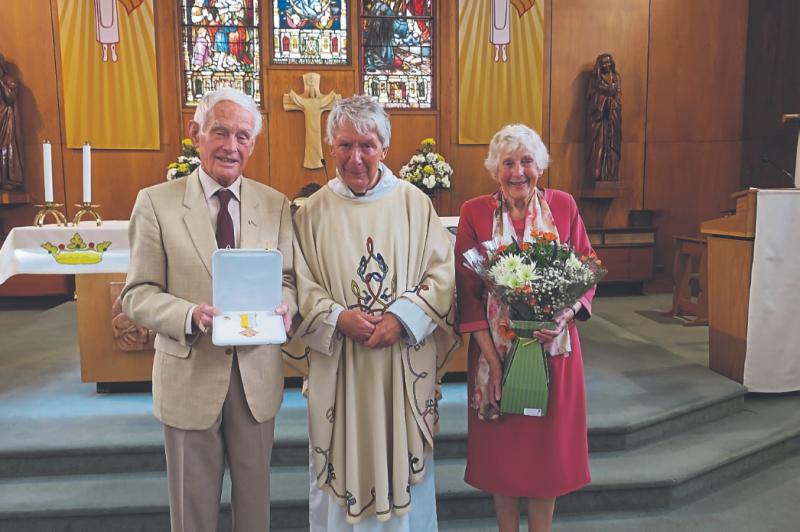 ONE OF THE highlights of former superintendent, Gerry Higgins’ career was playing a key role in organising the visit of His Holiness Pope John Paul II to Greenpark Racecourse in 1979.

Fast forward to 2022 and Mr Higgins has got another papal honour. He is a recipient of the Benemerenti Medal which is awarded by the Pope to members of the clergy and laity for service to the Catholic Church.

Fr Des McAuliffe, parish priest of Holy Rosary Church, Ennis Road, Limerick, presented the medal to Mr Higgins in recognition of the outstanding voluntary work he has done in the parish over many years.

Coincidentally, the date of the presentation this month was also his 89th birthday.

Over the years he has been a Eucharistic Minister, Mass reader, envelope distributor, visitor to the sick and much more done quietly in the background. He has completed St Patrick’s purgatory pilgrimage on Lough Derg, Co Donegal, 59 times.

Mr Higgins’ strong Catholic faith and work ethic was imbued in him as a boy growing up in Leitrim in the 1940s by his mother Ellen. Following his father John Joe’s death at a young age, Mr Higgins had to grow up fast and took on the responsibility of many farm and household tasks.

After he joined the guards his first posting was to Pallasgreen. He met his future wife Mary Alice Lambe while he was on border duty in Monaghan.

Last August, they celebrated their 60th wedding anniversary with a Mass in the presence of family and parish friends. The couple had two sons – Declan and Gerald.

Mr Higgins returned to Limerick from Monaghan and was stationed in Adare, Askeaton and the old William Street garda barracks. As his career progressed he served mostly in Henry Street, interspersed with postings in Phoneix Park and Templemore.

After 37 years service – mainly to the people of Limerick city and county – Mr Higgins retired in 1993 at the rank of superintendent.