Limerick broadcaster explores the ‘other side’ in new book 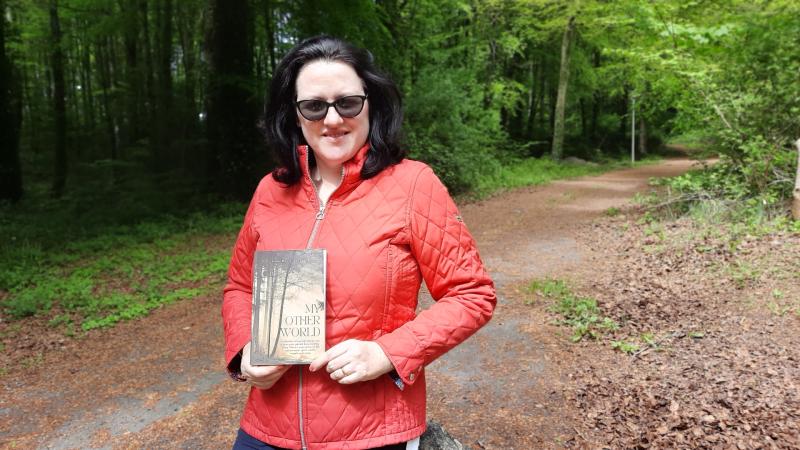 Anne Marie Geraghty pictured with her book 'My Other World'

A NEW book by a Limerick broadcaster takes readers on a journey into the spiritual world and beyond.

Anne Marie Geraghty’s voice will be known by many who listen to Limerick radio station Live 95, but listeners will learn even more about her thanks to her book, My Other World.

The veteran journalist kept her experiences of premonitions and the spirit world under wraps for many years, but now she feels ready to share her stories with the world.

The book is made up of a selection of journal entries over a four year period as Anne Marie learns more about herself and the complexities of the paranormal.

Anne Marie is originally from Athlone, however, she has lived in Limerick for over 20 years and now resides here with her family.

The mother-of-two spoke to Limerick Live about how her connection to the spiritual world began when she was a child.

“In primary school I started having dreams at night and then the next day the dreams would play out.

“It would be very simple things. Something would happen in the schoolyard and it was like a deja vu moment, except I would know what was going to happen next. I was living what I had already seen in my sleep.

“As I got older it became more about feeling and sensing things, it was only when I was in my late teens that I started seeing things.

“It was like I was only being shown a certain amount and everything gradually opened up to me the older I got.”

What started with dreams developed into Anne Marie seeing mists and sparks as well as figures and receiving messages about why things were happening in her life.

“Close friends and some family know most of what is in the book. If I sense someone is skeptical or afraid then I won't have the conversation but if I meet a like minded soul then I will.

“I have been blown away by the reaction to the book so far, there have been strangers who have gotten in touch and telling me their own stories.”

While she has become more comfortable with situations over the years, Anne Marie says some of her experiences can be overwhelming at times.

“In my early 20s I had a dream in which I saw a man I hadn't seen in years take his own life, in detail.

“A few weeks after I had the dream, he took his own life. I found that really hard to deal with. I just thought ‘How do you explain this?’.

“That kind of started me on a journey then. I have got to the point now where I am no longer afraid and that is why I have written the book.

“I know how to deal with things now. It was really difficult at times when something serious like that would happen, it would rock me,” she pointed out.

The book documents a four year period in Anne Marie's life where she says there was “a lot going on” including the birth of her two daughters.

However, Anne Marie says the book is mostly about her own experiences and details her own journey.

Anne Marie’s book, My Other World, is available now on Amazon.