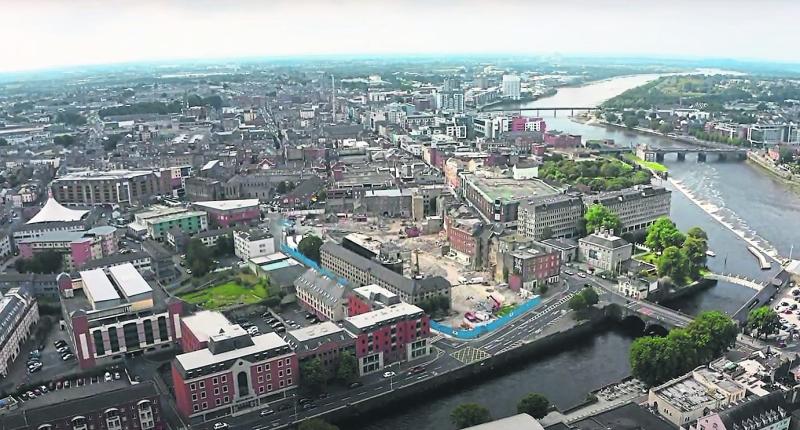 CONSTRUCTION work on one of the key buildings in the new €200m Opera Site development is scheduled to get under way in the early autumn.

It comes with the demolition of a number of buildings at the Patrick Street site and the resultant clearance and enabling works now reaching their conclusion.

At this month’s metropolitan district meeting, Labour councillor Joe Leddin sought an update on the completion time of the clearance at the site, and ultimately, what is the timeframe for completion.

In a written response, David Conway, the chief executive of Limerick Twenty Thirty, the development vehicle which is charged with advancing the scheme in the heart of the city, revealed that the anchor building, One Opera Square, will kick off works this August.

“One Opera Square is a grade A office which will have the capacity to accommodate up to 1,000 workers. The design is to a world -class standard, incorporating the environmental accreditation, LEED platinum, and wellness accreditation Well platinum,” Mr Conway stated.

Cushman and Wakefield has been appointed as letting agents to market this property both nationally and internationally in advance and during construction, Mr Conway added.

Mr Conway has previously called the Opera Site a “gamechanger” for the city, and in a prospectus to potential tenants, he stated that the Twenty Thirty-led development is taking “a problem site from the financial collapse of the noughties” and turning it into “the singularly new largest transformational commercial property project undertaken in Limerick city centre and outside the capital.”

Ultimately, he added, the development will be capable of employing up to 3,000 people across a 450,000 square foot campus accommodation.

There was a sense of nostalgia in December when the Trinity Rooms was demolished to make way for the new development.

It’s now been 11 years since the council bought the land – which was once destined to be a shopping centre, and home to Marks & Spencer.

But the continued economic slowdown in the early part of the last decade, and delays brought about at the start of this decade by the Covid-19 have delayed construction.

Still, however, it’s hoped it will be complete and ready for occupation by 2026.

As well as One Opera Square, there will also be a new 14-storey tower, which will be home to Revenue Commissioners staff, who will move across from Sarsfield House, with that building slated for demolition.

One of the historic buildings which has survived on site is the existing Town Hall. This, alongside eight and nine Rutland Street will be transformed into a new city library on all floors, and a food hall and grand cafe at ground level.

The Granary building will be refurbished in a move which will bring a restaurant on the lower ground floor.

The focal point of the huge project will be a city square, to be known as Opera Square.