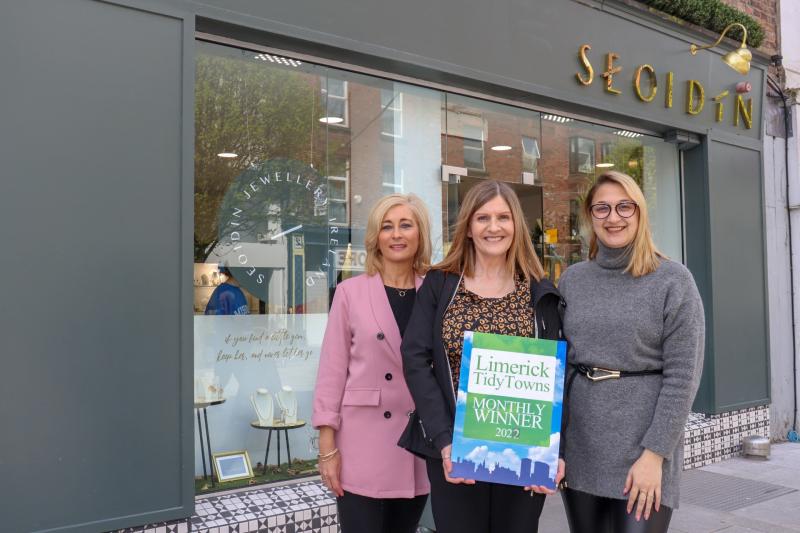 A LIMERICK jeweller is sparkling this month after being recognised for the look of its shop.

Seoidín, which is based at 54 Thomas Street, has won the Limerick City Tidy Towns award for April, with volunteers praising its appearance.

Maura O'Neill of the group said: "The pedestrianised section of Thomas Street has been undergoing a substantial makeover in recent years with freshly laid street paving and newly opened coffee shops bringing increased footfall in this area of the city. For this reason, it is great to see such an attractive shop as Seoidin in such a prominent location in the heart of the retail sector."

"With its contemporary grey paintwork, gold signage and beautiful window displays, the shop is always presented immaculately with pristine windows and outside planting, and we are delighted to recognise this with one of our monthly awards," she added.

Seoidín was founded by Maureen Harrison in the West of Ireland in 1996, with its first opening in Ennis.

Its shop in Limerick followed in November 2012 - meaning this winter, it will mark a decade in business in the city.

It specialises in bespoke, one-of-a-kind pieces, designed and inspired by the beauty of Ireland, its people and its heritage.

On offer are rings, bracelets, bangles, pendants, earrings and more.

Seoidín Jewellers becomes Limerick City Tidy Towns’ third monthly award for 2022, and as a result will be in with the chance of winning this year’s overall prize at their annual event to be held early in 2023.

The winners from January and February 2020 will also be included in the overall event, due to the scheme being halted for two years due to the Covid-19 pandemic.

They will join Treaty City Brewery and Khan Supermarket which won the February and March 2022 awards.

If you wish to volunteer with Limerick City Tidy Towns, volunteers meet every Sunday morning at 11am at the corner of Thomas Street and O’Connell Street, and on Wednesday evenings at 6pm outside the White House.