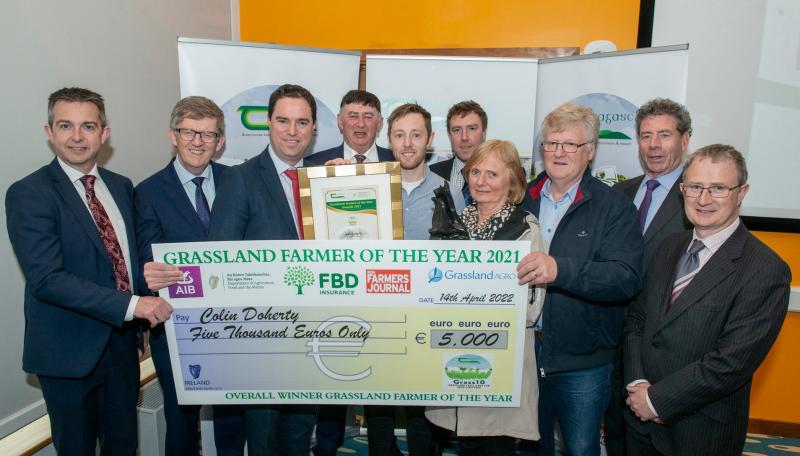 MANY farmers are 'green' with envy at Colin Doherty, who was named Grassland Farmer of the Year 2021 this Thursday.

Colin, from Adare, received the prestigious award at a ceremony in Moorepark, County Cork. He also claimed the dairy enterprise award.

Colin's success means that County Limerick is now home to the Grassland Farmer of the Year and the reigning NDC and Kerrygold Quality Milk Awards - Michael, Mary Ita and Alex McCarthy, Feenagh.

Congratulations to Colin Doherty from Adare, Co Limerick who is the Overall Winner of the Grassland Farmer of the Year 2021 @TeagascGrass10 @colindgraigue pic.twitter.com/dGDUyEJk2q

Now in its fifth year, the awards recognise and reward the top grassland farmers in the country who are growing and utilising more grass on their farms in a sustainable manner.

Colin and his father Bryan aim to produce 1kg milk solids for every 1kg of cow liveweight and feed approximately 500kg meal per cow. Clover is a major focus on the farm to reduce requirement for chemical N and maintain grass growth.

Minister of State at the Department of Agriculture, Martin Heydon congratulated all of the 10 finalists on their achievements in grassland management.

"As finalists you are joining a group of top class grassland farmers, and I would particularly like to congratulate Colin Doherty on winning the overall Grassland Farmer of the Year Award. It’s an achievement you can be really proud of.

"It is clear that initiatives such as Grass10 and the Grassland Farmer of the Year are to the fore in helping farmers achieve the most they can from the natural resource they have on their farm, which is grass," said Mr Heydon.

The Grassland Farmer of the Year awards are part of the Teagasc Grass10 campaign which is supported by the Department of Agriculture, Food and the Marine, Teagasc, AIB, FBD Insurance, Grassland Agro and the Irish Farmers Journal. The first year of Phase II of the programme has been completed with a continued focus on improving nutrient management and efficiency on farm and clover incorporation.

Limerick can also boast of a former winner in John Macnamara, Knockainey, in 2018 and numerous category winners.

As well as being an expert in growing grass in the superb land of Adare, Colin also knows a thing or two about it baling it in more challenging pastures.

Last month, he took over the @IrelandsFarmers Twitter account and gave excellent insight into his daily life on a dairy farm.

Slight grass frost this morning, my fingers are cold pic.twitter.com/1VnKT2Fcnx