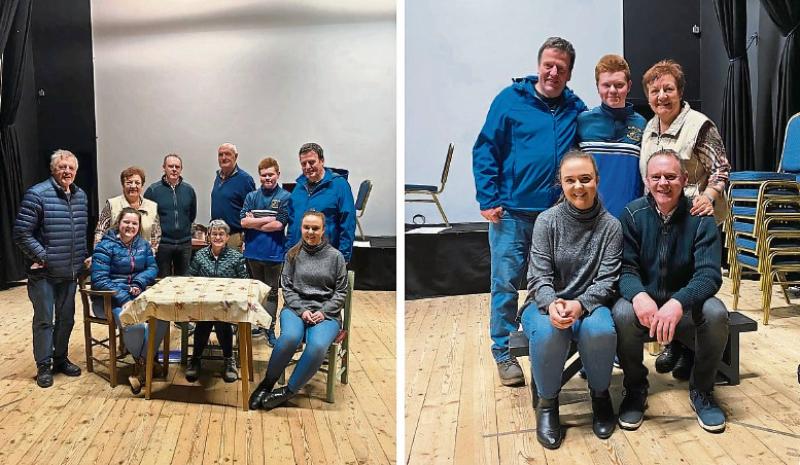 Glad to be back: Members of the Abbeyside Players rehearsing recently

THE ABBEYSIDE Players are back treading the boards after a gap of three years and large and enthusiastic audiences are expected to be thronging the Glórach Theatre in Abbeyfeale to sate their hunger for drama.

The Righteous are Bold, by Frank Carney, will open on Thursday, March 31 and continues a long-standing tradition in Abbeyfeale of staging plays during Lent.

The play has been described as a “a taut, psychological thriller, with a very moving and powerful ending” by Abbeyside director Merce Hobson for whom The Righteous are Bold will be her third production at Glórach.

And the cast is a mix of seasoned hands with two members, Lucy Collins and Liam Broderick, making their stage debut. Therese Prenderville plays Nora, around whom the play turns and she is joined by Tom Madigan, Toddy McMahon, Denis Hobson, Dan Moloney, Angeline O’Donnell, Caroline Collins and Marian Harnett.

The main action in the play takes place in the kitchen of the Geraty household, a poor farmstead at the foot of Croagh Patrick, where the family are looking forward to the return of their daughter Nora from England.

Not all is well however with Nora, who appears to be carrying both physical and psychological scars that mystify her family and the local doctor, but not the local priest, Fr. O'Malley, who believes deeper and darker forces are at work from her time across the water.

The play deals with many of life’s big issues, poverty, religion and the battle between good and evil.

The Righteous are Bold holds the record for most consecutive performances at the Abbey Theatre, and has been performed twice in Abbeyfeale in the last 30 years. At present, Glórach Theatre is anticipating a seven-night run, running from Thursday, March, 31 to Sunday, April 3 and again the following weekend from Thursday, April 7 to Saturday, April 9.

To ensure your slice of drama, book your seat at 0871383940.The play is not suitable for children under 12 and the curtain rises at 8pm each night.