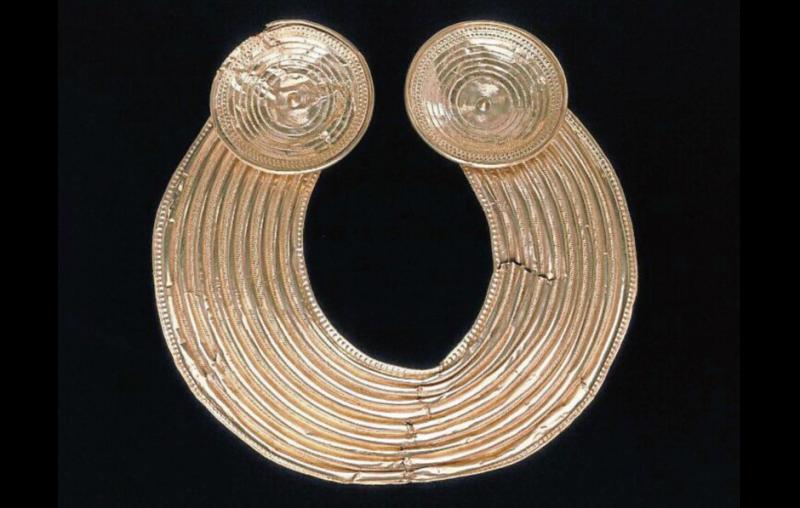 EFFORTS are to be made to repatriate a Bronze Age collar which was ‘seconded’ to England after it was discovered in County Limerick more than 200 years ago.

The Shannongrove Collar, which was discovered in a bog near Pallaskenry is currently on display at the Victoria & Albert Museum in London.

According to the museum, the collar, which is made from gold, dates back to sometime between 800 BC and 700 BC.

“This is very much a distinctive collar – very much like the Tara Brooch,” said Cllr Emmett O’Brien at a meeting of Adare/Rathkeale councillors.

“It’s a very beautiful artifact with high-skilled quality workmanship from the best part of four or five thousand years ago,” he added as he outlined why he thinks the collar should be brought back to Limerick – even temporarily.

“What I am suggesting is that we enter into negotiations, perhaps through Matthew Potter (Curator of Limerick Museum) or the Hunt Museum, with a view to having the collar leased back to us for a period of time or brought back on loan,” he proposed.

“It would be nice to have something that is distinctly Limerick and distinctly Adare/Rathkeale and distinctly Pallaskenry –  or Ardkenny as it was formally known –  brought back to Limerick,” he added.

The motion was agreed unanimously by councillors and it will now come before a meeting of the full council for further consideration.