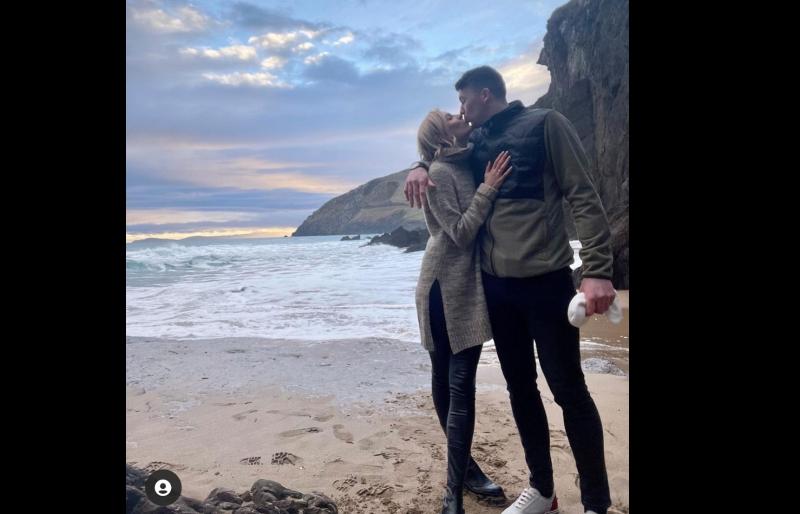 THERE was an “extra sparkly sunrise” over Kerry’s Slea Head Drive this Monday morning when Limerick hurling captain Declan Hannon popped the question to the love of his life, presenter Louise Cantillon.

The Adare man chose a place close to Louise’s heart - West Kerry - to ask her to be his wife. Louise’s parents are both from Kerry and she spent many weekends in The Kingdom as a child with her three sisters.

“Extra sparkly sunrise ar Chom Dhíneol ar maidin,” posted the Gaeilgeoir to her Instagram page this Monday where she shared three pictures from the romantic proposal. The first, of course, was All Star hurler Declan kissing his fiancee on Chom Dhíneol beach. This was followed by a short video of the waves crashing off the Dingle Peninsula. And, finally, was the picture of the beautiful sparkler.

The couple who met in secondary school started going out when they were just 18 years old.

Their initial meeting came at Insomnia, a teenage disco in Garryowen Rugby Club, when they were 15 and 16.

Declan, who captained Limerick to the All-Ireland hurling titles in 2018, 2020 and 2021 won his second All Star award earlier this month. He studied at Ardscoil Rís secondary school before attending Mary Immaculate College - both in Limerick city - and now works in the area of recruitment.

Louise, meanwhile, is steadily building a successful career in media. A presenter with Spin South West, she is also a Limerick Leader columnist and host of TG4’s Junior Eurovision Song Contest. Louise also qualified as a teacher of Irish and PE. As a child, she attended the summer schools in Irish organised by her mother Catherine Cantillon in Kilcornan where Louise grew up. And her education at Laurel Hill Coláiste in Limerick city was all in Irish.

Messages of congratulations have been pouring in for the popular couple since the proposal was announced.

Louise and Declan are planning to build a house together in Adare. They are currently living in Limerick city centre.