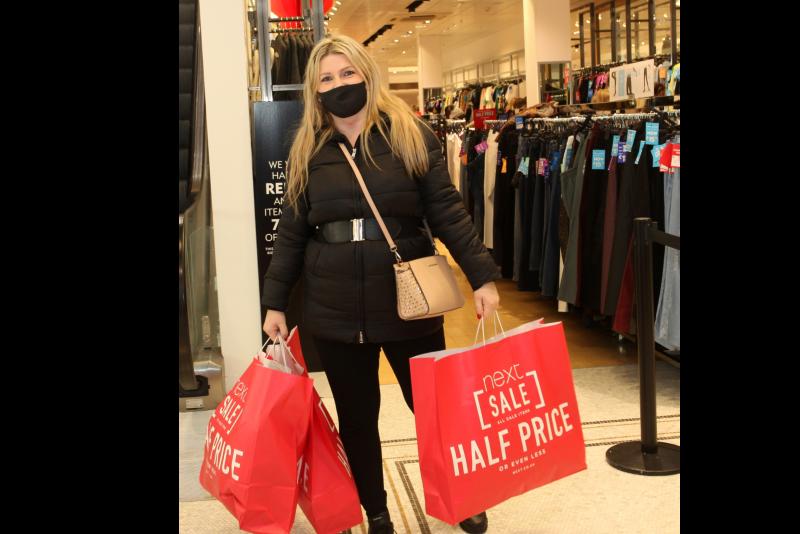 Maria Idziak, Dooradoyle after grabbing some bargains in Next in the Crescent Shopping Centre this St Stephen's Day Picture: Brendan Gleeson

PANDEMIC or no pandemic Limerick shoppers rose from their beds early this St Stephen’s Day morning with one thing on their minds -  to bag a bargain, or two!

Rebecca O’Brien, assistant store manager at Next in the Crescent Shopping Centre pulled up in the car park to discover a fine snaking queue had formed under the cover of darkness.

“We had about 80 people in the queue. We were busy enough. We opened the store at 7am and I arrived at work at six o’clock and they were already there,” she explained.

The early bird...Limerick shoppers were out of the bed at the crack of dawn this St Stephen's Day to bag a bargain, or two!

While there are discounts to be had across all the departments, once again there is one area doing better than the rest. Anyone who has been to the St Stephen’s Day early-morning sales at Next, will be familiar with scenes of parents filling big sacks with clothes for their children.

“There is good value - it’s 50% or more off. The kids department is the most popular - the parents buy a lot of stuff for the kids for the year,” Rebecca said.

With St Stephen’s Day falling on a Sunday this year, a number of Limerick stores remain closed until tomorrow, Monday, although in some cases sales have begun online.

The online discounts will of course appeal to those who have unexpectedly found themselves isolating alone due to the Omicron variant.