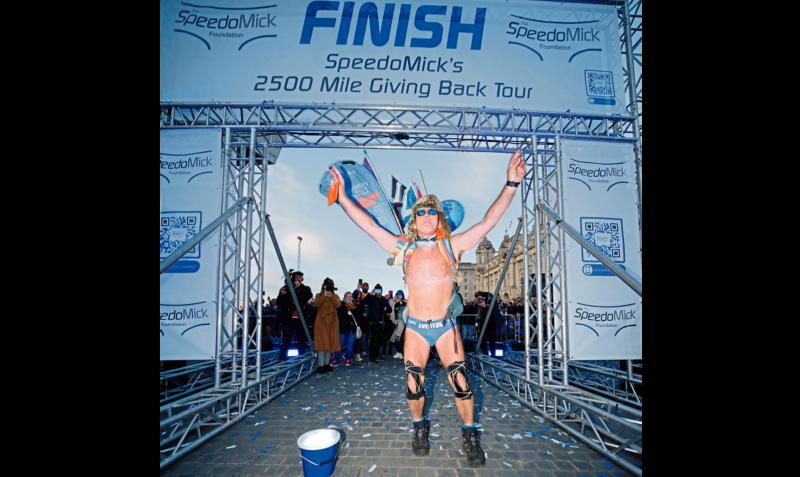 Home: SpeedoMick arrived back in Liverpool

A FUNDRAISER who walked 2,500 miles wearing a pair of Speedos said he was ready to “lie down for about three months” as he was welcomed home.

Everton fan Michael Cullen, now more commonly known as Speedo Mick, celebrating his 57th birthday on Friday by crossing a finish line at Liverpool’s Pier Head at the end of his Giving Back Tour, which has seen him walk across Britain and Ireland in snow, wind and rain, wearing only his swimming trunks.

It was back in July when SpeedoMick rolled into Limerick, an easy man to spot on the streets of Limerick, dressed in his dark blue Everton swimming trunks, swimming cap and walking boots.

The Irish leg of his tour was split into nine journeys – the sixth covered Galway to Limerick, stopping at Kinvarra and Cratloe, and in the city centre, where he stayed at the invitation of the Savoy Hotel.

While in the region, he met Clare TD Cathal Crowe, and a number of other local fans.

Upon his return to Merseyside, where he was greeted by former Everton player Ian Snodin and cheering supporters, he said: “I honestly don’t think I’d have been able to carry on much longer.

“My body’s just saying ‘go and have a lie down for about three months’.

“All the encouragement and the support I have received along the way has been carrying me on because I think I would have gone home about three months ago, I was knackered after the first month of walking.”

Mr Cullen said the support he received along the way had been “phenomenal”.

He added: “I was amazed that a lot of people, even in the Outer Hebrides, have heard about my exploits in my knickers!”

Speaking of his own struggles with mental health, the fundraiser said: “This is amazing for me because I’m always intrinsically linked to the lost soul I was over 19 years ago.

“That feeling is always there with me so I stay grateful for my life.

He said he would be spending Christmas with his family, including his wife and grandchildren who he had been apart from while on his travels.

Mr Cullen said he had no plans for further challenges in the future and hoped to focus on setting up projects with the SpeedoMick Foundation, but added: “You never know, because the knickers call me.”