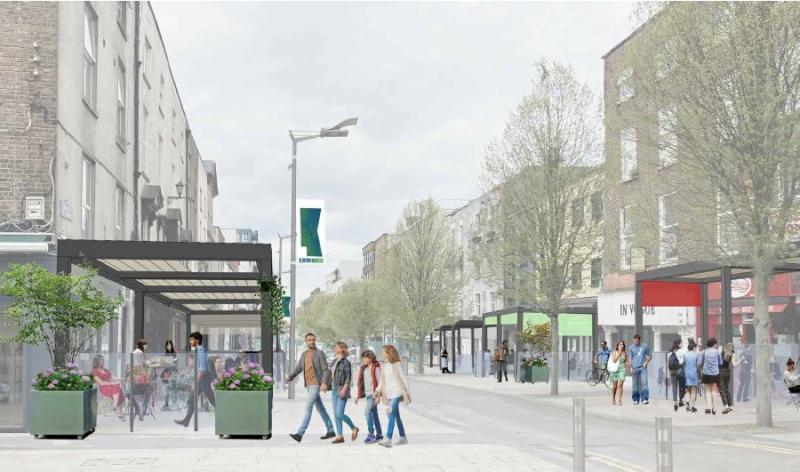 The new Limerick City ‘Outdoor Dining Experience’ project was voted through by members of the metropolitan district at their monthly meeting this morning.

Set for Bedford Row and Thomas Street, the local authority has promised “far-reaching” proposals, which will help by “encouraging life back into the principal retail streets” of the city centre.

The proposed works will see the installation of covered pergola structures with retractable roofs and toughened glass screens. These will create outdoor areas for dining.

On top of this, additional lighting, planting and street furniture is planned, with water bottle refill stations.

In another departure, so-called ‘smart bollards’ will be installed, which will include WI-fi, digital pedestrian and traffic management information, and environmental sensors. Solar powered compacting bins are planned.

Since it is a public project, it is the role of members to approve it, with Fine Gael councillor Sarah Kiely proposing it and her colleague Olivia O'Sullivan seconding.

Independent councillor Elisa O'Donovan said she does not feel like the local authority has properly consulted on this project.

"I don't think I can currently support this," she said, expressing concerns over funding, accessibility, the maintenance of the structures, the materials planned for them, saying "They are not in keeping with the area."

"This part eight seems to be focused on taking away our public space and re-allocating it to 15 businesses within the city, two of which are vacant at the moment," she told the meeting.

Mayor Daniel Butler, and Cllr Kiely spoke in favour of the project, with the first citizen describing it as a "fantastic news story" for the city.

Labour councillor Joe Leddin said: "It's disappointing for certain elected members, including Cllr O'Donovan, who portrays herself as so passionate about the city and how we should do this, that and the other for the city, that she would question a massive project like this."

Councillor Jerry O'Dea, Fianna Fail, said: "I see nothing wrong in supporting businesses that are employing people, paying rates and creating a life in Limerick to attract people into the city. Limerick can be a great venue and a place to go, but we need to support the businesses and I see no reason why we should not."

Despite Cllr O'Donovan's opposition, the part eight was passed by all other members present at the meeting.

In a briefing document, council listed what it feels are a number of benefits.

These include “facilitating year-round outdoor dining for the benefit of promoting tourism while meeting the needs of all its citizens.”

“The proposed project maximises the opportunity to strengthen the cultural identity of the city centre by building upon the attraction of the pedestrianised streets and creating a sense of place focused around local tourism and hospitality businesses,” it adds.

Council has highlighted at least 12 businesses which will benefit from the project, located in the two pedestrianised streets.

“Delivery of the outdoor dining experience project will complement the place-making objectives of national, regional and local planning policy by encouraging a more comfortable and appealing city centre,” it added.