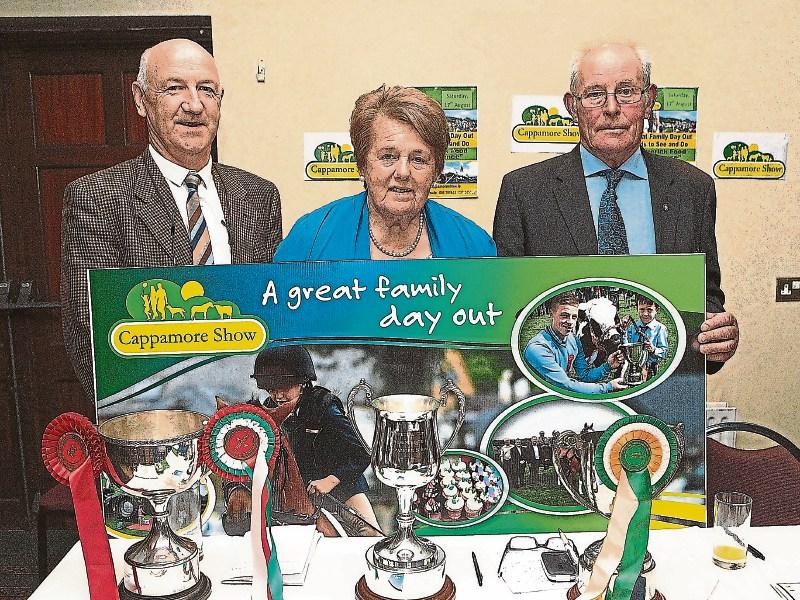 Paddy Ryan (Luke) at the launch of what would sadly be his last Cappamore Show in 2019 with PJ Blackwell, treasurer, and Marie Hayes, chairperson | PICTURE: Dave Gaynor

The Cappamore Show, due to take place this Saturday, is missing from the calendar this year. But missing from our lives every day is its legendary long-serving secretary Paddy Ryan (Luke) who passed away in June. To mark what should be the show date, the Leader asked the show committee to share their memories of Paddy. The result is this beautiful tribute...

THE late Paddy Ryan’s name is synonymous with the parish of Cappamore. He was the consummate community person being involved with and interested in every aspect of community life. His whole life has been dedicated to his family and to his community.

He has had a long and distinguished history of campaigning and indeed protesting when he felt the rights and entitlements of rural Ireland and its people were being ignored or neglected.

This part of Paddy’s personality can be traced back to the 1950s when he returned from Pallaskenry Agricultural College to run the family farm in Cappanuke. Straight away he joined the local branch of Macra na Feirme and in 1959 he was part of the Macra team, along with Willie Hickey, Pa Gleeson and Pat Duggan, who won the All Ireland Public Speaking competition. He held many officerships in Macra locally as well as being elected Limerick County President.

Paddy was a committed member of the National/Irish Farmers’ Association (NFA/IFA) and again held many roles in this organisation. He was a strong advocate for farmers’ rights. He partook in the famous Farmers’ March to Dublin under the leadership of Rickard Deasy in 1966 and also in the Farmers’ Blockade of the Dublin Road.

These protests strove to bring farmers’ plight to public attention. He was a key driver in the campaign to have John Dillon elected IFA president. Paddy was recognised for his immense contribution when he was awarded the Paddy Fitzgerald Memorial Award for his outstanding work for the IFA and for his local community. 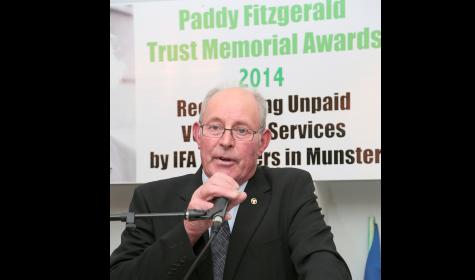 Among some of the other organisations that Paddy was involved with were: Cappamore Community Association; Glenstal Group Water Scheme; Ballinure Graveyard Committee and Mulcair Flood Relief Scheme.

He showed no sign of hanging up his protest boots and was to the forefront in organising protests at the closure of the local Dairygold Superstore as late as last year. The subsequent closure of this facility was a great disappointment to him. He saw it as yet one more nail in the coffin of rural life, an issue which was very close to his heart.

However, keeping all the above in mind, there can be no doubt but it was his association with Cappamore Show that Paddy will be forever remembered. He was “Mr Cappamore Show”.

He became secretary of the show in 1960 having served as assistant secretary the previous year. He held this post for over sixty years and there can be no shadow of a doubt but the success of this rural agricultural show owes more than can be assessed to the amazing work and interest Paddy gave to the show down through the years.

His people skills are legendary. He had an unerring ability to “pour oil on troubled waters” and bring people together for the greater good. He could relate to both young and old and recruited many young people into the committee keeping the organisation fresh and modern and ensuring its survival into the future.

He travelled the length and breadth of the country supporting other agricultural shows. He fostered a huge network of contacts all of whom had the greatest regard for Paddy. He was known to ring people to pass on his personal and Cappamore Show wishes at Christmas, and at times of bereavement.

His hand written letters were also much treasured by those lucky enough to receive one. The esteem in which Paddy was held by people far and near was exemplified by the huge outpouring of sympathy and attendance at his removal and funeral.

Cappamore Show is the envy of many similar shows with its long list of sponsors. Most of these were recruited by Paddy – a man impossible to say “no” to! He had his own infallible filing system which would challenge any computer. He never forgot anything and could put his hand on any piece of information at a moment’s notice.

Paddy was interested in every aspect of the show from the craft and cookery exhibits to the cattle, horses and show jumping classes. He embraced all the changes down the years – from changes of venue to the change from midweek to weekend event. He was acutely aware that to survive change was necessary.

He was stoical about the cancellation of the show in 2020 and in 2021 but it didn’t stop him thinking of the show, even in very recent times he was planning the 2022 show scheduled for Saturday, August 20.

A life-long pioneer, Paddy was the life and soul of every party. He was always ready with a story or joke to add to the gaiety of the gathering. One of nature’s gentlemen, his unique personality will be sadly missed.

There is an old but true saying that “behind every good man there is an even better woman”. How true is this when we think about Peggy – Paddy’s life partner of many years. Peggy herself was a former member of the show committee and continued to back Paddy in all his endeavours with full support and understanding. The terrible and untimely loss of their beloved daughter Helen was an immeasurable blow to this family but Helen’s children Jamie and Aoibheann live close by and gave Paddy and Peggy much consolation at that awful time. Sons, Ger and Seán are both involved in agricultural pursuits.

Paddy was predeceased by three current show members since Covid-19 upended our lives in March 2020 –  Mairead Finnan, Timmy Butler and Simon Tierney. We remember and miss them and when allowed we will commemorate them all at a dedicated Mass.

We are fully aware that picking up the pieces of the show following the two years of cancellation and the huge loss of our guiding light Paddy will be a mammoth task. However, we hope that Paddy’s spirit will be there to guide us and lead us on the right path to resurrecting this iconic and important local event.

His was a life well-lived. He was loved and respected by family and community – what more can any of us ask of our allotted time on earth? Ní bheidh a leithéad arís ann.