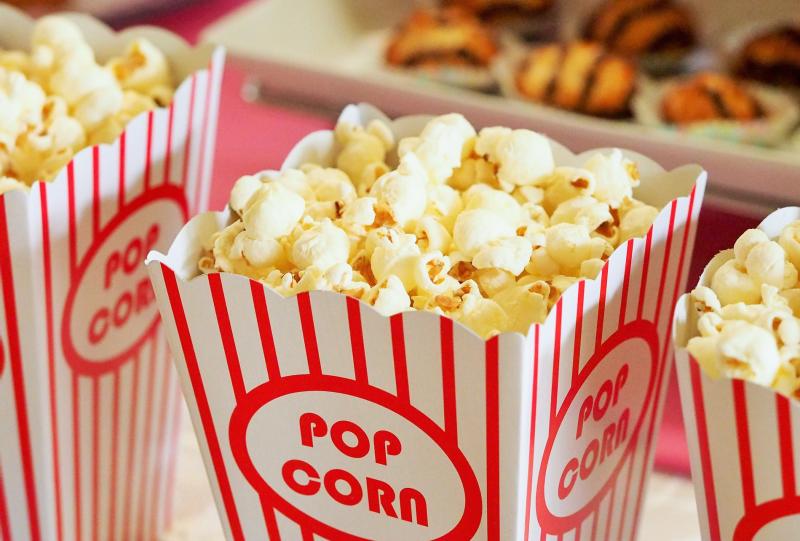 The 4th installment in George A. Romero's undead series zooms in on a very divided Pittsburgh where the rich live in tall, safe glass houses looking down on the poor in the slums below fighting for their lives. As always social commentary is to the forefront of a Romero film but he lashes on the gory thrills and spills too. An intelligent and exciting watch, with nice turns from Dennis Hopper, John Leguizamo and Asia Argento powering the story.

Casey, Claire and Marcia have been kidnapped by Kevin. Or is that Patricia? Or Dennis? Or Hedwig. Or the beast? M. Night Shyamalan's 2016 thriller is a ludicrous watch, one bordering on offensiveness at times but James McAvoy gives such a committed performance as a sympathetic monster that you'll be welded to the screen throughout. Seriously, he's magnetic in this. Anya Taylor-Joy more than holds her own too.

Marguerite Dumont lives to sing. It's her passion in life. But she's absolutely dreadful at it and the people who love her are loathe to shatter the illusion she's built for herself. Then one day she decides to really go for it. This French film from 2015 is based on the life of Florence Foster Jenkins and is a more thoughtful and sensitive take on her story than the American version from 2016. But you'll still be entertained by it all. Catherine Frot excels in the lead role.

It's been twenty years since James Dean died in a car crash and his fan club is meeting up to mark the occasion and catch up. But as so often happens, meeting old friends can often open up old wounds. Robert Altman's adaption of the broadway play is a joy to watch, with nifty camerawork used to avoid a stagey feel and some wonderful performances from Cher, Sandy Dennis and the always reliable Karen Black.

Mary Stuart has become the Queen of Scotland. Her cousin Elizabeth is the Queen of England and is worried about Mary's claim to her throne. A worry that sets in motion a dark chapter in British history. Purists will whinge about inaccuracies in the story but when you have Saoirse Ronan and Margot Robbie both doing masterful work in a lovingly depicted past who cares? Be warned, some scenes will disturb.

After her father's death Shaun heads to his high tech home to deal with his estate, not realising she's put herself and her children in harms way by doing so. This throwback to the home invasion films of the early 90's isn't perfect but it's a solidly built thriller featuring nasty bad guys, some bruising and bloody encounters and a rousing performance from Gabrielle Union as a mammy who'll do anything to protect what's hers.

A young boy grieving for his father is taken under the wing of a gang of skinheads. Life is sweet until a face from the past turns things upside down. The best British film of the 21st century. A stunning look at the horrible dark underbelly of life in Margaret Thatcher's Britain. Shane Meadow's directs an astounding cast of (then) unknowns in a film that will bowl you over. Stephen Graham & Vicky McClure are the stand outs.

Scumbag LAPD cop Dave Brown is in trouble once again. He's been filmed beating a suspect and his career is in trouble. He's also outrunning his past and he doesn't know how much longer he can keep going. From the pen of James Ellroy comes a dark, nihilistic and troubling look at the people who "protect" us. It's tough to watch but a captivating Woody Harrelson will grip you. The supporting cast is fantastic too, with way too many to name here all adding to the mix.

Three men, Blondie, Tuco and Angel Eyes, have their sights set on a treasure trove and backstab and connive their way across the desert to get to it first. The final part of Sergio Leone's spaghetti western trilogy is an absolute masterpiece, astonishing in it's scale, jaw dropping in it's cruelty and beauty. Clint Eastwood, Eli Wallach and Lee Van Cleef do amazing work and the music from Ennio Morricone will just carry you off into another time.

A man sets out to find a cure for his daughter after she's bitten during a zombie attack. Ya, I know it's yet another zombie film but this one is a far deeper and more personal story than the usual gorefests. Young Maggie is played by Abigail Breslin and her father is none other than Arnold Schwarzenegger who honest to god, does some real acting for once as a man struggling to come to terms with his worst nightmare.

The curator of a Stockholm art gallery has having a hard time. He's been the victim of a robbery and he's also in the middle of setting up a rather unique art exhibit. One that's bound to court controversy. This satirical look at the mores of the art world is an enthralling watch where you'll cringe as much as you'll laugh. Claes Bang, Elisabeth Moss & Dominic West do fine work in a film that's quite long but worth your time.

WW1. Not the most romantic of times but Lieutenant Henry and Nurse Catherine made it work, even when their relationship was torn asunder by bombs, bullets and jealous friends. This semi autobiographical work from the pen of Ernest Hemingway still works 89 years after it's initial release as a paean to the power of love even under the worst circumstances. Gary Cooper and Helen Hayes do everything right.

Camille is a teen feeling lonely after a boarding injury. She's lost, friendless & generally not liking her New York suburban life until the day she discovers a girl gang of skateboarders and everything changes for her. A low key, charming, beautifully created feminist coming of age story that feels fresh and vital despite covering familiar ground. Real life skater Rachelle Vinberg does nice work in the main role.

Chappaquiddick, Massachusetts. July 1969. Mary Jo Kopechne is the unfortunate passenger in a car driven a man wielding a famous name. A true life take that went under the radar on it's initial release but it's an important and topical look at the privilege afforded by fame & power and how it will save you every time. Kate Mara and Jason Clarke lead a superb cast in a film that deserved a bigger audience than it got.

A teenager and her unusual family are living in the wreck of an old castle and struggling to get by as their father deals with writers block in his attempt to create that difficult second novel. Then some visitors pop by and things get romantically complicated. A funny, whimsical and exceedingly British look at the trials and tribulations of young love. Romola Garai, Rose Byrne and the estimable Bill Nighy all work well together.

The two great loves in Alan's life are cricket and a classmate called Anne. Both are causing him to fail miserably at school but he doesn't care. He's a dreamer, and an idealist and he's optimistic about the future. Michael Apted's little love story from 1982 is set in post war Britain but it's telling a tale that could be set anytime and anywhere. An endearing, funny and humane story. John Albasiny and Alison Steadman do lovely work.

Andrei's a very unpleasant man and he's about to find out exactly how hated he is when a disparate group of people turn up to his apartment looking for revenge. First off, if you are in any way squeamish, don't bother with this but if you like your humour black and your violence bloody then you might just have a good time with this dark Russian comedy. Vitaliy Khaev and Aleksandr Kutnetsov ably lead an interesting cast.

Four criminals take a subway train hostage in New York City. If their demands aren't met hostages will die. It's up to a transit police lieutenant to sort the mess out. This 1974 film is a masterful thriller. Well paced, funny, economical, tense, filled with memorable characters and is far superior to the later remake. Walter Matthau and Robert Shaw are brilliant in the lead roles. A film that's well worth staying up for.