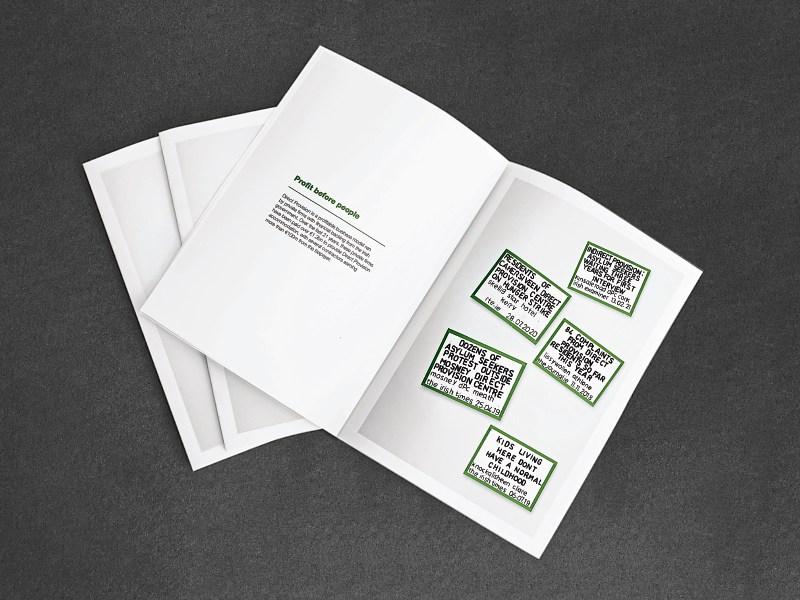 MARIA McSweeney, a recent graduate of Limerick College of Art and Design, is determined to use her creativity to good, social, effect.

As a young woman whose art-work has a definite, political, tenor, her latest project, The Dp postcard project is aimed at raising awareness about Direct Provision centres. She also hopes that it will raise money for MASI, the Movement of Asylum Seekers in Ireland.

“It is based around incidents that have happened in Direct Provision centres over the years,” Maria explains. These incidents, reported in various newspapers, she has put on postcards and reproduced in a booklet that is now for sale.

“When you see them all together, you see the problems in the system,” she explains. “You see there are a lot of injustices happening.”

As an art undergraduate at LCAD, Maria says a lot of her work was “politically situated” but last year, she made contact with a voluntary organisation aimed at supporting asylum seekers called Consider a Cake, where volunteers bake a cake for the various celebrations that take place within Direct Provision centres. It could be a birthday, or St Patrick’s Day or Easter, explains Maria.

As a baker herself, Maria got involved and through talking to other volunteers came to a deeper understanding of what life is really like for asylum seekers. “After the Mother and Baby Home revelations, I found a parallel that they are still institutionalising people in Ireland,” she says. “I wanted to look into it further and make more people aware.”

As part of the undertaking, Maria also sent the postcards to the Minister for Justice. “I haven’t got a response yet. I don’t know if I will. I just wanted to be actively doing it,” she says. “It might inspire people to write as well. Small little changes can create a big change.”

Currently, there are over 7,000 people living in 44 Direct Provision centres and 36 emergency accommodation settings around the country. Almost 1,100 of these are children.

Originally from Co Cork and now based in Limerick, Maria’s main medium is photography, experimental photography, but she often combines that with the written word.

You can acquire your copy of The Dp postcard project by emailing Maria at MariaMcs112@gmail.com or on Instagram on mariamcs__photography or through her Facebook page. Each booklet costs €10, with €7 euro going straight to MASI and €3 to cover print and post costs.