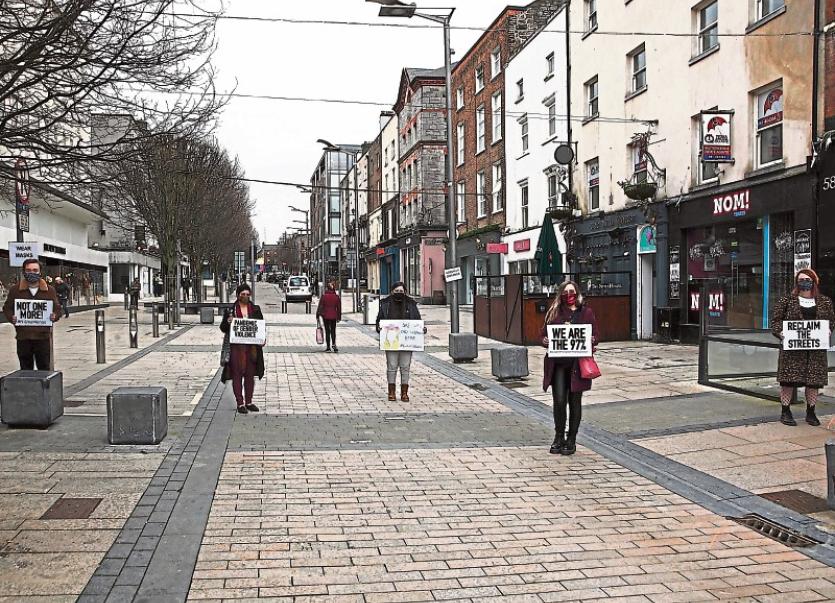 THE decision to initiate legal proceedings in relation to a demonstration in Limerick city centre to highlight the surge in gender violence during the Covid-19 pandemic has been strongly criticised.

One of the alleged organisers of the event – which took place on March 18 – has been issued with a €500 fine and will face prosecution in court if she does not pay the fine.

Around 20 people gathered at Thomas Street for the demonstration which was organised by ROSA in the wake of the abduction and murder of Sarah Everard in London and in solidarity with vigil attendees who were subsequently attacked by the Metropolitan Police.

Those who attended observed social distancing guidelines and all of the participants wore face masks. There was a discreet garda presence throughout and officers were observed engaging with a number of those present and noting their details beforehand.

Former TD Ruth Coppinger, says it is incredible that of all the gatherings that caused public outrage during Covid, the state is choosing to use the Public Health Act to prosecute a member of ROSA for highlighting a public health and safety issue for women.

“No prosecutions were taken by gardai under this law for Golfgate, an indoor event attended by the well-connected in society. Nor was any taken against far right covid deniers who marched without any health precautions. Dublin footballers who gathered for training have also been told there’ll be no prosecutions.  Instead, the state is prosecuting women and young people who  took part in stationary and socially distant standouts that were fully Covid-19 compliant and on an essential issue of the huge spike in gender based violence,” she said.

“When this legislation was introduced, it would clearly have been seen as designed to target  dangerous, indoor or crowded events where public health was being flagrantly ignored, not a symbolic standout on gender-based violence,” she added.

The Limerick woman who has  been issued with the fine has confirmed to the Limerick Leader that she is to seek legal advice before taking any action.

If she does not pay the fine, a court summons will issue and the matter will be brought before Limerick District Court later in the year.