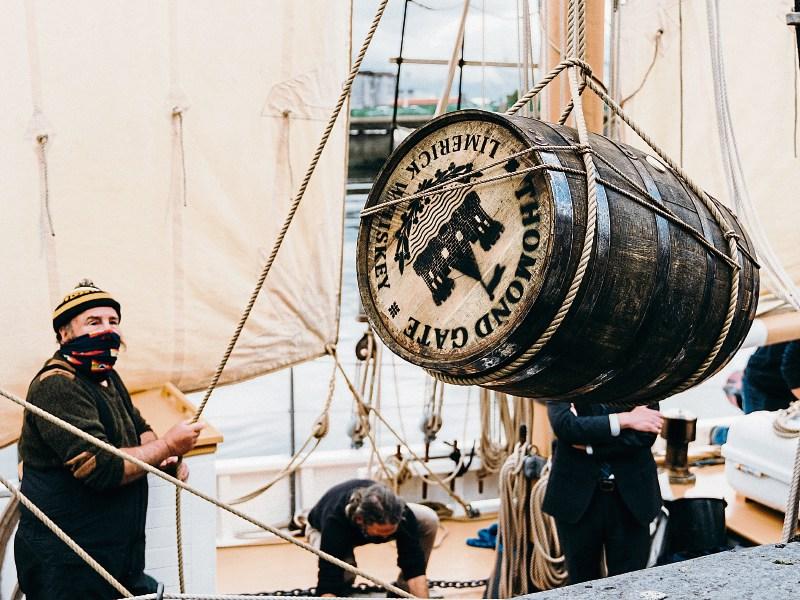 A LIMERICK man is bringing back the proud tradition of whiskey distillery in the city.

It was more than a century ago when Thomond Gate whiskey closed its operation at Brown’s Quay.

And after a decade of working in the finance and fintech sector in London, Ballyclough man Nick Ryan returned to his home county with a dream of recreating that perfect dram – and in doing so, ensuring Limerick whiskey is put back on the map.

An awesome day yesterday, marking a milestone of putting Limerick whiskey back on the world stage, a local shipment of our Pot Still spirit made from Limerick Barley, sailed down the Shannon to @WhiskeyGate on board the @ilenproject #Limerickwhiskey #whiskeybonder pic.twitter.com/qvVzb5EmML

Nick has even bigger plans to open a bonded warehouse, where the art of whiskey creation can be showcased.

“Limerick had a lot of distilleries, the most prominent being one in Thomondgate which traded under a number of names and was owned by a number of companies. It closed in 1919 at Brown’s Quay in Thomondgate. For me, it was something I was passionate about – to revive and restore the prominence of very much a Limerick whiskey,” he explained.

Nick is growing a few acres of barley for the whiskey at a site just outside the city. Understandably, it’s precise location is a closely guarded secret.

But what is known is an exciting project in the pipeline to build a bonded warehouse.

He explained: “The plan is to mature the barley and we plan on erecting a bonded warehouse to mature the whiskey here in Limerick as well as bottling it. We will be seeking planning permission, and have ambitious plans for this. It will be sufficient for maturing significant quantities of our whiskey as well as to bottle it, as well as having an experience there.”

“It’s going to be purpose-built, and it’s our long-term vision to bring the whole process of producing whiskey back to Limerick. That includes distilling it. We are taking a staged approach to it. First of all, we are sourcing and finishing liquid in our own casks, the second stage is producing liquid up the country, then the final stage is we are going to be producing it. It’s a very step-by-step organic process.”

In the next five years, the businessman – who is largely working alone at the moment – hopes to have a team of around 10 people in place.

Visit any off-licence or supermarket, and you will see a range of different brands of whiskey. So Nick’s will need to stand-out, with it’s unique rotund bottle a first step to this.

How else does it differ?

“When it comes to the large brands, a lot of them will be made in multiple casks. That means they will make a blend of sorts. It might be a single malt, or a single pot fill, but in essence, it’s enlarged in many different casks. What makes my whiskey unique is I do single cask releases. For me, it is about showing whiskey in its truest state,” Nick explains.

He has sourced casks from all around the world to allow the whiskey to be finished.

For many who are not familiar with the fine art of distillery, the importance of different casks is possibly lost.

Nick uses an analogy of a Michelin star chef cooking regular food, saying: “It all comes down to the execution.”

He added: “You could have exactly the same wood, exactly the same spirits. But because of the way they are positioned, the location they are matured in. Also, sometimes just the way the cask interacts, it can make it taste different. It could be more exposed to a bit of a draft, versus being more sheltered.”

This all adds to the feeling that whiskey truly does capture a moment in time.

“Each time you get a bottle of my whiskey, they will vary. The [difference in] taste in the grand scheme of things to the layman won’t be too dramatic from one to the other. But for those who enjoy their whiskey and really savour it, they will notice a difference between one cask and the other. And that’s what I think makes it so special,” said Nick.

“Whiskey is really capturing time and putting it in a bottle. By having two unique casks, you’re making snapshots of two unique elements which will never be repeated. I like the idea they are expressive of that moment,” he added.

Starting a company can be an expensive business – beginning a whiskey company is on a different scale cash-wise.

That’s why Nick has come up with a number of interesting methods of helping raise money for continued production.