Limerick farms are ideal to land a helicopter but not an air ambulance, stresses new campaign 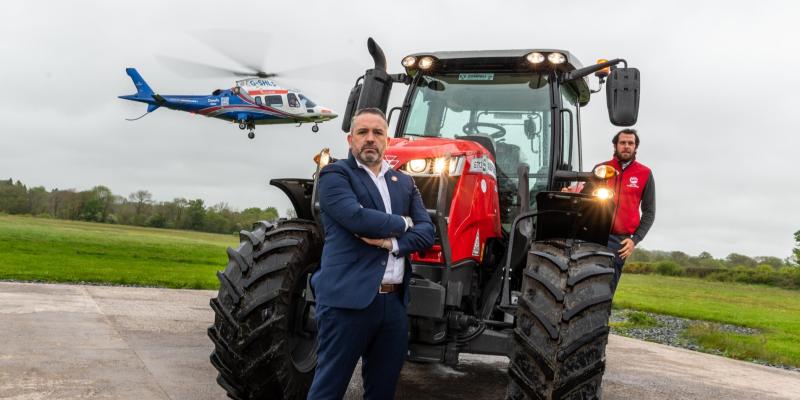 IRISH farms are a great place to land a helicopter - you just don't want it to be ours, say Irish Community Air Ambulance (ICAA).

They have partnered with Macra na Feirme during a busy time on farms. ICAA was tasked to 14 incidents across County Limerick during the first three months of 2021

ICAA and Macra have launched a joint campaign to appeal to all rural communities to exercise care as activity in rural Ireland increases during the summer months.

A busy silage season, increased traffic on the roads and more children moving about farms all combine to present an increased likelihood of serious incidents that could result in an air ambulance being tasked to rural locations.

Statistics from the ICAA show that the summer months are the busiest for the heli-med service, with the highest number of callouts during 2020 occurring in July. Road traffic accidents account for the most incidents, with farm accidents and falls from heights requiring a regular response from the Millstreet-based service.

There have been 38 farming-related taskings so far in 2021. These include incidents involving PTO, machinery, falls from heights and animal attacks. In total, the service has responded to 233 calls since the start of the year.

While Cork, Kerry, Clare, Limerick, Tipperary and Waterford are the counties most likely to require the air ambulance, the helicopter was also tasked in 2021 to counties Kilkenny, Wexford, Wicklow and Galway.

The ICAA and Macra are launching a social media campaign to highlight that while the service is available to those in need, exercising care and engaging in best practice can dramatically reduce the risk of incident.

John Keane, president of Macra, said summer brings with it some of the busiest times on Irish farms, with silage season coinciding with a lot of outdoor activities.

"Farmers are aware of the many dangers on farm, and always endeavour to ensure these risks are mitigated. However, we know that accidents are going to happen in the weeks ahead, and we are appealing to people living in rural Ireland to stop and think about what they are doing, and whether it is safe.

"Not every accident will result in death, but many cause serious injury and all cause disruption. We are grateful that the Irish Community Air Ambulance service can respond, but the question for farmers is simple. How would you feel if it had to land in one of your fields?" said Mr Keane.

The Irish Community Air Ambulance works in partnership with the National Ambulance Service, and is within 30 minutes flying time of any location in Munster.

CEO of the Community Air Ambulance, Michéal Sheridan said their crew is ready to respond to every call, but they see from our taskings last summer that June and July are amongst their busiest months.

"As a rule, we are only ever called to the most serious incidents where patients have suffered significant trauma. Our message to farmers, in conjunction with Macra na Feirme, is to please think of risk as they go about their day. Our message is simple. Irish farms are a great place to land a helicopter - you just don’t want it to be our air ambulance," said Mr Sheridan.

The campaign has also been given support by the Minister of State at the Department of Agriculture, Food and the Marine with responsibility for Farm Safety, Martin Heydon.

Minister Heydon added: "I would like to thank the Irish Community Air Ambulance and Macra na Feirme for undertaking this campaign, which chimes very much with the Government’s “Be Summer Ready” campaign. Now is an important time to remind farmers and all those who may visit farms of the need to be aware of all the risks.

"Tragically every year farming accounts for over 40% of all fatal workplace incidents nationwide. It is time for a cultural change towards farm safety, where we all play our part in driving down the unacceptably high levels of farm safety incidents. So please remember 'plan a safe silage season'."