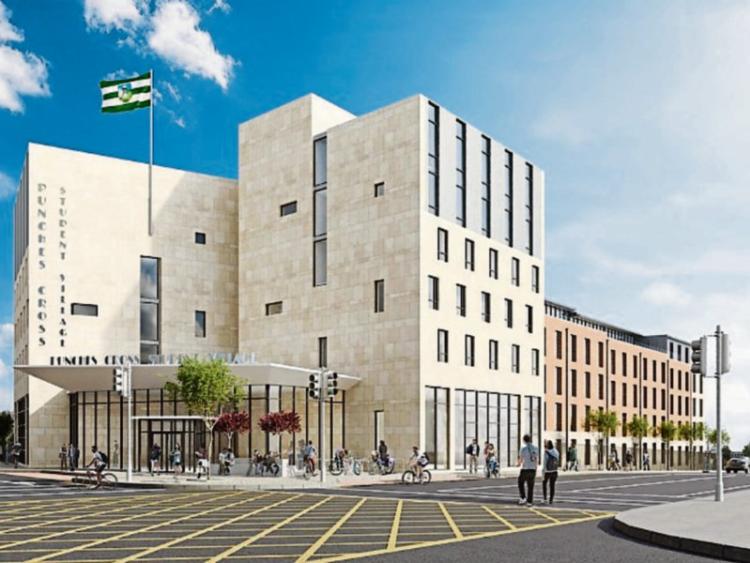 PLANS for a new student accommodation development in the city are back on the table, the Limerick Leader can today reveal.

Despite An Bord Pleanala rejecting proposals for a new multi-storey development at the old John Moloney garage by Punch’s Cross last year, Cloncaragh Developments has returned with a fresh planning application.

It will be made to the national planning authority this week – and due to the fact more than 100 units are being provided, it is being fast-tracked under laws designed to make the delivery of housing quicker.

According to the proposals, 100 apartments accommodating over 300 students will be built, with the facility designed to meet the needs of those studying at Mary Immaculate College, the University of Limerick (UL) and the Limerick Institute of Technology (LIT).

Both UL and LIT have ambitious growth plans.

In a statement, Cloncaragh Developments said the project will “transform and regenerate” the former garage site, which has lain idle for 20 years.

“It will also be helping to address Limerick’s student accommodation and housing needs in the city,” they added.

Derick Walshe, Cloncaragh, said; “Today’s announcement demonstrates our commitment to Limerick city and its future.  Limerick is the third largest city in Ireland and has a large student population.  This development will help to address the housing need for many students who wish to study in the city”.

He believes by adding the housing stock, it will help rents in the locality become more affordable by increasing supply.

“Mary Immaculate College is located in close proximity to the proposed development. The college is supportive of this project as it will allow for students to live close by in quality fit for purpose accommodation.  Mary Immaculate College is a well-recognised and growing third level educational institution whose reputation attracts students from all over Ireland and internationally and it is important that they have appropriate accommodation available to meet their needs. The University of Limerick also plans to develop a campus on Sarsfield Street and this will also feed into the demand for this accommodation type,” added Mr Walsh.

As part of the development, over 400 bike storage stands will be delivered, with adequate storage and outdoor amenity spaces for residents.

Below: an overhead shot of the proposed student village 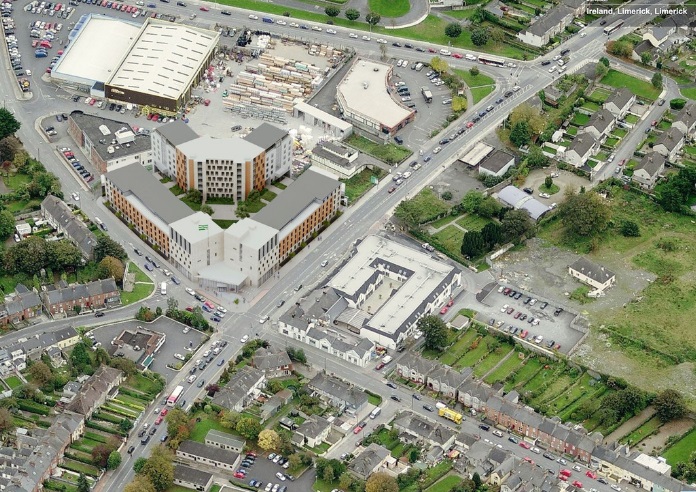 The development will also see improved local infrastructure, such as widened footpaths, a proposed road widening on the Rosbrien Road to allow for an extra traffic lane; and a new centrepiece plaza at Punches Cross.  The accommodation will be fully supervised and managed with security and concierge services for its residents”.

Mr Walshe concluded: “We want to see the site turned into something that contributes economic positives for Limerick City as well as meeting the rising demand for quality accommodation.  Limerick City is currently undergoing significant regeneration and it is important that critical infrastructure such as housing keeps up with demand, so that our city can continue to flourish.  It is our intention, if planning permission is granted, to begin construction as soon as possible and this in turn will also stimulate local employment in Limerick’s construction sector.”

There has been a guarded welcome to the proposals, including from Labour councillor Joe Leddin, who has said he welcomes the fact that on-site security will be present in these new plans – something lacking from the rejected proposal.

“It’s a welcome move, because that development site has been derelict for a long time. But it’s important the local community have relevant contact with the management company to ensure good relationships,” he said.

Cllr Daniel Butler, Fine Gael, added: “I hope lessons were learned from the last time this application was before us and that local residents are met with and that their genuine concerns are addressed. Previously, local residents were not engaged with in any way and their voices largely ignored and it is important in showing they plan to be good neighbours that they actively engage with them this time around.”

Revised planning application to build over 100 apartments to facilitate student accommodation is being submitted to An Bord Pleanala at the former Texaco site at Punches Cross pic.twitter.com/0ym6xD2v8m