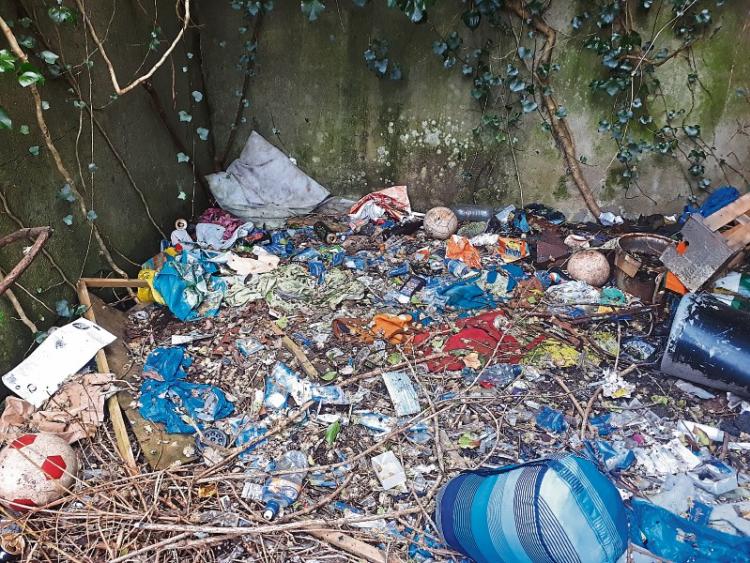 Some of the remains of the drug den in Farranshone

MOVES are being made to shut a drink and drugs den which has brought misery and fear to one of Limerick’s oldest neighbourhoods.

Locals in Farranshone have been left reeling after a laneway behind their homes has become a haven for outdoor drinking and drug use.

Multiple calls have been made on the council to install a code-locked gate to ensure the passage behind the Shelbourne Avenue is closed off to residents only.

For the last three years, they say they have been unable to use the back entrance of their homes over people drinking and taking drugs. As well as cans and bottles, there are used syringes, condoms and foil in the alley.

Tom McCarthy, who has lived locally for over 30 years said: “Generally in the mid-morning or early afternoon a guy comes down with a rucksack and he distributes whatever is in there. They will sit down here and spend the afternoon and doing whatever else they want to do with needles. We also see silver paper. I don’t know what it’s used for, but it’s certainly involved in drugs.”

This, he says, has led to residents feeling unsafe.

“It’s a big worry. You don’t know what is going to happen with our homes so close, if they’re high on drink and drugs.”

Vadi Sundaram works night-shifts and often arrives back in the morning to see people sitting in the den drinking or smoking.

“It makes me feel awkward and insecure. For that reason, I’ve stopped using my back door. Suddenly when you open the gate, two people are standing in front of you with a glass or can or beer,” he said.

As well as the gate, there have been calls for a clean-up of the area, which is overgrown. They have been supported by Cllr Azad Talukder, who has made representations to City Hall.

However, he’s not heard anything back since he first made enquiries in February, and a local authority spokesperson did not respond to a request for comment from this newspaper. It’s understood though, that the issue of a gate is being looked at.

Cllr Talukder said: “What I’ve heard from the residents here is very disappointing. I'm very disappointed with council. For more than two years, residents have tried to sort out this problem. There has only been very little progress.”

"This is among the oldest communities in Limerick, a very established community. I don't think any family member can come down this back alley. I wouldn't bring my children into this environment,” said Cllr Talukder, who is the deputy mayor.